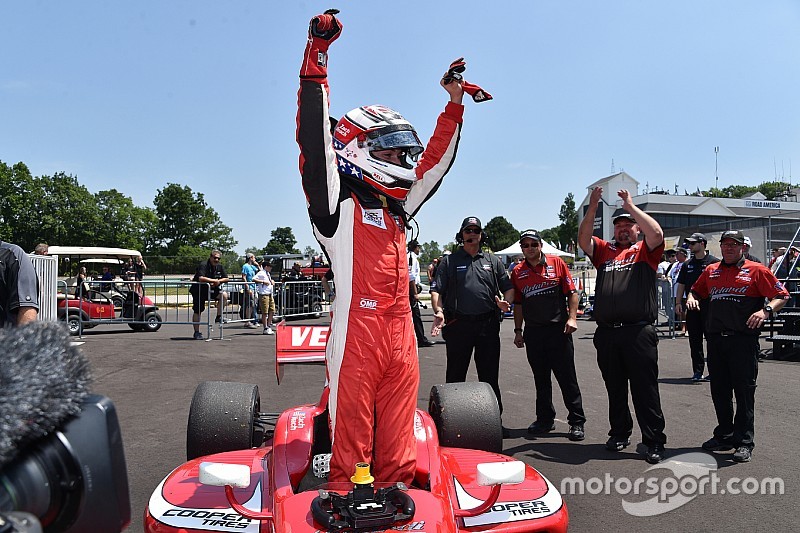 Belardi Auto Racing team manager John Brunner says that Zach Veach, who finished fourth in the Indy Lights championship, would be an asset to the Verizon IndyCar Series in 2017.

Veach, who first started in Indy Lights in 2013, finished third in the 2014 championship with Andretti Autosport and scored three wins in the final season of the venerable Lights spec car of the time.

Financial struggles then forced him to take a sabbatical in ’15, but he returned in 2016 with Belardi, and drove the #5 Dallara-Mazda IL15 to three wins.

He also scored more points than any of his rivals over the final 10 races of the season, and was said to have set startling lap times in an IndyCar test at Sonoma for Ed Carpenter Racing.

Brunner believes the 21-year-old Ohioan has now done everything he can to put himself on the wishlist of IndyCar team owners.

“I hope Zach gets the opportunity,” Brunner told Motorsport.com, “because he is absolutely ready for IndyCar. He’s more than capable of holding his own out there.

“He was coming on so strong in the second half of the Lights season, but to be honest, he was strong all year. He should have won the first race, his first race back in a car for more than a year. It was very, very impressive.

“He catches people off-guard because he’s a little guy and so friendly but when the helmet goes on, he’s a different person.

“Zach is very quick and aggressive, but also very smart.

Belardi’s small size is an advantage

Belardi Auto Racing won the 2014 Indy Lights title with Gabby Chaves, while this season Veach and Felix Rosenqvist took a total of six wins for the squad – more than any other team. And although Brunner refused to comment on it, the team has hired Pro Mazda champion Aaron Telitz for 2017.

Brunner says he feels the team’s focus on Lights has proven to be key to its appeal to the talented drivers.

“As part of this little team – there’s just eight of us going to the races – you start out feeling you’re at a disadvantage trying to compete for the best drivers because we don’t have an IndyCar team to offer them. But on the positive side, that means the Lights championship is our main focus; every dollar that comes in the door is going to our Lights team. There’s nothing being skimmed off the top to help fund an IndyCar entry.

“So I think more young drivers are starting to realize that might be a good way to go. Because they know that if you’re winning Lights races, all the IndyCar teams are going to be paying attention. It doesn’t matter that we don’t have an IndyCar team to move up to – the best kids are still going to get a shot at testing, just like Zach did with Ed Carpenter’s team, and Felix did with Ganassi. They’re both competitive drivers so the IndyCar teams wanted to check them out.”