Ups and downs for Schmidt Peterson Motorsports at 2015 Indy 500 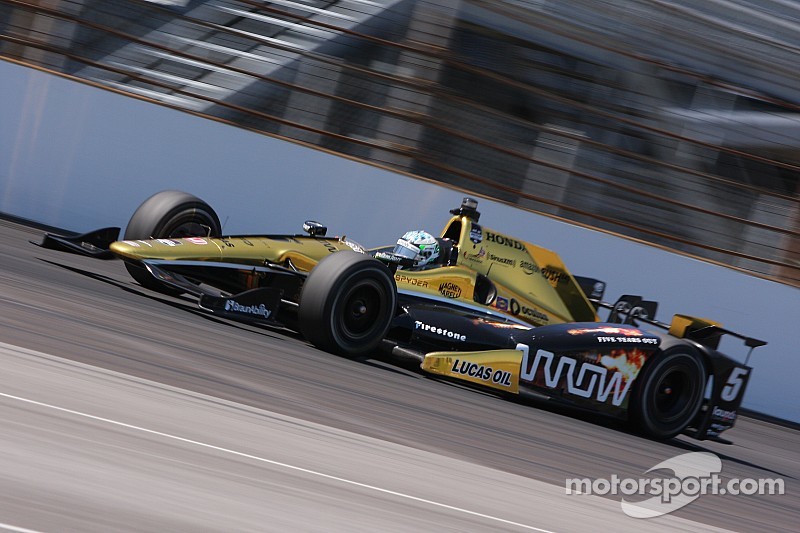 Ryan Briscoe, filling in for the injured James Hinchcliffe, drove an impressive race, advancing 19 spots to finish in twelfth place.

Indianapolis, IN - Ryan Briscoe and James Jakes earned twelfth and eighteenth place finishes, respectively, on Sunday for the 99th running of the Indy 500 at the Indianapolis Motor Speedway. Teammate Conor Daly did not start due to a mechanical issue.

Daly's issue in the No. 43 Smithfield "Fueled by Bacon" Special happened during the warmup laps of the race. A fuel leak caused the 22-year-old, Noblesville, Indiana native to pull his car over on the back stretch when the rear end caught fire. His crew worked hard to make the necessary repairs but ultimately, Daly didn't get the second start at Indy that he was hoping for.

It's the Indy 500 and we had a good run. We moved forward from the last row up to twelfth.

"We had a fuel leak that caused a fire in the back of the car and burned some key items, so sadly, that was our end of the race before it even started," said Daly. "It was a real shame for sure. These things happen in racing though so all we can do is look forward."

Ryan Briscoe, filling in for the injured James Hinchcliffe, drove an impressive race, advancing 19 spots to finish in twelfth place. Briscoe's No. 5 Arrow Electronics car was spun and stalled during first-lap contact, but some focused driving, coupled with his crew's successful pit stops ended with a solid finish.

"I just want to thank everyone for the opportunity to jump in the car at the last minute," said Briscoe. "We're all thinking of Hinch and I was thinking of him during the race as well.

"It's the Indy 500 and we had a good run. We moved forward from the last row up to twelfth. Not quite enough to get right up there but I had a lot of fun. The pit stops were phenomenal. I really want to thank everyone at Arrow Electronics, Lucas Oil and all the other partners on the team. It's been a whirlwind for the last four or five days for me but I've gotten to meet a lot of great people, made a lot of friends already and I really wish the SPM team the best for the rest of the season."

James Jakes, who started 20th, managed to avoid attrition throughout the 200-lap competition on the 2.5-mile oval. Near the end of the race, fuel and tires both looked to be potential strategies to advance further, however the yellow flags didn't play out in favor of the British driver.

"It was a tough day, really, for the No. 7 SPM MediaTech Oculus car," said Jakes. "The car was pretty good in the first stint but then we just seemed to let the balance get away from us a little bit. It was a long afternoon and we were right there in the end. Everybody knows that Chevy has a bit of an advantage so we really have to put it together from a Honda point of view but we're looking forward to Detroit next week and we'll move on."

In less than one week, the Verizon IndyCar Series heads to Belle Isle Raceway for the "Dual in Detroit" race weekend. Schmidt Peterson Motorsports will announce a temporary replacement for Hinchcliffe, and the No. 5 and No. 7 cars will be on track Friday for the first practice and qualifications for race number one.

Chaves 16th & Rookie of the Year at Indy