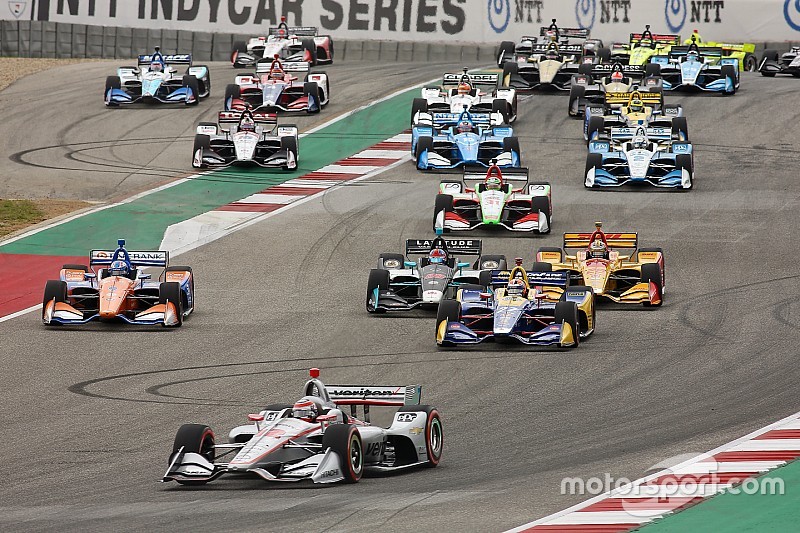 In IndyCar Spring Training at Austin, drivers repeatedly ran wide at Turn 19 and laps that included major violations of the track limit there were under threat of deletion.

Drivers and data acquisition engineers believed using the runoff could shave up to 0.3sec from lap times because it opened up the cornering arc so drivers could carry so much more speed through the turn.

Eventually, to avoid controversy and debate over what was and wasn't regarded as a track limit violation, IndyCar gave the go-ahead for drivers to use the run-off area as part of the course.

Polesitter Will Power was unimpressed by IndyCar’s decision because it made the turn so much easier. But series super-rookie Rosenqvist, who has raced on many other modern courses around Europe, welcomed the relaxation of the rules.

“I'm not a fan of [series-imposed] track limits,” he commented. “That's why I like racing in America, because you don't really have track limits: you go off in this grass, gravel or wall! Here we come into that problem where you have the track limit.

“I'm a fan of opening it up. You know it's going to be the same for everyone. They [Race Control] are not going to look at if this guy was one millimeter over the line or not, which is a bit ridiculous.”

James Hinchcliffe collided with Rosenqvist off the track at Turn 19 to cause the caution that cost leading trio Power, Alexander Rossi and Scott Dixon any chance of victory.

Asked for his view on IndyCar's approach, second-placed finisher Josef Newgarden said: "It's a fine line. The positive is there's no interference, which is good. I think we like when race control has less interference.

"The Turn 19 thing, I think we need to look at for next year. I didn't have a big problem with it. Seemed like it was fair enough. You got a lot of side-by-side, you had a place to go if you got knocked off. You had to know in your mind that's racing ground.

"Again, it just takes out that equation where Race Control can get involved. At the end of the day, sometimes that's a good thing. Fine line, good and bad. Overall I was OK with it."

Ryan Hunter-Reay, who completed the Austin podium in third, said he agreed with Newgarden.

"We have to look at it next year," he said. "Race Control had its hands tied on this. In the open test here, there were hundreds of violations.

"You don't want to be watching a race, cars start peeling off the track from penalties from Race Control. Why? 'He was an inch-and-a-half wide from this corner.' Nothing we can do about it. Just have to come back next year with a better solution.

Ahead of the race Max Papis, who advises series race director Kyle Novak in race control, explained to Motorsport.com that “the intent of IndyCar has been to not have to enforce track limits when it’s not needed".

Papis added: “During the test, there was not a factor that suggested running beyond the curb would give a clear advantage.

"So it was decided that if you see someone run behind the curb exiting Turn 19, their lap will still count. We’re all about consistency and predictability and we’ve been putting a lot of thought behind it.

Power “couldn’t have been unluckier” with COTA caution