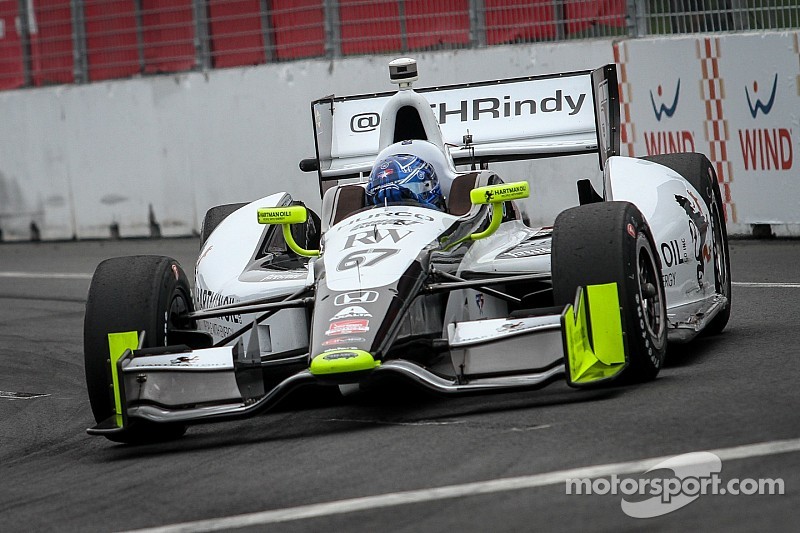 On the first lap of Race 1 Newgarden's No. 67 Hartman Oil Dallara/Honda/Firestone machine was hit from behind in an incident involving six cars.

TORONTO - Josef Newgarden and Sarah Fisher Hartman Racing (SFHR) endured a true doubleheader Sunday, July 20 on the Streets of Toronto after the Verizon IndyCar Series postponed Race 1 of the Honda Indy Toronto on Saturday, July 19, due to a rain-slicked circuit.

SFHR worked through on-track incidents and changing weather conditions, but the dice did not roll in the team's favor. Newgarden was credited with 20th place in Race 1 and 13th in Race 2.

"Toronto wasn't kind to us this weekend," Newgarden said. "We had a fast car, the crew was stellar and the team effort was really good. There were just a lot of scenarios that didn't fall our way."

On the first lap of Race 1 Newgarden's No. 67 Hartman Oil Dallara/Honda/Firestone machine was hit from behind in an incident involving six cars. With significant damage to the right rear suspension, SFHR made the call to repair the car under red flag conditions, resulting in a drive through penalty on Lap 4.

"The crew did a great job and we got the car fixed," Newgarden said. "We didn't lose a lap which was stellar. We had to serve a penalty for it but not losing a lap was important."

Newgarden clawed his way from the back of the field to 11th, but on Lap 63 of 65 an attempt to pass Will Power spun the No. 67 car in Turn 3. A broken toe link and right rear suspension prevented the 23-year-old from nursing his Honda-powered car to the checkered flag.

"At the end of the first race I pushed too hard and tried to make too much happen," Newgarden said. "I gave it a shot but I pushed too far."

"We tried to make the slicks (tires) work when a lot of people came in for rain tires," Newgarden said. "We would have gone way in the back of the line if we switched to rain tires and at that point in the race you have to try and make it work if you think you can until your next pit stop."

Newgarden led Laps 14-20, but as the rain became heavier the Nashville-native spun in Turn 11 and immediately drove into his pit box for rain tires.

As wet conditions began to dry throughout Toronto's Exhibition Place, SFHR elected to keep Newgarden out on rain tires, gaining time on cars that chose to go to pit lane. The alternate strategy looked promising until a five-car incident in the final minutes of the race resulted in a red flag. Newgarden, who was fifth on the final restart, could not find the same speed as the drivers around him on Firestone red (alternate) tires.

"There were three different moments where we just needed circumstances to shake out for us and they didn't work out," Newgarden said. "The red flag at the end really put the nail in the coffin. Without the red I think we would have still been okay, but that pretty much finished us off. It was an unfortunate weekend for all of our guys."

The Verizon IndyCar Series will be back on track for the Honda Indy 200 at Mid-Ohio Sports Car Course on August 3. The team will test on Mid-Ohio's road course Thursday, July 24.