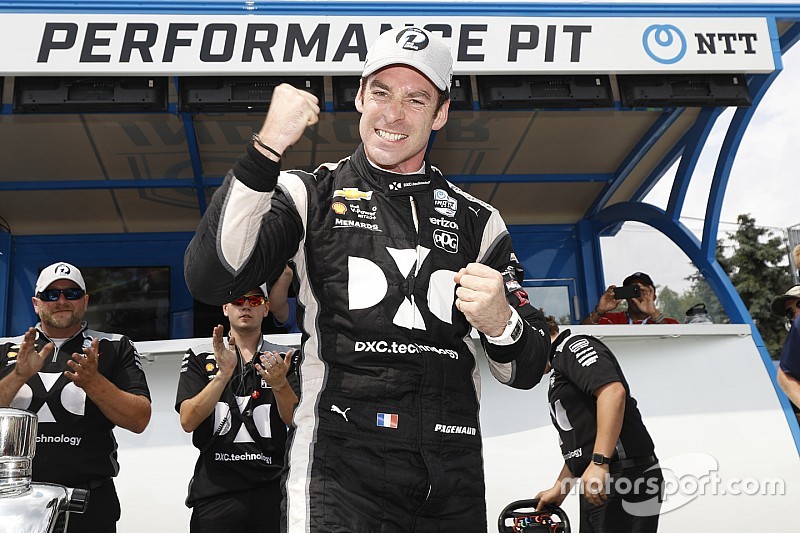 Reigning Indy 500 winner Simon Pagenaud did exactly as he threatened to do over the past two practice sessions, nailing pole position for Team Penske-Chevrolet, as rivals Scott Dixon, Alexander Rossi and Josef Newgarden spun and/or brushed walls.

Pagenaud nailed a 58.4293sec lap – an average of 110.041mph around the 1.786-mile street course to beat Dixon by 0.1655sec as Chip Ganassi Racing-Honda’s reigning champion and defending Toronto winner spun at the start of what would have been his final flyer.

Dixon’s teammate, rookie Felix Rosenqvist, was a mere 0.0845sec short of nailing P2, Rossi was furious with himself for brushing a wall at Turn 6 on his final run and finishing the session only fourth.

He nonetheless starts ahead of championship leader Josef Newgarden who fell 0.88sec short of his Penske teammate Pagenaud before smacking the wall out of the exit of Turn 11 and bending a right-rear toelink. He will start on the third row beside the session’s biggest positive surprise, Ed Jones in the Ed Carpenter Racing-Chevy.

The disappointment for the local crowd was that James Hinchcliffe was consigned to the seventh row of the grid having failed by 0.04sec to make the top six in Q1 Group 2, although it was impressive that he managed to outpace Colton Herta’s Harding Steinbrenner-Honda.

But the most surprising elimination at Q1 stage was 56-time IndyCar polesitter Will Power who had taken over Penske teammate Pagenaud’s softer setup for the bumpy track but was 0.8sec off Rosenqvist’s pacesetting time in that session. He reported to NBC Sports Network that he had also suffered gearshift issues, but that the main problem was setup. It’s the first time Power has missed the top dozen on a road/street course in over four years.

Marcus Ericsson in the second Arrow Schmidt Peterson Motorsports-Honda, who had also suffered a nightmarish Friday morning session, slapped the wall while still on primary tires, sending him crabbing down the straight and out of contention.