Our number 4 top moment of 2013 was the moment that Dario Franchitti was launched into the catch fencing in Houston, and his subsequent retirement.

In a year that saw the motorsport community lose a lot of friends, Dario Franchitti is counting his lucky stars that his accident at Houston was not worse.

Franchitti is a four-time IndyCar champion, and has three Indy 500 wins to his credit along with a grand total of 31 wins in American open wheel racing, but announced his retirement from the sport one month after a nearly tragic accident at the second of two Houston races on October 6.

In the closing laps of the event, Franchitti ran up on the sliding car of Takuma Sato. He attempted to move to the outside of the Japanese driver through a sweeping turn 5 on the temporary street course, when his front wheel touched Sato’s.

This sent Franchitti airborne into the catch fencing at very high speed, destroying his car, sending bits and pieces into the stands injuring 13 fans and ultimately Franchitti himself. 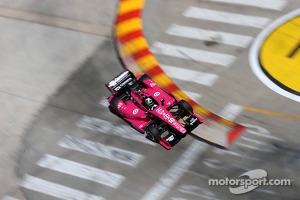 The Scottish driver suffered a spinal fracture, right ankle fracture and a concussion. The driver underwent the necessary operations to correct the injuries soon after the wreck, but was given terrible news by his doctors.

Having suffered serious accidents and concussions a couple times in his career already, his doctors told him that they felt he should get out of the cockpit, as one more accident could be much more serious.

“I'll forever look back on my time racing in CART and the IndyCar Series with fond memories and the relationships I've forged in the sport will last a lifetime,” said Franchitti.

“Hopefully in time, I'll be able to continue in some off-track capacity with the IndyCar Series. I love open-wheel racing and I want to see it succeed. I'll be working with Chip to see how I can stay involved with the team, and with all the amazing friends I've made over the years at Target. As my buddy Greg Moore would say, ‘See you up front’”