The paradigm has shifted: IndyCar is a street course series

With much of the IndyCar schedule looking like a street course series, will we see more in the future. Mark Wilkinson discusses where the money is for IndyCar

Hoosier humorist Kin Hubbard once wrote, “T’aint what a man don’t know that hurts him. It’s what he knows that just ain’t so.” I have no authority or research to show that he was a fan of racing, but the blindness to reality of many IndyCar fans is summed up in that aphorism. IndyCar has changed…forever. The time has come to accept that truth.

That’s not to say that change is bad, but it is certainly inevitable. The fact is that IndyCar, in its current incarnation, is a street course series, and that is not going to change anytime soon. On the current 18 race Verizon IndyCar Series schedule, eight of the races are street courses. This number is likely to increase domestically in coming years. And it’s a simple reality why this is true: it’s more value for everyone.

Before any of my tens of readers respond with Tony George, IRL, IMS, or spec racing rants, let me offer a piece of advice: shut up. The war is over. You lost. And keep in mind that I am a true aficionado of all things oval. As an oval fan, my choices were to quit caring about IndyCar, which will never happen, or embrace the great racing going on in front of me. I choose to embrace.

We are a festival society. We love to go to metropolitan downtown areas and party. Cities have Irish, Italian, and German fests. Giant art fairs take place around the country. We celebrate beer, brats, and ribs. Music festivals draw huge crowds. Racing and speed are just other things to celebrate. Most cities have vast experience hosting these spring, summer, and fall festivals. They bring people downtown after business hours. Cities want in. And it is in IndyCar’s best interest to get in. 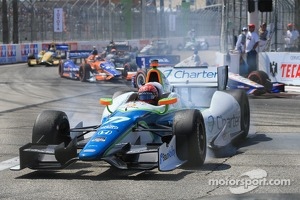 The fans that IndyCar needs to court do not care about CART or the IRL. They do not care about spec cars or Tony George. They do not care about horsepower or aerodynamics. They care about getting entertainment value for their dollar. Currently, the Verizon IndyCar Series is the ONLY racing series making a concerted effort to bring racing to where the people are, in revitalized or revitalizing downtowns. The series OWNS this. No one does it better, or for less investment, than IndyCar. The suggested F1 foray into Long Beach will fail simply because of the vast infrastructure investment required. IndyCar will race on the course that is there. That’s value.

Street courses have proven to be good business. Look at what Roger Penske has done in Detroit, a failing city with a successful race. Penske made it successful by courting business as his primary way of generating revenue. The Chevrolet Indy Dual in Detroit actually removed seating to add the much more valuable chalets for business customers. This business-to-business model works very well in city centers with easy access to hotels, dining, bars, and the racing itself.

Street courses offer the regular fans something not offered on most ovals: on-track action throughout the day(s). The entire Road to Indy support series can be put in front of spectators, not to mention their sponsors. Add in the Pirelli World Challenge sports cars and Robby Gordon’s Stadium Trucks and you have action and value for the fans and the sponsors. THIS builds the series, not the constant rehashing of past politics and the self-scourging by fans longing for an oval or CART based salvation.

Accept it. The future of IndyCar is going to include a majority of street courses because that is where the money and the people are. And by happy chance, the racing is great. William Shakespeare said, “What’s past is prologue,” and he’s right. All the history, politics, bravery, greed, and stupidity have brought us here to this moment. Embrace the street race!

IndyCar to stream practice activity for remainder of season

Sibling rivalry: the plight of the GP of Indianapolis