The Mayor of Hinchtown ruled in Speedway today 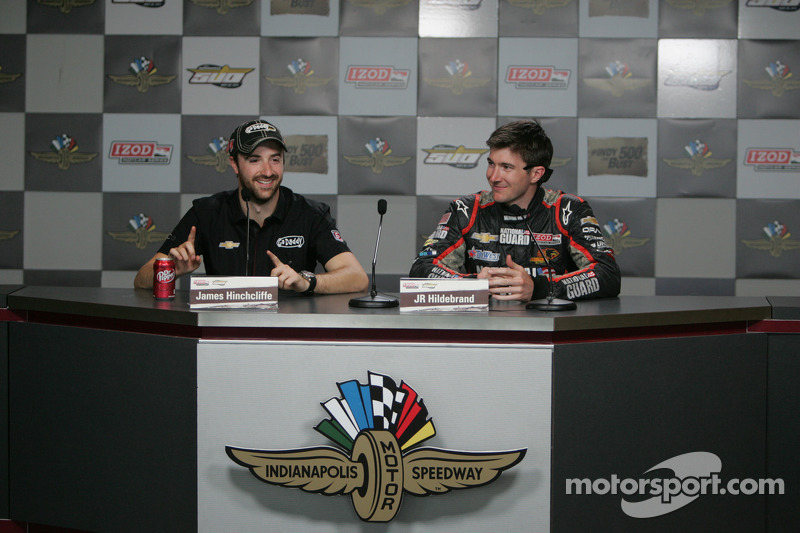 It was James Hinchcliffe's turn today at Andretti Autosport to set quick time at Indianapolis on a warm and blustery day where wind gusts out of the southwest of up to 23 mph made any earnest attempts at speed seemed ill advised. In his rookie year The Mayor of Hinchtown hit the wall in Turn 3 but has rarely put a wheel wrong at Indianapolis since then, starting on the front row last year. We could see an all-Andretti front row this year, something only Roger Penske's team has been able to do in the past. Due to the windy conditions, most teams settled on lapping in groups to find a race pace with the influence of turbulence caused by traffic. It was not unusual to see eight or nine cars running together today so everyone should have a pretty good idea how their cars will behave if race day is hot and windy.

Oriol Servia gets relief from the sun in the pits

As so often happens at Indy, practice week starts off cool and the temperatures rise throughout the month. Today was the first day where teams were using umbrellas to shade the drivers waiting in pit lane for adjustments to be made, so the heat is on. But there's an old saying in Indiana that "if you don't like the weather, then wait five minutes and it will change." This is usually true in the spring but not so far this month of May. Four consecutive dry days have enabled the teams to run a tremendous number of laps at the Speedway. The groove was really black in Turn 3 this afternoon after 2226 laps were run today. Teams ran 1733 laps yesterday so barring a significant rain event, more of the same can be expected the rest of this week leading up to Pole Day on Saturday. At some point soon, teams with a desire to win the pole, or at least get into the Fast Nine session at the end of Pole Day, will have to start making single car runs and peeling downforce off the cars. 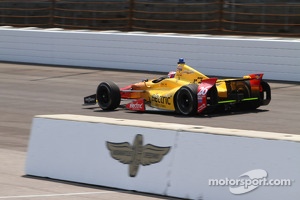 While Andretti's drivers take turns putting on a show and setting fast times, they are not doing the most work so far other than rookie Carlos Munoz who ran 172 laps on Monday. Marco Andretti ran 117 laps with his fast lap of 225.001 on Monday, followed by Ryan Hunter-Reay with 108 laps, Hinchcliffe 92, and EJ Viso a dawdling 85. In the process, Andretti drivers took five of the top 11 places on the speed chart Monday. The story is much the same today but with a twist: Hinch ran only 26 laps today to set his fast time and Andretti's team cars occupied five of the top eight spots on speed today. Not only could Andretti drivers sweep the front row, they could essentially blockade the Fast Nine which would come as quite a shock to the Penske and Ganassi teams. I've never been a big Andretti fan but I really enjoy Hinchcliffe's antics and he has had some big shoes to fill, taking the seat which was intended for the late Dan Wheldon and doing great things on the track with race wins and off the track for sponsor GoDaddy with memorable promotions.

The need for speed is satisfied at Indy

I will be a short timer at IMS again tomorrow afternoon but it's amazing how much one can shoot in only a couple of hours at the Speedway. The facility is so large that it's almost impossible to try to cover the whole racetrack in one day, so I have been going out with specific objectives in mind the last two afternoons once my teaching duties were fulfilled. I always try to chase the favorable lighting and today I went for some speed shots to try something a little different. Some photogs would call this artsy-fartsy but there's only so many ways to shoot these cars without them looking like they are parked on the track. At any rate, I had fun again today and I have resisted the urge to wear earplugs so I can absorb the sweet scream of the Honda and Chevy turbos. I even recorded some digital sound on my handheld voice recorder too so I can have a listen next winter when the racing doldrums kick in. Call me crazy if you want but I don't care as long as you call me when it's time to go racing.

I'm lucky because I get to do it all over again tomorrow.