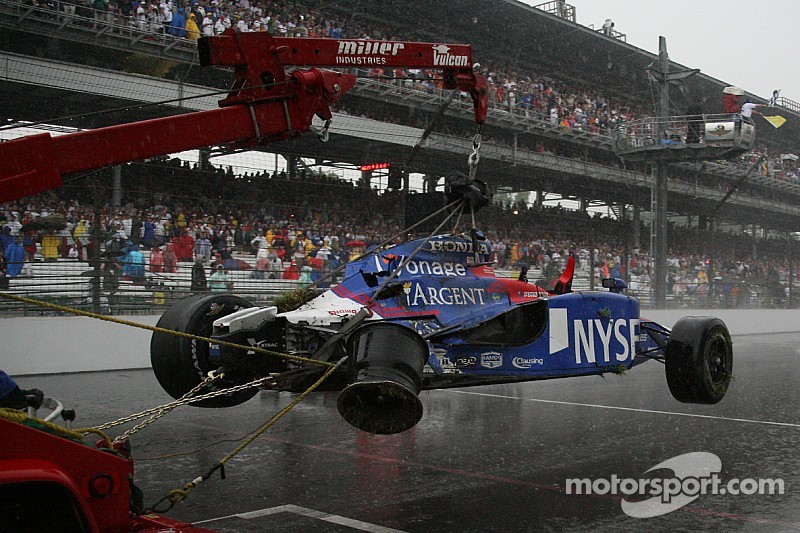 Three generations of the Andretti family have attempted to win at Indy and since 1965, they've only emerged victorious once, and that was 45 years ago.

Five members of the Andretti family have taken part in the Indianapolis 500. Combined, they've had nearly 70 chances to win 'The Greatest Spectacle in Racing.' They've only won it once however (1969 with Mario Andretti). The reason why they haven't dominated at the Brickyard while they conquered most other races around the globe is debated.

Some call it bad luck, some blame Andy Granatelli's now infamous kiss, others believe it's the toll they must pay for the success they've enjoyed elsewhere. A few call it fate. Most consider it a curse.

And so it begins

When Mario attempted to defend his Indy 500 title in 1970, he qualified eighth and many felt that was a bad omen. Between 1911 and 1984, no driver had ever won the race from that position on the grid. He never recovered from an unscheduled pit stop early in the event.

Mario would finish second to Bobby Unser in '81, but after Bobby was penalized for passing cars under yellow flag conditions, Andretti was named the victor. He was the winner of the 1981 Indianapolis 500 for 138 days. In October, nearly five months after the race had concluded, an appeal by Roger Penske was successful and Unser was granted the victory back.

Mario continues to be plagued by issues

The very next year, Mario never even made it to the start/finish line to commence lap one. Second place starter Kevin Cogan curiously lost control, spun across the track, and directly into the path of Andretti's machine. He would exit the race due a crash the following year as well.

The 1984 edition of the 500 saw Mario run strong the entire day until a broken exhaust pipe forced him to make an unscheduled pit stop. To add insult to injury, while entering the pit lane, Josele Garza crossed in front of him and the two collided, ending Mario's day. This was also the Indy 500 debut for his son Michael, who finished a strong fifth.

He placed second once again in 1985, losing to Danny Sullivan after the famous 'spin and win' incident. In 1987, no one could touch Mario Andretti. He dominated everything in the month of May. As the race entered the closing laps, he backed off and saved what he had due to the near-insurmountable lead he held over the field. Some say that decision contributed or may have actually directly caused his car to suffer a broken valve spring with just 20 laps left.

Mechanical issues continued to haunt Mario Andretti throughout the late 80's while his son Michael ran strong, albeit victory lane alluded him too. In 1989, Michael was leading with 37 laps to go when he suffered an engine failure. In 1990, his brother Jeff failed to make the race in his first Indy 500 attempt. Michael then finished runner-up to Rick Mears in 1991.

1992 is probably the most infamous year of them all. On a restart, Mario was involved in a heavy crash that caused him to break several toes. While at the hospital, he heard the doctors shouting and rushing in another driver. It was his son, Jeff Andretti. Jeff shattered both legs in a vicious wreck, some 30 laps after his father had exited the race.

Michael Andretti was motivated to win for his family and it seemed like nothing could stop his valiant charge. His performance was near-impeccable but with less than 28 miles (11 laps) left in the race, his engine expired. How much crueler can fate be?

In 1995, Michael held a comfortable lead on the 77th lap before traffic forced him into the wall. It was a fairly gentle contact, but his suspension was damaged and the car could not continue. Michael was leading in 2001 when rain halted the race just past the halfway point. They could have called it, but they waited it out instead. When the race resumed, a multitude of issues ruined Michael's run and he was not a factor at the end of the day.

The Brickyard takes one last shot at Mario

Mario Andretti came out of retirement and drove an Indy car for the first time in nine years for the injured Tony Kanaan in 2003. At 63 years old, he was fairly impressive but with just two minutes left in the practice session, disaster struck. Kenny Brack had an incident and after running over some debris that damaged the front of his car, Mario's car was sent hurdling into the air and almost completely over the fence. It was a horrific accident that Mario somehow walked away from, but it could have just as easily claimed his life.

The curse moves on to the third generation

With Mario's career over and Michael's nearing the end, it became the incumbent of third generation racer Marco to take on Indianapolis and end the family's so-called curse. In his debut, Marco made his presence known and put himself into the lead with just one lap remaining. The commentators said it was over; that there was no way anyone could catch him. His father ran third, but watched helplessly as the victory was snatched from Marco's hands by mere feet at the finish line, courtesy of Sam Hornish Jr.

Since that fateful day in 2006, Marco has had seven more chances at Indianapolis 500 glory, failing each time. He's flipped over, led the most laps, placed third on three occasions, but has yet to taste the milk.

We'll have to wait and see if fate finally favors them in 2015 or if it will be just another case of 'what could have been' for the Andretti family.

Bourdais: "Did anyone really believe this was safe?"

Making it as a single-car team in IndyCar