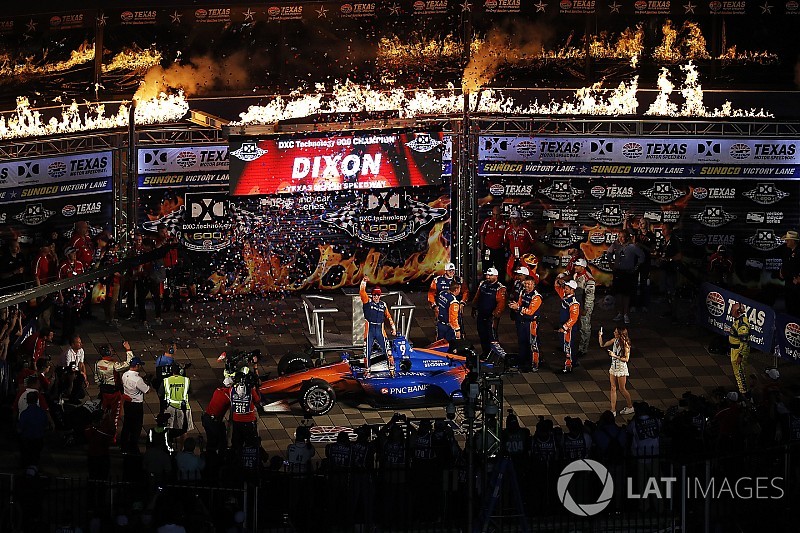 Scott Dixon took his 43rd IndyCar career victory to move past Michael Andretti in the all-time winner list at Texas Motor Speedway, and moving into the points lead as Will Power was eliminated in a collision.

Their attempts were stalled by a full-course caution for the other Foyt car, that of Matheus Leist, which caught fire dramatically, obliging the Brazilian teenager to rapidly exit the cockpit at Turn 3. Behind this top six ran Dixon (Chip Ganassi Racing-Honda), Ryan Hunter-Reay (Andretti), Sebastien Bourdais who had fallen from fifth, and Takuma Sato in the Rahal Letterman Lanigan Racing-Honda in 10th.

On Lap 14 restart, Pagenaud tried to go around the outside of Newgarden, lost momentum and had to cede second to Power. Six laps later, Dixon moved past Kanaan for sixth after a strong run out of Turn 2, and Zach Veach’s Andretti car moved past Sato, and he’d soon get around Bourdais to move onto the tail of teammate Hunter-Reay.

Nearer the front, Rossi went around the outside of Wickens to grab fourth on Lap 24.

Foyt’s night got still worse as Kanaan pitted on Lap 27, complaining of a right-rear issue – possibly suspension, as he had brushed the Turn 2 wall.

At the front, Newgarden was holding around a 1sec lead over Power, who was running just three-tenths ahead of Pagenaud whose mirrors were full of Rossi’s car.

Pagenaud and Rossi got around Power on Laps 43 and 44 respectively. Just a little further back, as the lower members of the top 10 encountered a backmarker, Veach found a brave way through to vault up to sixth.

Bourdais was the first of the top 10 runners to stop, on Lap 55, and he started running 217mph laps – 6mph faster than the leaders. That brought Newgarden in leaving Pagenaud, Rossi and Wickens running in the top three, the latter having just gotten around Power who was struggling with a lack of front end bite.

Pagenaud and Power pitted on Lap 63, with Dixon stopping two laps later, and Rossi at the end of 67. The pit delta was far bigger this year, as the 60mph pitlane speed limit was enforced on the warm-up lane all around to the back straight.

Following the round of pitstops, Pagenaud took the lead by 2.5sec over Newgarden with Power a further 1.6sec back with Wickens 3sec behind chased by Dixon, Rossi, Hunter-Reay, Bourdais, Sato and Marco Andretti. Veach had been shuffled back to 11th.

Wickens soared up onto Power’s tail, going around 5mph faster, as all three Penskes appeared committed to either nursing the tires or saving fuel. He passed him down the front straight to take third and then got around Newgarden.

On lap 95, Wickens hit the front around the outside of Pagenaud and a few laps later there were further issues for Penske as Newgarden had to pit early with front right tire blisters, and Power lost two places to Dixon and Rossi and fell to fifth.

On his new tires, Newgarden started slicing up the field but now two laps down, while Dixon and Rossi got around a faltering Pagenaud on Lap 114 as the 2016 champ was being careful with blistered right-front tires. He stopped on Lap 119, and Power did likewise, and Dixon came in a couple laps later.

Wickens and Rossi, by contrast, were able to go to Laps 126 and 127 before stopping and although they lost the lead to Dixon, they were now well ahead of Pagenaud and Power who’d dropped to sixth and eighth thanks to the Penske’s heavily reduced pace at the end of the previous stint.

With 140 of the 248 laps completed, Dixon led Rossi who had just passed Wickens for second as the Canadian got stuck behind a backmarker, while Newgarden had to drop out of fourth for his third stop having felt more blisters building up.

On Lap 154, Dixon’s lead was 10sec over Rossi and Wickens, chased by Bourdais, Pagenaud, Hinchcliffe, Hunter-Reay, Sato, Power and Rahal. Sato stopped on Lap 156, leaving only eight cars on the lead lap. That became seven cars on Lap 166 as Bourdais pitted, and as he rejoined he got in the way of Pagenaud, allowing Hinchcliffe to move into fourth.

SPM’s night turned sour almost simultaneously, however. Wickens had dived into the gap between Ed Carpenter’s car and the white line that defines the apron. It unsettled the Schmidt car, and the tail swung out and collected the ECR-Chevy, the pair of them heading backward up the track and into the wall. Carpenter fully admitted he was at fault for pinching Wickens down.

Dixon, Rossi, Hinchcliffe, Pagenaud and Hunter-Reay – the only drivers left on the lead lap – all stopped, and it was just as well for Rossi because the refueler struggled to get the fuel onboard and he fell to the back of this cluster. However, Hunter-Reay then stopped again with all the lapped runners, allowing Rossi back up to fourth.

Power, Rahal, Zachary Claman De Melo and Ed Jones were back on the lead lap, but they didn’t make any progress on the restart – not compared with Pagenaud who passed Hinchcliffe for second and Hunter-Reay who went around teammate Rossi.

On lap 194, Hunter-Reay passed Hinchcliffe around the outside into Turn 1 to move into third, and it was Rossi’s turn to move onto Hinchcliffe’s, and Rossi managed to pass both the SPM car and Hunter-Reay in one maneuver down the front straight on Lap 198. In the meantime, Veach and Jones were notified they’d be given a drive-through penalty for jumping the restart.

Out came the yellow again on Lap 205. Power had moved onto the tail of Hunter-Reay but moved up the track in his wake – precisely where Claman De Melo had placed his Dale Coyne Racing-Honda having had just rocketed past Rahal. Power’s Penske collided with the Coyne car, and the pair were out on the spot. Power will be issued a post-race penalty.

The frontrunners took the opportunity to make their theoretical final stops, Dixon, Pagenaud, Rossi, Hinchcliffe, Hunter-Reay and Rahal emerging in that order.

The restart saw Pagenaud try to threaten Dixon, but it didn’t work and he soon fell off the tail of the leader, and had to defend from Rossi. In the mean time, Newgarden was served a drive-through penalty for jumping the restart. He would finish 14th, four laps down.

Rossi twice drew alongside Pagenaud on the outside of the Penske driver along the front straight but couldn’t make the move stick at Turn 1. Pagenaud’s defense was faultless, trying to break the tow and moving down to the inside line, forcing Rossi to test the outside line. The Andretti driver never made it past.

Dixon let his lead dwindle over the closing laps behind backmarkers, but still won by 4.3sec over Pagenaud who scored his first podium finish of the year.

Dixon on Texas win: “It's not often you get a runaway in this series”