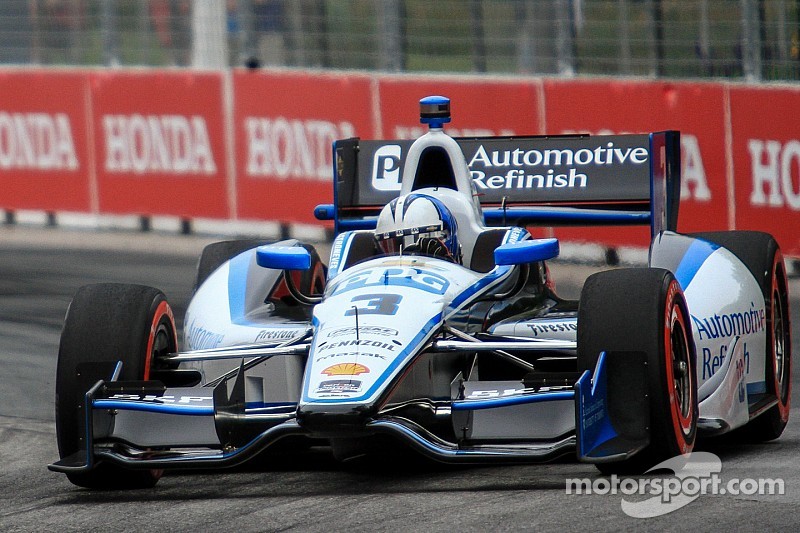 Helio Castroneves: "We leave with a little larger lead in the points and that is something to be proud of after a crazy weekend with the weather.”

·    Rains showers in the Toronto area on Saturday forced INDYCAR officials to postpone Race 1 of the “2 in T.O.” until Sunday morning, creating a true doubleheader with two races being run on the same day.

·    Juan Pablo Montoya qualified his No. 2 Hawk Performance Chevrolet in the 11th position during the Saturday morning qualifying session. However, he was forced to start at the rear of the field for the first race – a 65-lap event – of the Honda Indy Toronto doubleheader as the team had to replace many of the electrical units in the No. 2 Team Penske car while INDYCAR attempted to start the race on Saturday afternoon.

·    The start of the race featured a red-flag period for a multi-car incident on lap one. When the red flag was lifted, Montoya brought his Hawk Performance Chevy down pit road for a fuel-only pit stop to alter the team’s fuel strategy.

·    Montoya valiantly tried to move up through the field – making his way as high as the 14th position – but the handling of the No. 2 Chevy deteriorated and he was forced to give up several spots in the waning laps to finish in the 18th position in the first race of the doubleheader.

·    With the field for the second race set by Verizon IndyCar Series entrant points per the 2014  INDYCAR rulebook, Montoya began the standing start from the fifth position.

·    Montoya started the race on the “red” tires but a light sprinkling of rain fell over the course in the early laps. While attempting to make his way onto pit lane for Firestone rain tires, Montoya slid into the tire barrier in Turn 8. In addition, the No. 27 car driven by James Hinchcliffe made contact with Montoya’s Hawk Performance Chevy and the No. 7 car driven by Mikhail Aleshin slid and became lodged underneath the No. 2 car after also losing handling on the wet surface.

·    After the safety team dislodged the cars, the resulting damage to the front and rear wings were quickly repaired by the No. 2 Team Penske crew. Unfortunately, Montoya lost four laps to the leaders in the process.

·    Montoya turned some of the fastest laps on the track over the closing stages of the second event – which was changed to a timed race instead of 65 laps - but he could not make up all of the lost laps and crossed the finish line in the 19th position.

·    With the two finishes on Sunday, Montoya remained fifth in the championship standings, but he now trails Team Penske teammate Helio Castroneves by 105 points.

How was the hawk performance Chevy in the first race in Toronto?  “We made a little bit of a mistake staying on red tires and the tires just really fell off. When you're competing there's nothing you can do but just get out of the way. But we looked forward to Race #2 and went for it in the Hawk Chevrolet."

What happened in the incident when it started to rain in the second race? "We stayed out on the reds (tires) just a bit too long. We were actually trying to come in for wets (tires) on that lap. From there it just went from bad to worse. Starting in the back in such short races makes it almost impossible to get anything! It felt okay on the red tires, and started braking okay, then when I got to the concrete, it just went straight. It was really wet by then and they couldn't turn either. The Hawk Performance Chevy, I thought, was really fast this weekend when we unloaded, but the rain kind of got us off our game.”

·    Helio Castroneves qualified the No. 3 PPG Automotive Refinish Chevrolet in the third position for Sunday’s rescheduled first race of the Honda Indy Toronto. He moved up to start in the second spot after teammate Will Power was moved to the back of the field when the team worked on the car during Saturday’s red flag period.

·    After falling back to the third position early in the event, Castroneves was able to keep pace with the second-place car of Ryan Hunter-Reay. Castroneves eventually took back the position as the race moved past the halfway point.

·    Castroneves was happy with the handling of the No. 3 PPG Chevy throughout the first race as he called for no chassis adjustments on the team’s only pit stop at lap 35.

·    While he was slightly faster than the eventual race winner, Sebastien Bourdais, the ground Castroneves needed to make up was too much as he crossed the finish line in the second position. However, the finish allowed Castroneves to break a third-place tie with Michael Andretti for the most top-two finishes in series history as he now has 35 runner-up results.

·    As the leader in the Verizon IndyCar Series entrant points standings, Castroneves began the second race from the top spot in the PPG Chevy.

·    Like his Team Penske teammates, Castroneves began the race on the “red” alternate Firestone tires. He was able to take control of the race early, even when the skies began to open and produce light rain.

·    Race strategist Roger Penske brought Castroneves down pit road for rain tires under a lap 12 caution period. After restarting from the third position, behind cars still on racing slicks, Castroneves was able to easily reclaim the lead again at lap 21.

·    Castroneves continued to pace the field until surrendering the lead to Team Penske teammate, Will Power, at lap 42.

·    As the rain stopped and the track dried, Castroneves made his final pit stop on lap 45 for fuel and “red” tires.

·    Castroneves restarted in the eighth position as he lost some ground to drivers that made their pit stops earlier and stayed on the track. While running back in the pack the PPG Chevy was involved in an incident with several other cars, but Castroneves was able to continue with minor damage to the No. 3 machine.

·    The front wing damage did produce an understeer condition that forced him to drop several more positions before the checkered flag flew with him running in the 12th position.

·    Castroneves led a race-high 32 laps in the second race and led 33 laps overall on the weekend.

·    With his finishes of second and 12th in the Honda Indy Toronto, Castroneves now leads Power by 13 points in the Verizon IndyCar Series championship standings.

How much more did you need to catch Sebastian Bourdais in race one? “Yeah, first congratulations to Sebastien and KV Racing.  When (Sebastian) Saavedra came between us I knew it was a little bit of a game there. This place, because it’s so narrow in the straightaways and even in the corners, what happens is the air is affecting you. Even if a guy is starting five cars away from you, six cars away, it’s still affecting you – especially near the end of a stint when the tires are old. So I started sliding around, and I said that you have to know sometimes when to take one step back so that we can move forward to the next race, and that is what we did.”

A very tough race two with the changing conditions, but you must be happy to leave Toronto with a larger points lead? “When the race started in the dry the PPG Chevy was on rails. Roger (Penske, team strategist) made a great call when the rain started to come in to switch to wet tires. We were still good in the wet, but we made a small mistake and that gave Will all he needed to make the pass. We were able to stay right behind him until it dried out enough to switch back to slicks, but by that time we were already on a bit of a different strategy than some other guys. When we were back in the pack we just got caught up in someone’s mistake and that damaged the front wing pretty severely. After that it was a handful and had a big understeer. But we leave with a little larger lead in the points and that is something to be proud of after a crazy weekend with the weather.”

·    Will Power qualified his No. 12 Verizon Chevy in the second position on Saturday morning. Unfortunately he was forced to start the first race from the rear of the field after being involved in an incident while the field was attempting to take the green flag on Saturday afternoon. The incident caused damage to the left-side suspension that required significant repair.

·    The race began with Power on the “black” primary Firestone tires. He was able to make them work to his advantage as he began to make his way toward the top 10 over the first 20 laps of the race.

·    Power was able to make his way inside the top 10 at lap 41. Following some spirited racing with the No. 19 car driven by Justin Wilson, he was able to cross the finish line in the ninth position. The finish represented a gain of 14 positions over the course of the 65-lap race.

·    By virtue of his second-place position in the Verizon IndyCar Series point standings, Power took the green flag for the second race of the Toronto doubleheader from the second spot as the field was set by the INDYCAR rulebook.

·    Power made his way around teammate Helio Castroneves to take the race lead at lap 42.

·    When it became clear that the track was dry enough to make the switch back to racing slicks, Cindric called his driver down pit road for four Firestone “red” tires and fuel on lap 45.

·    While restarting the race from the sixth position due to a loss of track position to drivers that had elected to stop earlier, Power drove hard over the final laps of the 80-minute, timed race to score a podium finish of third place in the second race of the doubleheader.

·    With the result, Power now trails Castroneves by 13 points in the Verizon IndyCar Series standings as the series takes a weekend off before the Honda Indy 200 at Mid-Ohio on August 3.

What is your mindset when you have to run two races in one day? “Running a true doubleheader in the Verizon IndyCar Series can be extremely taxing because these cars are very physical. You definitely have to make sure you take the proper nutrition and hydration. We started in the back of the pack for the first race and it was a chore to get the No. 12 Verizon Chevy up into the top 10. But I knew we had a good car and that helps tremendously. The changing weather conditions was another variable that we had to deal with and that makes it even tougher, mentally.”

How difficult was it to have track and weather conditions changing so much in the second race? “When you have conditions like we had in the second race, it really all comes down to who decides to switch their tires. I think we just waited a bit too long there. Tony (Kanaan) was very good on the half-wet track and I just wasn’t willing after yesterday to take a big risk and get caught out again.  So I still had to battle hard with Charlie (Kimball) all over me. It was a good day for the No. 12 Verizon Chevy team, a typical IndyCar race where they throw everything at you. You just have to survive, and that is what we did.”