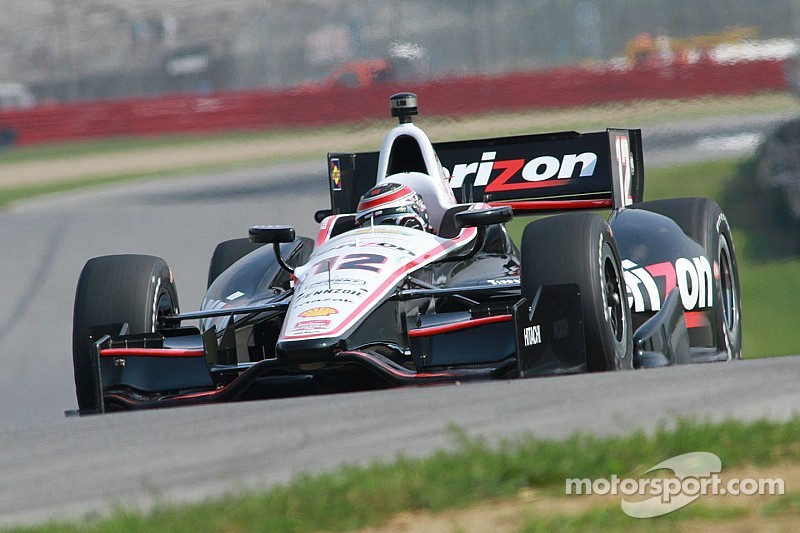 Helio Castroneves was not able to hold the series championship lead and he now trails teammate Will Power by four points in the Verizon IndyCar Series standings.

• On the first lap of Sunday’s race, Montoya suffered damage to the front wing of his car after Tony Kanaan and Marco Andretti were involved in an incident just in front of his No. 2 Hawk Performance Chevrolet. After visiting pit road for a new front wing and fuel, Montoya restarted the race from the 16th position on lap five

• As the race settled into a green-flag run, Montoya radioed to his team that he was dealing with an understeer condition around the twisting Mid-Ohio circuit. Race strategist Jon Bouslog called his driver to pit road at lap 21 for four Firestone “red” alternate tires, fuel and an adjustment to the front wing to help the handling of the Hawk Performance Chevrolet.

• With the car’s performance improved, Montoya began turning some of the fastest laps on the track as he made his way into the top 10 in the running order at lap 26.

• Montoya made his final pit stop of the day at lap 64, pitting from the 10th position. The No. 2 Team Penske crew again applied red tires and filled the Chevy with fuel for a run to the checkered flag.

• After remaining in the top 10 until the penultimate lap, Montoya was unable to hold on to the 10th position on the final lap as he crossed the finish line in the 11th position.

• With his 11th-place finish on Sunday, Montoya remained fifth in the Verizon IndyCar Series championship standings. He now trails Team Penske teammate Will Power by 101 points heading into the final three races of the season.

Did the incident on the first lap put you in too much of a hole today? “The No. 2 Hawk Performance Chevy had really good pace. Unfortunately, we got into that incident on the first lap and broke the front wing. We lost a few spots coming down pit road for repairs, but I wasn’t too concerned about that. We were ahead of (race winner Scott) Dixon and driving away from him, so we had a really good car. I don’t think we were an 11th-place car at all, so it’s disappointing when you don’t finish where you should. We just had to alter our strategy too much after pitting so early for a new front wing. It turned into more of a fuel mileage race for us and that meant we couldn’t really push the car on the red tires. It’s unfortunate but we will regroup and go to Milwaukee.”

• Helio Castroneves qualified the No. 3 Hitachi Chevrolet in the 15th position on a wet Mid-Ohio Sports Car Course after rain showers moved through the area on Saturday afternoon.

• The race began auspiciously for Castroneves as he discovered a slightly stuck throttle on the No. 3 Chevy during the opening parade laps.

• Rather than risk having the issue worsen, Castroneves brought his car to pit road just before the green flag was displayed. He fell five laps down to the field on pit road as the issue was diagnosed and fixed.

• Upon returning to the track, Castroneves routinely turned the fastest laps on the track as he tried to make his way back up the scoring sheet.

• After a lap 40 caution period that allowed him to make up one of his lost laps, Castroneves radioed that he was suffering from an understeer condition, which was exacerbated when running behind other competitors. Race strategist Roger Penske called for four Firestone “red” alternate tires, fuel and a front wing adjustment to the Hitachi Chevy during a pit stop on lap 40.

• Showing championship determination, Castroneves turned the fastest lap of the race – 1:06:8399 seconds – on lap 67. However, he was unable to make up any more of his lost laps and crossed the finish line in the 19th position, four laps down to race winner Scott Dixon.

• With his 19th place finish at Mid-Ohio, Castroneves was not able to hold the series championship lead and he now trails teammate Will Power by four points in the Verizon IndyCar Series standings.

How hard was it to focus on trying to move forward when you had the issue at the start of the race? “Man I hate it for all the guys on the No. 3 Hitachi Chevy team. At first, I thought the throttle issue was a quick fix because as soon as they started the car for ‘gentlemen, start your engines’ I knew there was something wrong. Then, during the parade laps, I noticed that it was stuck. That could be a big problem and cause a big crash. When we came back down pit road we figured out it was a bigger problem. There was just a bit of a mistake in our fuel mapping. It was a tough race, knowing that I was on a lap by myself the entire time. We will just rebound from this. We might have been knocked down but we will get back up. On to Milwaukee!”

• Will Power qualified the No. 12 Verizon Chevy in the sixth position on Saturday afternoon, marking the eighth time in 15 races this season that he has advanced to the Firestone Fast Six final round.

• On the opening lap of the race, Power lost five positions as he and several other cars went off course to avoid an accident in the middle of the race track that caused a yellow flag.

• Power quickly returned to the top 10 as the race resumed on lap five and race strategist, Tim Cindric, told his driver to push the Verizon Chevy and not worry about fuel mileage.

• Following a lap 14 pit stop for four Firestone “red” alternate tires and fuel, Power continued to make his way back toward the front of the field.

• During a caution period at lap 39, Power returned to pit lane and the No. 12 Verizon crew once again serviced the car with four red tires and fuel.

• Over the remaining laps of the 90-lap event, Power ran no lower than seventh in the running order. He made his way up to a race-high position of third place at lap 65 before making his final pit stop of the day. Power took the checkered flag in the sixth position for his 12th top-10 finish of the 2014 season.

• With the result, Power now leads Castroneves by four points in the Verizon IndyCar Series standings as the series takes a weekend off before the final three races of the year.  The final championship stretch begins with the ABC Supply Wisconsin 250 at the Milwaukee Mile on August 17.

How do you feel with the sixth-place finish today that allows you to reclaim the lead in the championship standings? “I was very proud of the Verizon Chevy boys today. We didn't quite have the pace on the red tires that we wanted, but it was as good as we could do. As far as the standings go, we have a small lead but the key from here on out is to finish ahead of the other guys week in and week out. If we can do that, we will be in good shape to challenge for the Verizon IndyCar Series Championship."