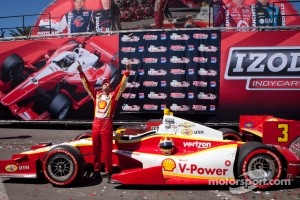 “This was a great effort for everyone,” said Castroneves, who moved into a tie for 13th place on IndyCar’s all-time list with his 26th career victory. “Chevy did a great job to keep everything under control. We had some issues in the beginning that we have to raise the revs so that we can have the battery, or something like that. But, to be honest, it didn't upset us, it makes our temperature in the engine very nice and everything went really smooth.”

“This weekend was very satisfying from the perspective that all of the Chevrolet teams worked together to prepare for this first race, and the outcome was terrific,” said Jim Campbell, Chevrolet’s North American Vice President of Performance Vehicles and Motorsports. “I’m very proud of all of the teams that were here competing. This was a terrific day for all of the teams, and for Chevrolet as we introduce the twin-turbo Indy V-6.”

The victory was Chevrolet’s first in the series since June 11, 2005 when Tomas Scheckter won at Texas Motor Speedway.

“This is a great day for Chevrolet who made the commitment to come back into IndyCar racing,” said Roger Penske. “This is really an event that shows the commitment in the automobile industry in the U.S. All the engineers within Chevrolet teaming with Ilmor to bring a product to the marketplace like this car in one year is amazing.

“It’s going to be a great season. It’s great to be back racing.”

Chevrolet will next compete in IZOD IndyCar Series next weekend at Barber Motorsports Park in Birmingham, Ala., on April 1, 2012.