Houston, TX - October 5, 2013 - Luca Filippi and his Barracuda Racing crew qualified eighth, started seventh and finished 10th in race one of The Shell and Pennzoil Grand Prix of Houston on Saturday afternoon. 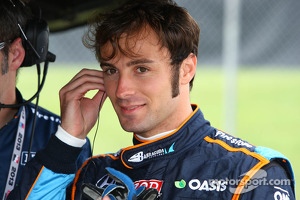 After an uneven track surface caused several revisions to the weekend's on-track schedule, teams were given a total of 50 minutes practice time before going out to qualify on Saturday morning for that afternoon's race.

Twenty-eight-year-old Filippi completed a solid qualifying run, finishing fourth in his group and being placed eight on the starting grid. An engine-change penalty given to another team advanced the No. 98 car to seventh for the start of the race.

The 90-lap competition was scheduled to begin with a standing start, which was aborted on the first try but successful on the lap two attempt. Filippi gained a spot on the first green lap, but lost a few spots as he struggled with pickup on his tires early into the opening stint.

Luca continued pushing and on lap 22, the Italian driver ran the fastest lap of the race to that point. Ten laps later, Filippi was up to fourth position and then lead lap 37.

Two-thirds of the way through the race, the Barracuda Racing team lost nearly 10 spots when the pits were closed at the start of a full-course caution. With 12 laps remaining, the team was P13. Filippi lead one final charge, passing three cars to finish in the top ten.

"The car was great to drive. Day by day we are improving. The team and I work well together and we continue to make steps in the right direction, which is the most difficult thing in any sport. I think we have to be proud about it."