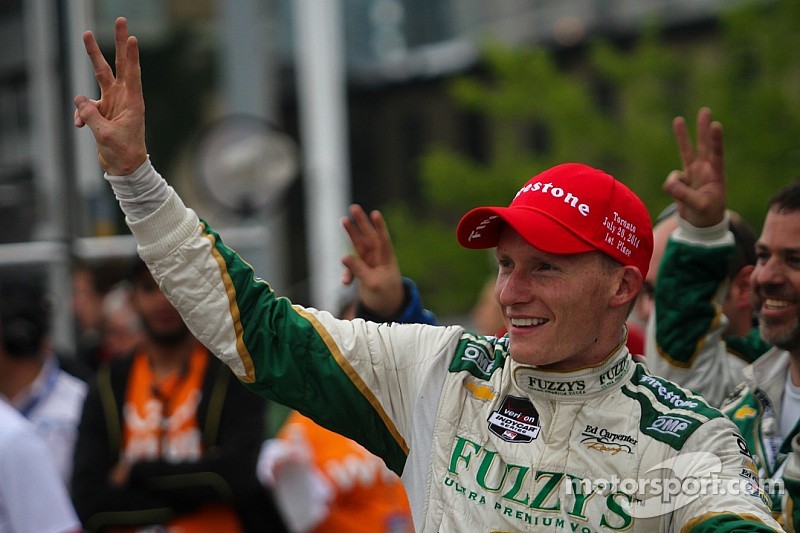 Mike Conway held off Tony Kanaan after passing Justin Wilson in the closing moments. After a plethora of full-course cautions, this already shortened race became a timed event.

It's Conway's fourth career win and second in ten starts this year. That team has won three times this season between Conway and Carpenter.

“The tire temperatures came in really fast and that’s what you need in those types of conditions so I could just control it and not have to push too hard and enjoy those last few laps,” said Conway.

“Mike said he was ready for dries. This one is all Mike; he did a great job,” said team owner/driver Ed Carpenter, who won at Texas Motor Speedway in June.

With four minutes and 32 seconds remaining, a pileup ensued back in the back. Contact sent Carlos Huertas and Ryan Briscoe spinning. Championship leader Helio Castroneves, Ryan Hunter-Reay, Carlos Munoz, and Jack Hawsworth had nowhere to go, piling into the mess.

Justin Wilson restarted second but was still on wet tires while most had moved to slicks, causing him to fall back to tenth. Helio Castroneves, who looked pose to win the race at one point, limped home in 12th with a wounded front wing.

Tony Kanaan continues to ride this wave of momentum he's on, posting his third consecutive podium result in second. Will Power finished third, cutting back into his teammate's points lead. He was closely followed by Charlie Kimball in fourth. Takuma Sato got his best finish of the season, placing fifth for A.J. Foyt's team. The top five comes on the heels of six DNF's for the Japansese racer.

Early in the race, there was a scary accident when the rain hit. Mikhail Aleshin car rammed into the pack of a stopped Montoya, digging underneath the Team Penske machine. With the car sitting on top of him, Aleshin found it hard to breathe with the heat from the car directly in his face. In a photo that you can see in the story linked below, tire marks are clearly visible on the visor of Aleshin's helmet.

13 points separate the Team Penske teammates of Helio Castroneves and Will Power after the double-header in Toronto. Ryan Hunter-Reay has moves back up into third, but is a distant 69 points back of the lead.