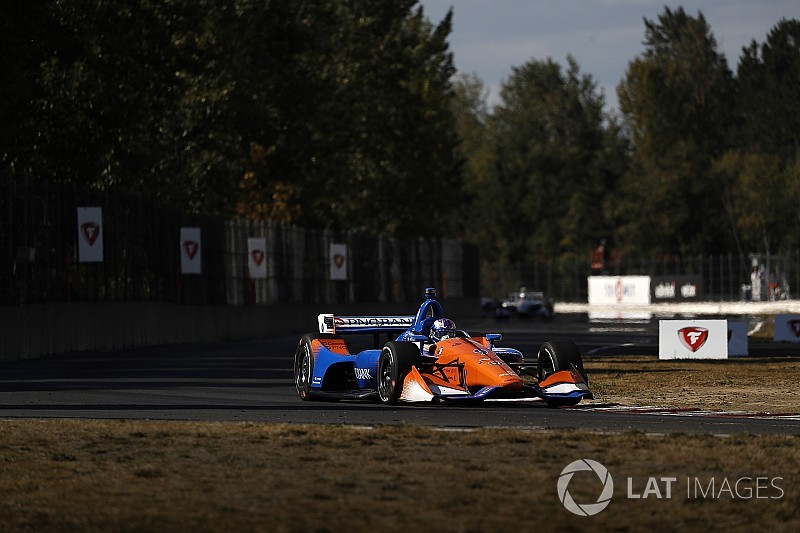 David Malsher looks ahead to IndyCar’s Grand Prix of Portland, the first time the top tier of open-wheel racing has competed at Portland International Raceway since 2007.

At last, Fernando Alonso Fever – a virulent condition that seems to strike every series whenever the master turns his soulful and doleful eyes away from Formula 1 – has been set aside in IndyCar, at least until his test at Barber Motorsports Park next week. The worry over Robert Wickens’ condition since his huge shunt at Pocono Raceway has dominated our thoughts and made silly-season speculation seem… well, silly and trivial by comparison.

Now, before Fred settles his backside in a roadcourse-kitted IndyCar, we have the penultimate stage of the 2018 Verizon IndyCar Series to settle. The two outside contenders for the crown – 2014 champ Will Power and 2017 champ Josef Newgarden – have wrapped up the front row for Team Penske-Chevrolet. Third on the grid is Alexander Rossi of Andretti Autosport Honda, who is 41 points ahead of Power (now that Will has a point for pole position) and only 26 adrift of points leader Scott Dixon – who has qualified his Chip Ganassi Racing-Honda 11th for today’s race.

At Gateway Motorsports Park last weekend, we had a dull first half of the race followed by a gripping second half that even involved one of the title challengers, Rossi, successfully carrying out a very unlikely fuel-stop strategy and vaulting into second place behind Power and ahead of more Dixon. With the Ganassi driver receiving points for leading laps and leading most laps there, Rossi actually only shaved three points from his points deficit, so yes, Dixon is still favorite for the championship – his fifth series title and third in six years.

But for now we have a four-way championship battle on our hands going into the Portland race. It’s fantastic that a returning race is so vital in the title chase yet one suspects the impressive crowd at PIR yesterday and even Friday would likely have turned up whether this race was second or second-from-last in the schedule. When Champ Car and Indy Racing League merged in 2008, this 1.964-mile road course in the northwest may not have been everyone’s first choice in the “We’re gonna miss that race” category, but the northwest of the country has clearly missed open-wheel racing.

Will the racing be good?

Asked how good the racing will be at Portland, second-placed qualifier, Team Penske-Chevrolet’s Josef Newgarden, admitted, “I'm not sure, to be honest, but I think we'll have a good race just like Mid-Ohio. People used to say about Mid-Ohio you never have a good race there. We had one of the best ones a couple of weeks back. And I wouldn't be surprised to see some side-by-side racing here.

“It does get narrow in parts of this track, then also widens. Turn 7 is a very wide corner that can create a lot of chaos. Some sections you get bottled up and that kind of mix-up can create a good race. You never know with IndyCar. You're always kind of surprised in the race to see what you get.”

Whatever else we think we know, there’s no chance of a team going for a radically different strategy in terms of number of pitstops. Rossi made one fewer stop than his rivals at both Mid-Ohio (which he won) and, as mentioned, at Gateway, where he took second, but there is no such option here – or at least, not without long and frequent caution periods. The 105-lap Grand Prix of Portland will be a three-fuel-stop race.

Rossi’s strategist and Andretti Autosport COO Rob Edwards, told Motorsport.com: “The fuel windows are wide open, and there’s no way you’ll make it on two. It’s going to come down to tire management and degradation.”

But hang on… From what we saw in testing (Thursday) and practice and qualifying (Friday and Saturday), the alternate-compound Firestones can last two laps at their peak grip, rather than the usual one, while the harder primaries may not reach their zenith until sometimes their fourth or even fifth lap. It seems degradation is not an issue.

So we’re looking at a race decided on pure speed and extracting the most speed – regardless of compound – over a full stint? Fuel saving is not a factor?

We’ll resist the temptation to insert a ‘joyful’ emoji or GIF file here.

Portland was last resurfaced soon after that 2007 Champ Car race and it has well withstood the test of time and winter ravages. This weekend it has offered far more grip than the series veterans recall from 2007.

Said Power: “[The resurfacing] made a huge difference in grip. There used to be patches in the middle of the corners – the Turn 7 corner into the backstretch. And the hairpin is a much nicer corner now. Probably promotes a little bit of passing, makes the track a little bit more technical. Those are the differences. Yeah, very fun, enjoyable track.”

Power admits his memory of the old track isn’t great. There was in fact another quite significant change at Turn 7 – the entry was widened, then the exit radius tightened, making his new track record even more impressive. In addition, the Turn 10 curbs that used to send the more aggressive corner-cutters up on two wheels, have been flattened.

I asked one of the best race engineers for peak speeds around the track (without using push-to-pass overboost). Approaching the Turn 1 triangular chicane, he said, the cars are reaching 175mph but apexing through Turn 2 at a mere 56mph. That 120mph loss helps explain some of the misjudgments we’ve seen from IndyCar drivers at Turn 1 this weekend.

Perhaps the most impressive acceleration, however, is that seen out of T2, through T3 and along the tiny straight to T4, where the cars reach 146mph before changing down and turning right at 113, further scrubbing speed down to 98 for the decreasing radius into Turn 5 and slowing still further to 78mph for the left-handed Turn 6.

There’s then a short blat up to 125 before halving that speed for the reprofiled right-handed Turn 7. Then the back ‘straight’ is in fact a very gentle left/right – officially Turns 8 and 9 – at the end of which the drivers have reached 180mph before braking and flicking down a gear or two to pitch left into Turn 10 at 135mph (where Sebastien Bourdais had his alarming shunt in third practice) and flow into right-handed T11 where several drivers in IndyCar and the various Mazda Road To Indy series came to grief in testing, practice and qualifying. Get Turn 10 wrong and, unless he can scrub off a lot of speed and fast, a driver will be wrong for T11, as he will also be if he strikes the curbs on the inside of 11 too hard. Either form of error will see an IndyCar understeer wide, just as its drivers needs to be cranking on more steering lock for right-hand Turn 12, taken at 82mph.

As is usual in IndyCar, expect the unexpected. A moment’s insanity from just one individual at that Turn 1 chicane on the opening lap could have huge repercussions not only for this race but also the championship fight. Polesitter Power of course has the advantage initially, although he will be braking on the dirtier inside line. Penske teammate Newgarden – who lies only 10 points behind him in the championship – naturally harbors his own championship ambitions, but at least through that chicane on the opening lap, Josef and Will need to work together to keep Rossi behind.

The Andretti driver is a resolute individual in wheel-to-wheel situations, and he will be eager to maximize his points haul in the hopes that Dixon will struggle from mid-pack. He can expect some degree of cooperation from teammates Ryan Hunter-Reay and Zach Veach who start immediately behind him, but the wild card is 37-time race winner Bourdais. The Dale Coyne Racing with Vasser-Sullivan pilot has no title considerations to hamper him, and he starts fourth…

Oh, and never count out Mr. Dixon. He’s four-time champ for a reason. Were he to make up four or five places on the opening lap, and go on to finish on the podium, don’t be surprised.

Should the race at the very front develop into a straightforward fight between the Penskes – although I simply don’t think Rossi et al will allow that to happen – it’s worth noting that Power thinks his car’s pace on Firestone’s alternate compound ‘red’ tires is strong, while Newgarden thinks his excels on the primaries.

Even four hours before the start of the race, the Oregonians and Washingtonians were crowding the paddock and the roads into Portland International Raceway. Let’s hope they are rewarded with a classic race under sunny skies. It’s great to be back.