Sound-off: Drivers involved give their take on race-ending crash 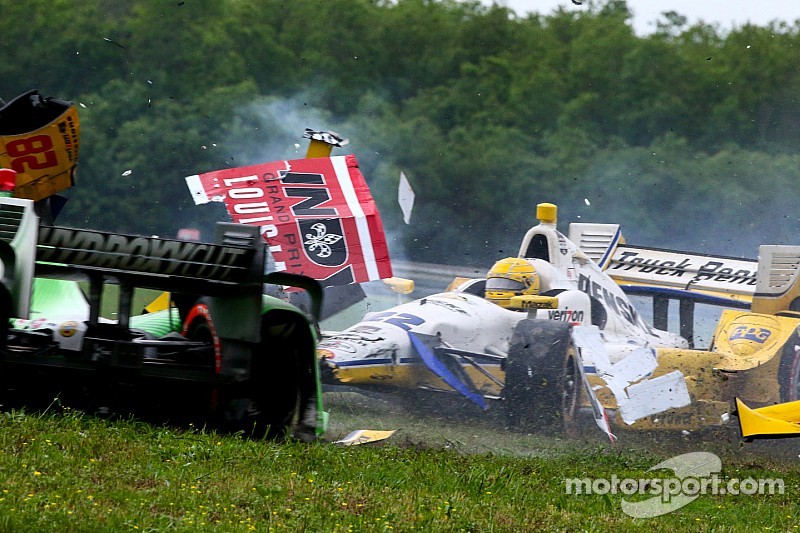 Motorsport.com spoke with all three drivers involved in the multi-car accident that ended the IndyCar race at NOLA.

It was not a professional move on (RHR's) side, and I just can’t believe he doesn’t see it, it’s stupid

The trio were involved in an accident heading to turn three where Pagenaud went off course after turn two after running out of room on Ryan Hunter-Reay’s right hand side.

Pagenaud and RHR not seeing eye-to-eye

Pagenaud slid on the wet grass with his dry weather tires and collided with Ryan Hunter-Reay and Sebastien Bourdais, cracking the tub on Bourdais’s car.

Pagenaud wasn’t too pleased with Hunter-Reay.

The guys out there, they need to up their games, I mean, we look like monkeys out there

Bourdais was just in the wrong place at the wrong time.

“If I had known obviously that Simon was in the grass I would have bailed out, but I didn’t see anything,” Bourdais said.

The fiery Frenchman wasn’t too pleased with the other drivers, like Pagenaud.

“Yeah, but the guys out there, they need to up their games, I mean, we look like monkeys out there. It’s just really time to stop behaving like we do because you have people spinning everywhere and it’s sad. It’s just a shame,” Bourdais said.

Pagenaud at least liked driving in the mixed conditions but was also put-off by the number of incidents.

“It was great, Indycar made the perfect call, track was really good, wet tires was fun in the beginning, then red tires, it’s really fun conditions, shame about so many yellows but that’s down to the drivers to keep it on the track.”

“It was really tricky just because it was in-between the whole time. So you were either on dries in the wet conditions or you were on wets in the drying conditions, it was really tough,” Hunter-Reay said.