Kanaan forced to withdraw after 18 laps

HOUSTON, TX - Saturday, October 5, 2013 - Competing in brutal conditions that featured temperatures in the mid-nineties and 100% humidity, KV Racing Technology driver Simona De Silvestro drove a spectacular race to finish a career-high second in the Shell & Pennzoil Grand Prix of Houston Race No. 1 in Houston, Texas. Teammate Tony Kanaan was forced out of the contest early with a braking issue due to high temperatures. 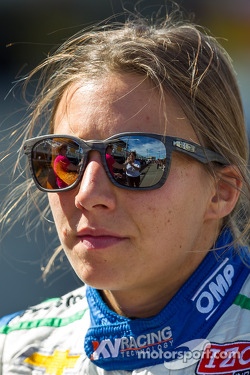 Following a problematic first day on track yesterday, Race One qualifying was rescheduled for today just hours before the start of the race. De Silvestro, behind the wheel of the No. 78 Nuclear Clean Air Energy - KV Racing Technology machine, qualified sixth, but gridded fifth after a penalty was accessed to a competitor for an unauthorized engine change. She moved into fourth place on lap eight and charged into third place on lap 26. De Silvestro was in the top-five the vast majority of the race and in the top-six for all but 11 of the 90-lap competition. She made several dramatic passes to remain in contention and drove a flawless race. In addition to it being her first IndyCar career podium, it was also her IndyCar career best finish, third career-top-five and second in as many races.

"Finally we have our podium," De Silvestro said. "We've been waiting for this for a long time. It seemed like a pretty good car the whole weekend. I qualified up there and then the race went actually pretty good. I really have to thank everybody at KV Racing, and also everybody from the Nuclear Clean Air Energy campaign for sticking with me. I also want to thank AREVA for bringing out the engineering students from Texas A&M. I guess they're my good luck charm and will have to show up tomorrow and hopefully we can do even better."

"Very happy for Simona," said Imran Safiulla, Director of the #78 Nuclear Clean Air Energy car. "It's a great day in her pursuit as she moves up the ladder in her IndyCar career. It's a great day for our team; a great day for our campaign. She has one more step to go and she'll get that soon. I'd like to thank all of our partners in the Nuclear Clean Air Energy campaign including Entergy and AREVA for continuing to believe in us; Chevy for giving us a great platform and for the entire team for all their hard work to get us to this point. Hopefully there'll be a lot more success. Hell of a job by Simona; she did a fantastic job and we're proud of her." 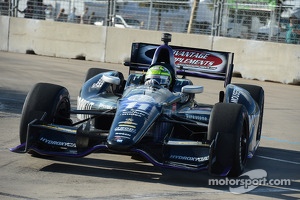 Kanaan, in the No. 11 Hydroxycut - KV Racing Technology - SH Racing entry, qualified 15th and started 13th after penalties to two competitors for unauthorized engine changes. He quickly moved into 11th place, but shortly thereafter his brake temperatures began to soar. At that point, because of the brake issue, Kanaan began to lose positions. On lap 18, he was headed to the pits because of the brake issue, but before he could get there he slid off track as a result of the problem. The team took the car back to the garage, affected repairs and Kanaan returned to the track for a 15-lap shakedown in preparation for tomorrow's race. He finished today's event 21st.

Commenting on his day, Kanaan said, "We had an okay car to start the race. Then unfortunately the brakes started going away unexpectedly. I tried to keep the car on track, but at that point it was impossible to drive. I brought it into the pits and the guys worked on it in the garage. We went back out for a few laps to check it out. Hopefully, we can have a good qualifying effort and a good race tomorrow."