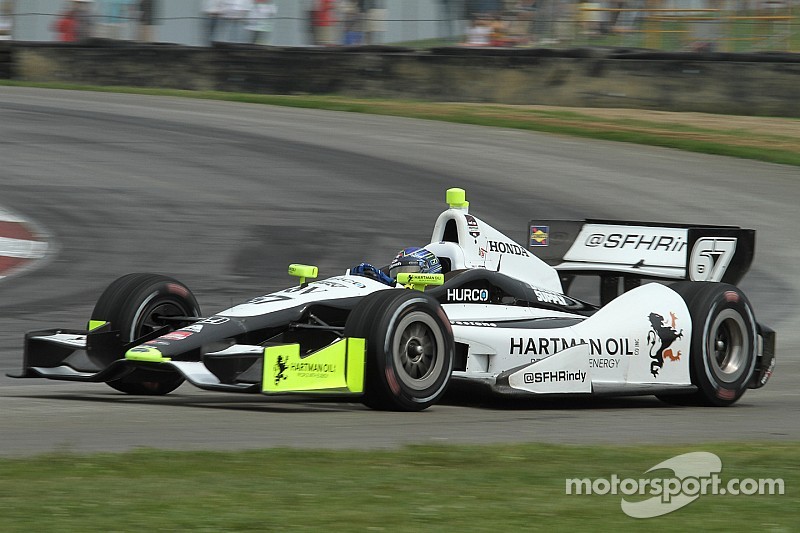 Josef Newgarden came within arm's reach of his maiden IndyCar victory this past weekend before a botched pit stop dashed his hopes.

It’s hard to do anything but cheer three-time Verizon IndyCar Series champion Scott Dixon’s victory at MId-Ohio Sports Car Course on Sunday afternoon, as the Kiwi came from 22nd and last after botching his qualifying to finish first under the checkered flags after 90 laps of intense competition, giving Target Chip Ganassi Racing their first win of the 2014 season.

But my heart, and I’m sure many others,’ was in my gut after watching the horrid final pit stop that robbed third-year Indy car racer Josef Newgarden and Sarah Fisher Hartman Racing (SFHR) of their first victory together.

When it all went wrong

Newgarden had a good five seconds in hand when Andy O’Gara called him in at the last second for (what turned out to be) his penultimate pit visit. An air gun lay in Newgarden’s path and the crew was unprepared. When Josef landed on the air gun, his right rear tire changer was unable to reach position and fell. It looked, and I’m sorry to say this to SFHR, a team I admire for their tenacity and skills, like the Keystone Kops were performing at Mid-Ohio. It wasn’t professional and the result, a fall from the lead to a 12th place result was debilitating for Newgarden, for the team and for the many fans that were hoping the tide would turn for Josef.

Newgarden has come up through the Mazda Road to Indy ranks and the Nashville, Tenn.-bred racer now has the maturity and knowledge to win in the Indy car series. His maturity after the race, not being a jerk and not putting blame where it solidly belongs - on the team’s back - shows him to be the kind of racer (I keep using that word, not driver, because there’s a huge difference) who’s ready for prime time.

Is it time to look elsewhere?

The big question is whether he can reach his full capabilities with Sarah’s squad. Sure, they have a win under their belts in 2011 with Ed Carpenter on the Kentucky Speedway oval, a victory that required the kind of good pit work that eluded them this past Sunday. That win also needed race craft, something Carpenter has in abundance and which Newgarden has begun to achieve in his nearly three years in the Verizon series.

He looked prime for success at Long Beach this April before being taken out by eventual Indianapolis 500 winner Ryan Hunter-Reay in a turn where no passing has ever taken place. That was RHR’s error, but a quicker pit stop by SFHR might have helped Newgarden avoid the problem of a pouncing RHR as Newgarden might have been farther ahead when the duo approached that ominous fourth turn.

Newgarden’s fine form in the race car continues to grow and he’s ready for prime time. The huge question is why, as it is with Frenchman Simon Pagenaud, has no large, well financed team taken him into their squadron? It’s a head-scratcher for sure.

But be that as it may, my heart aches for what could have been for Josef Newgarden, a 23-year-old with the racing skills of a veteran and a joyous personality, has shown he deserves better than what he got on the Mid-Ohio Sports Car Course race track on Sunday.

Newgarden and his team have only three more opportunities to get that first win together in 2014: in a week and a half at The Milwaukee Mile, on the natural road course of Sonoma Raceway and with the season finale, a 500-mile enduro set for Auto Club Speedway Labor Day weekend.

Maybe Josef Newgarden and his Sarah Fisher Hartman Racing team can surprise all of us and make it to the top step at one of those three contests? Stranger things have happened and that’s why we still hold these races; to find out.

Dixon adds to his legacy with another Mid-Ohio win