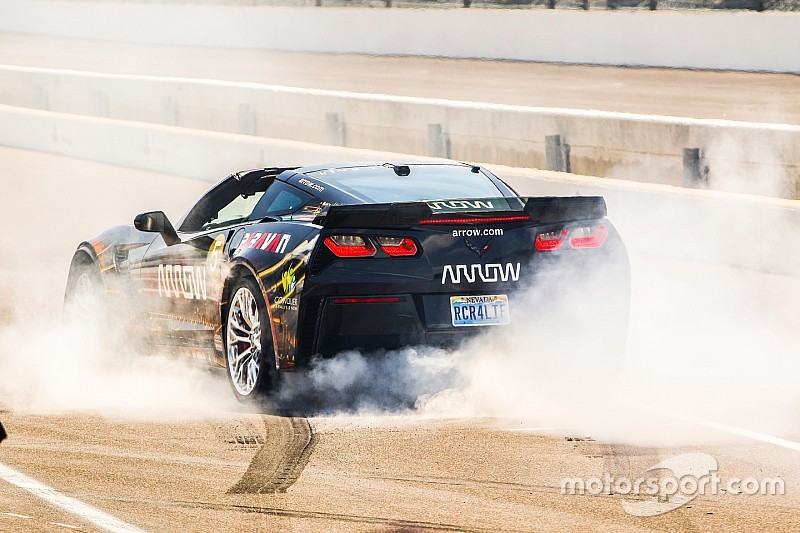 Schmidt was rendered a quadriplegic following his crash at the now defunct Walt Disney World Speedway in 2000. Two years ago, Schmidt collaborated with Arrow Electronics on the "SAM Project," which put the team owner in the driving seat of a modified Corvette C7 Stingray.

Back then, the car was governed by head-tilt technology, but in collaboration with Schmidt, Arrow – which became primary sponsor on SPM's #5 car driven by James Hinchcliffe – evolved the system. Now the semi-autonomous system uses motion capture technology, and involves Schmidt steering the car with his head, and blowing down a tube to apply the throttle, and sucking on it to apply the brakes.

That is the technology he used at Indianapolis Motor Speedway this past May setting four laps at an average above 100mph, and reaching a peak speed of 152mph. He followed that up by participating in the Pikes Peak Hill Climb in June.

The license presentation at Las Vegas Motor Speedway at approximately 10:40am PST will be followed by exhibition laps by Schmidt on LVMS road course, and trips onto the public highway.

"This has been an incredible journey," said Schmidt. "What started as a hope and a dream to go 100mph has taken on a life of its own. Quickly changing technology no different than advances in cell phones have allowed us to compete on road courses, go 152 miles per hour at Indy and complete the Pikes Peak Hill Climb. These were all ridiculous thoughts three years ago.

"Getting a drivers license is not the end of the road, but it is the ultimate example to tell the world you can absolutely accomplish anything, if you combine resources with the right group committed to a common cause.

“It has truly been a life changing experience for me and my family."