Schmidt hopeful for Wickens, calls for barrier changes on ovals

Sam Schmidt has spoken candidly about his hopes for Robert Wickens following last Sunday’s shunt at Pocono Raceway, what the IndyCar rookie has done for the team, and the safety changes he wants introduced on ovals.

Schmidt was left quadriplegic after a shunt on the Walt Disney World oval in 2000, when his spinal cord was badly damaged in the cervical C3-C4 vertebrae region. But the 54-year-old from Lincoln, NE, told Motorsport.com he was hopeful of a far better outcome for Wickens following the Canadian’s surgery last night.

“We’ve had all the experts chime in, done all the protocols that IndyCar does – I can’t praise enough the IndyCar Safety Team and how they work with the local hospitals and surgeons – and so everyone’s done a fantastic job.

“The doctors are ticking all the boxes, doing everything they can, everything that needs doing for someone after such a violent crash when circumstances push the car and the human body to the absolute limit. After the other injuries [to his lower extremities and arm] are dealt with, we can hopefully get Robbie moved to Indy – that would be ideal.”

Asked if, should all surgeries and rehab prove successful, he believes Wickens could eventually return to the IndyCar Series, Schmidt said: “I think so, I hope so. I’ve only known Robbie for about a year but he’s the type of guy for whom racing is his life, he’s really enjoying IndyCar, he likes the atmosphere and the quality of the competition. It seems to suit him so well.

“So if he feels he can still be competitive, I have no doubt that he would come back. He’s the type of committed, driven individual who can overcome huge setbacks.”

MEDICAL UPDATE, Friday August 24 from SPM on Wickens: “Surgeries were performed late this week on his right arm and lower extremities without complication. The extent of the spinal cord injury remains indeterminate. Wickens also underwent a series of precautionary tests that found no indication of further injury. 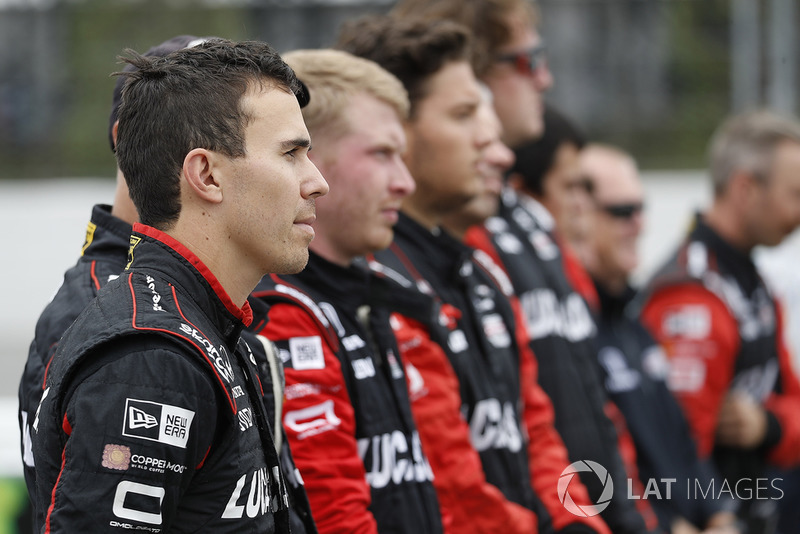 Wickens has been “inspiring” for SPM

Schmidt spoke movingly of the devastating effect last Sunday’s shunt has had on morale within the SPM team which, since running Dan Wheldon at the tragic 2011 race at Las Vegas Motor Speedway, has also seen Mikhail Aleshin suffer a burst aorta in a huge shunt at Fontana in 2014, James Hinchcliffe’s horrific internal injuries at Indy in 2015, and now Wickens’ shunt.

“I’m sick of our team having to be the most resilient team,” said Schmidt. “No one on our team is in this business for the paycheck: they have a passion which sees them put up with so much time on the road, and learn how to live with each other. We have that bond because we’re racers and we want to win every time, and running well, weekend in, weekend out, just increases that intensity.

“And Robbie has already become such an intrinsic part of that, despite being a rookie in IndyCar,” Schmidt continued, describing his latest ace who not only scored a pole on his IndyCar debut, but also four podium finishes. “He’s such a hard and talented driver that he makes everyone else in the team raise their game, higher than they’ve ever been before, and you see it in the pitstops, in the chassis development, and so on. He’s testing people, but he’s also inspiring them and so that also draws the team members closer.

“But that’s what makes this kind of situation all that much worse,” he sighed. “We all recognize his talents and we don’t know if he could have got third or fourth in the championship this year, but he’d have given it a hell of a try. That’s just a fantastic performance by a rookie, however much experience he had from other series.” 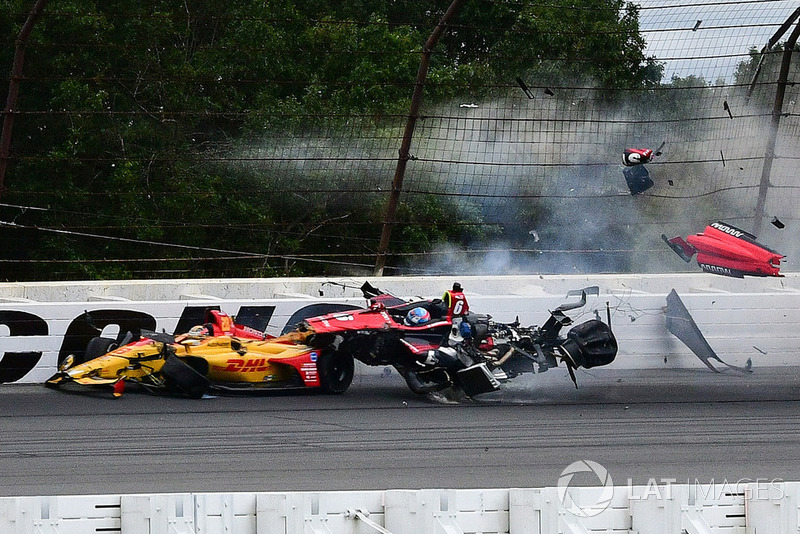 Schmidt says car “did what it was supposed to do”

On the subject of how well Wickens’ Dallara chassis withstood the accident, Schmidt commented: “I’m sure more analysis will be done by IndyCar, but from what I can tell, it did absolutely what it was supposed to do.

“I mean, there’s nothing left of it. There’s catchfence pieces intertwined in the entire chassis. It’s just a big pile of crap without a usable part – but that’s how it’s supposed to be, to dissipate energy during an accident like that. It helped protect the one element it’s supposed to protect – the driver.

“To see Robbie with his eyes open at the infield care center was huge, because 40 minutes of silence was just too long. Kudos to Dallara, the folks on the technical side of IndyCar, the Safety Team, and all the people who’ve contributed to the procedures and protocol that has been built in to the IndyCar system to cover those situations.

“You know, going back to the Safety Team a moment, I just have to say thank God for those 15 or 20 men and women that travel to all our races and have the same passion for racing as us. They save lives and care for the injured – whether it’s James, whether it’s Robbie, whether it’s Mikhail… Without the Safety Team, we’d lose more drivers.” 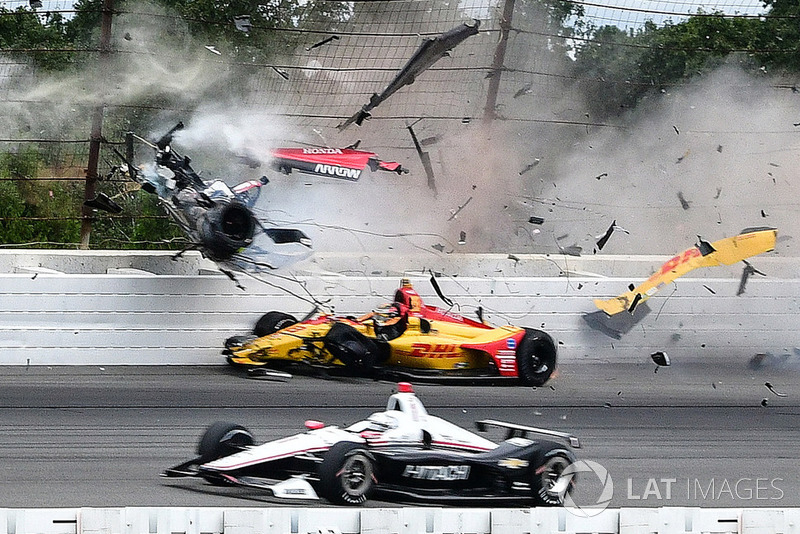 Higher SAFER barriers should be introduced

Since Wickens’ accident, there have been renewed calls for U.S. motorsport series and venues to seek alternatives to catch-fencing which, when a car ‘digs in’ during a high speed accident, will send the vehicle into violent gyrations. Fencing also tends to shred large and small pieces off the car, causing debris on both sides of the fence.

Some have even suggested an appropriately strengthened version of the poly(methyl methacrylate) commonly referred to by the brand name Plexiglass, but while Schmidt is among those eager to see the situation remedied, he thinks the solution is more obvious.

“We’ve got to figure something out,” he commented, “and I’ve been saying this since Dan [Wheldon] died in 2011. I hate complaining about something or calling for changes when I haven’t got a solution. I’m not the guy with the answers.

“But what I’ve asked for since then is that in the turns where there is no grandstand so no spectator sight-lines are affected, I think they should go double-high with the SAFER barrier.

“Maybe that’s only a short-term fix, but the SAFER is tested and it doesn’t spring the cars back onto the track like some people have worried about regarding the ‘Plexiglass’ solution.

“If you looked at a replay of Mikhail’s accident, at Robbie’s accident, and others – including NASCAR – another three feet of SAFER barrier would have contained the car within the track without this cheese-grater effect that catchfencing has. I don’t know if that’s a longterm fix, I don’t know the level of investment required, but certainly on turns where spectator viewing isn’t an issue, the oval tracks need to do something like that.” 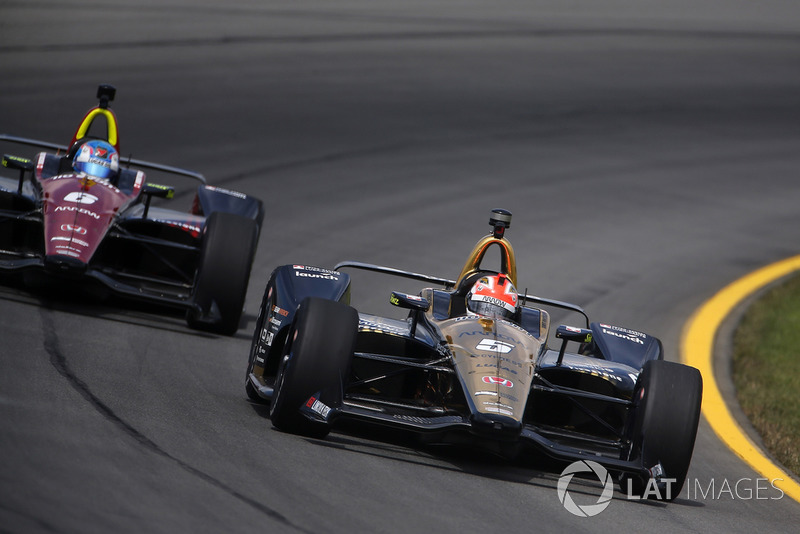 Schmidt undecided on who’ll sub in the #6 car

Schmidt said he still couldn’t confirm when or even if a substitute for Wickens would be found before the end of the season. The team revealed today that it would run just Hinchcliffe’s car at Gateway this weekend. The Portland race is the following weekend, with the Sonoma finale two weeks after that.

“For the last two races, I don’t know yet, I honestly don’t know,” said Schmidt. “As we discovered at Indy [when Hinchcliffe failed to qualify], we have incredible partners and we called all of them to discuss the situation. All of them said, ‘We need to focus on Robbie, focus on his needs, focus on his family, focus on Hinch having a successful finish to the season, and you don’t have to do anything for us.’ It was great to have that unity.

“As I alluded to, we’re racers and we want to race, but the minds of everyone within the team are inevitably distracted right now as we keep Robbie in our thoughts. Trying to introduce a new driver this weekend, so soon, would be another distraction. For Portland and Sonoma, I don’t know yet.”

Although Schmidt wouldn’t outright state that he wants a driver with money, the fact that the team has, as he said, nothing salvageable on the #6 car and heavy damage on Hinchcliffe’s #5 car, would suggest that he and co-owner Ric Peterson would ideally seek a funded driver to substitute for Wickens.

“The phone’s been ringing off the hook with potential replacements,” said Schmidt, “but first I want to get the team in a huddle this weekend to discuss the best way forward. Having three races on back-to-back-to-back weekends is difficult enough, and logistically it’s not helpful when they’re a superspeedway followed by a short oval and then a road course. It’s prohibitive from a timing standpoint.”

Chaves returns to Harding at Gateway

How Robert Wickens defied expectations on his heroic return to glory