Rossi: “It sucks… we’re always playing bridesmaid as of late” 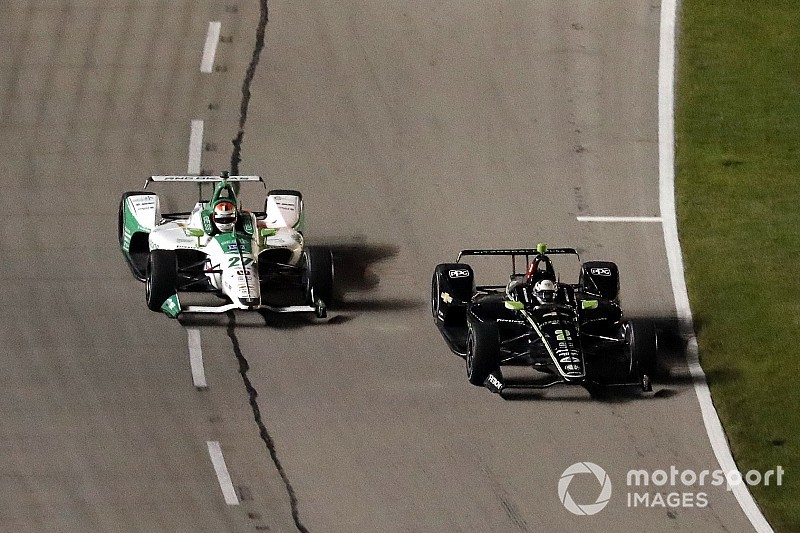 Andretti Autosport-Honda driver Alexander Rossi says narrowly losing out to a Team Penske-Chevrolet driver for the third time in four races is getting old.

In the Indianapolis 500, the first Detroit race and at Texas Motor Speedway, the former F1 driver has been left staring at a Penske rear wing on the final lap, missing out by a combined total of 1.8487sec, or an average of 0.6162sec.

Worst of all from Rossi’s perspective is that the last two near-misses have been in the wake of Penske’s Josef Newgarden, the driver standing between Rossi and the points lead. After nine of the 17 rounds in the 2019 NTT IndyCar Series, Rossi’s deficit is 25 points to the 2017 champion.

Speaking of his Texas defeat, Rossi, said: “I think we had a good car, could obviously get a good run on him off of [Turns] 3 and 4, but lane two [the outside line] was really never there for me. We could get halfway around the outside but we’d have to bail out.

“I could have maybe took a bit more of a risk, but it was pretty low percentage. I didn't think a lot of guys were making it happen. Ultimately then it became about trying to beat him for the line. But we took out a lot of the tire life going in lane two there, so we just didn't have the rear tires there at the end to stay close to him.”

Newgarden’s four-stop strategy enabled him to nail super-fast laps in clear air while the three-stoppers pitted for the final time and therefore resume in the lead. It also meant that Newgarden’s tires were 11 laps newer, but Rossi wasn’t convinced that would have altered the outcome of their duel over the closing laps.

“I think where that difference came was kind of the last four laps,” he replied. “I kind of fell off of him. So, yeah, I think that was really ultimately the biggest issue for me, was I couldn't keep the challenge on him. But I don't know that the end result would have been any different. I would have kept trying to go high in [Turns] 1 and 2. I mean, I tried it like six times and it never worked, so I doubt it would have worked if I tried another three or four times.

“The fact of the separation, we weren't able to kind of challenge him to the [start/finish line] was a difference in tire life but probably didn't affect the end result.”

Seeing Newgarden appear up front for the final stint, having been running in the lower reaches of the Top 10 for most of the day, was a surprise, Rossi admitted, especially as he was confident that had he reached the front, he could have similarly held off the Penske driver.

“It sucks. I mean, I didn't see him up front all day. All of a sudden he appears in P1, so... Obviously they're doing a good job. He had a fast car once he got in front. Ultimately I think Scott [Dixon], myself and Colton [Herta] in terms of fuel mileage and where we were going were looking pretty good there until the end…

“It's all track position here unfortunately. It's a superspeedway but the current package we have – I mean, we saw it at Indy, we see it here – [means] it's really hard to stay in touch, being the car behind, to be able to carry the throttle that you need to. The dirty air has a really big impact on the car. It's really hard to get a good run on a car.

“It's not hard to pass cars that are struggling, cars that are off sequence with different tire life, whatever. [But] when you have a Penske Chevrolet driven by someone as good as Josef, there's only so much you can do, right?