Alexander Rossi says his second place at Toronto, finishing less than two seconds behind the winning Penske of Josef Newgarden, was a result of a major advance by Andretti Autosport on street courses. 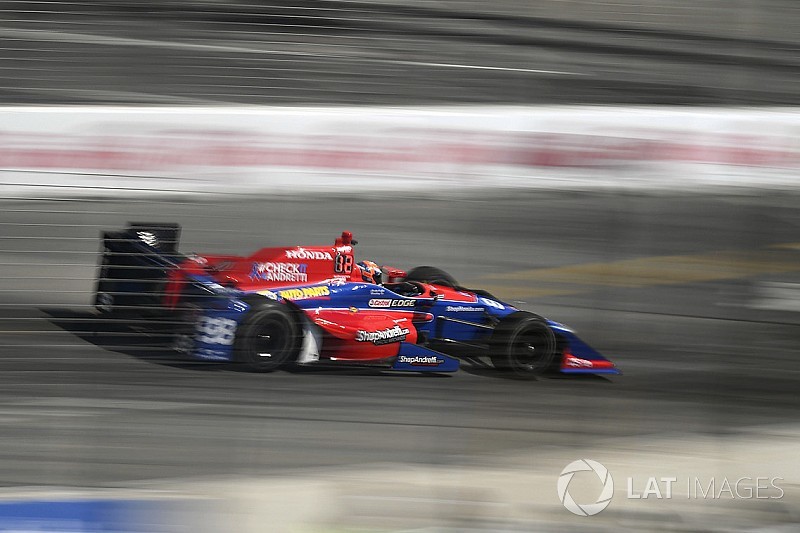 The Californian scored his first podium finish since his surprise victory as a rookie in the 2016 Indianapolis 500, and teammates Marco Andretti and Ryan Hunter-Reay finished fourth and sixth, respectively. But Rossi said the comeback the team made since struggling in Friday practice was the most encouraging part of the weekend.

He commented: “We were… staring into the bottom of the barrel Friday afternoon. We were really lost. We were the slowest. We had a lot of soul searching Friday night. We stayed quite a bit later at the track than in a long time. We just really analyzed everything that we could, and made some pretty solid changes overnight that suited me really well Saturday.”

Rossi qualified eighth, and only fell out of the Firestone Fast Six during a last lap sprint following a red flag period. In today’s race, he ran sixth right behind James Hinchcliffe in the opening stint, but pulled into the pits early to try and jump ahead of the Schmidt Peterson Motorsports driver in the pitstop exchange, and it proved to be a fortunate move. A full-course yellow and closed pit relegated the top three runners, and Rossi then ran second, battling Newgarden to the checkered flag.

“Today again we made a pretty big step forward,” said Rossi who now lies eighth in the championship, albeit 93 points behind leader Scott Dixon. “It's a huge relief to finally get a podium and get it off our back. Something we've been close to and searching for, for a long time, and it hasn't happened. Finally we made the right calls and made it.

“[Andretti Autosport] is a really good group of guys. If you look at where we were last year – the last four cars in qualifying – to having three cars in the top 10, really having something to fight for today, is a testament not only to this weekend and the strength the team has shown, but also this off-season and how much better 2017 has been for us, has been for Honda.
“I think things are starting to finally come together. We've been looking for a breakthrough this year. I think this is it. Hopefully we can take this momentum and carry it forward to tracks we should be strong at. I look forward to doing that for the next races remaining. Hopefully we can climb up and get that win.

“As we always say at Andretti, when one car finishes, one car is doing well, kind of all cars rise. I think it was a very good example of that today. Yeah, like I mentioned before, the difficulties we had last year especially in Toronto, they were pretty significant. So to rebound like we have is pretty incredible, and something that's very hard to do in this championship, and this sport in general.

“You know, I think the additions of Eric Bretzman and Jeremy Milless have been huge in the contribution to that. I feel like we have a really good group of people and we're making progress every weekend.”

Newgarden: “We absolutely can win the championship”