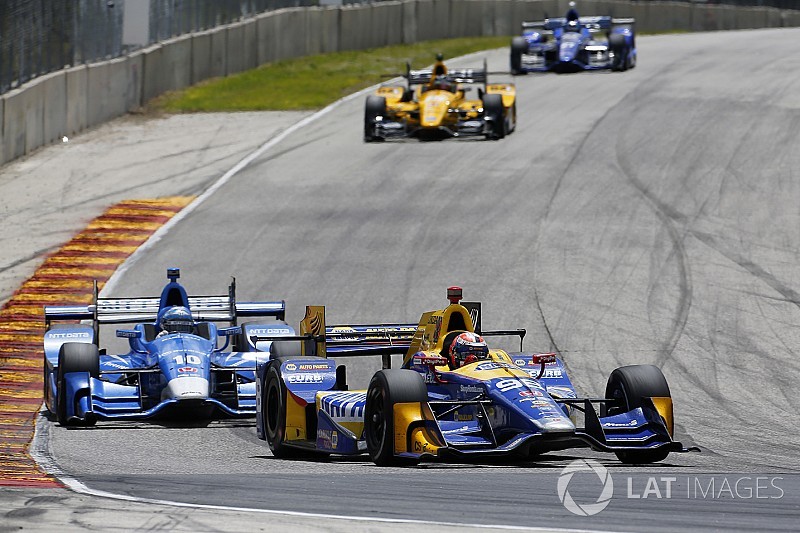 Alexander Rossi says the clash with Tony Kanaan that saw the Ganassi driver hit the wall at the fast Kink was a result of the Brazilian veteran misjudging his closing rate on the struggling Andretti Autosport car.

Coming off the Carousel corner on Lap 46 of the 55-lap race, Kanaan was rapidly closing on Rossi, and pulled to the inside to pass him, but the front-left wing of the Ganassi car snagged hard enough on the Andretti car’s right-rear bumper pod to break. Bereft of front-left downforce for the right-handed Kink, Kanaan plowed off the track and hard into the barrier.

Afterward Kanaan commented: “[Rossi] blocked me and put me in the wall. I don't think it was a nice move at all, but I'm not going to waste my time with it. My wrist is a little sore, but I'm OK overall. That was a big hit.”

Rossi, who spun into the wall at the previous race in Texas after a clash with Kanaan, disagreed 100 percent with his rival’s explanation for the Road America incident.

“If you look at my onboard, if you look at his onboard [see video below] I think I gave him plenty of room,” he told Motorsport.com. “I had a broken front wing – it wasn’t a tire issue, like I said on the radio – and I was going through the Carousel in third gear, where I’m normally in fifth.

“So I was obviously quite a bit slower than I had been all race, quite a bit slower than Tony, and so the approach speed was pretty quick. I thought about defending – you saw my Push to Pass light come on and I moved maybe half a car width off the white line on the exit of the Carousel, but there were still two to two-and-a-half to three car widths to the inside. And he just clipped my wheelpod as he popped out to pass.

“Obviously I’m happy he’s alright because that was a big hit there, but I don’t take any responsibility for it.”

Rossi admitted that he was left frustrated by the event as a whole, however.

“I had an engine issue yesterday which is why I started 15th,” he said, “but that was resolved today and I think we did the right thing to go for a four-stopper. That pace we showed in practice and in warm-up this morning was obvious for the first 75 percent of the race. The yellow flag [for teammate Takuma Sato’s shunt on Lap 29] hurt us on the four-stop strategy, but even with it I think we could have been eighth or ninth, because our pace on the red tires was pretty awesome.

“But then on my out-lap after my final stop, an upper front flap failed, and from looking at it, it seems a bolt just broke. It wasn’t from being hit or from me hitting anything; it just failed. So I was missing five to seven percent aero balance.

“To have a front wing break here for two straight years is just crazy.”