Rossi on the science behind his Indy 500 near miss

Timing and motorsports go hand in hand, and one of the most significant numbers of last weekend’s mega motorsport events was the 0.2086s that Alexander Rossi fell short of second Indianapolis 500 win, as Simon Pagenaud beat him with a daring late-race pass and then fended him off until the final time across the famed yard of bricks.

Before the race I sat down with Rossi and asked about the art of passing at Indy, where the huge advantage of being able to slipstream a car in front – and catch them in the tow – becomes a disadvantage in the corners, where the lack of clean air on your front wing means you have to lift off or you’ll be heading straight into the wall.

We’d already witnessed a thrilling Indy Lights race on Friday, but Rossi says that it’s a completely different ballgame behind the wheel of a 230mph+ IndyCar.

“It’s very different in an IndyCar compared to the Indy Lights, cos they can be pretty much flat in traffic, they have two or three lanes that they can work with,” he explained. “For us, it’s very much a single-groove racetrack.

“The cars are super-sensitive to aerodynamic outwash from the car in front. For us, the timing is how much do you back off through Turns 1 and 3 to be able to get enough distance to be flat in 2 and 4, which allows you to catch up at the right time on the straights. It’s very easy to lift off too much, and by the time the engine re-spools up you’ve lost the tow to work, or you don’t lift enough in Turns 1 and 3 and you’re too close in 2 and 4, so you have to lift anyway.

“It’s about timing the lift, and sometimes – going into Turn 1 for example – we’ll lift at the yard of bricks. The tow is so much, even at zero percent throttle you’re still staying with the car in front to a certain extent.” 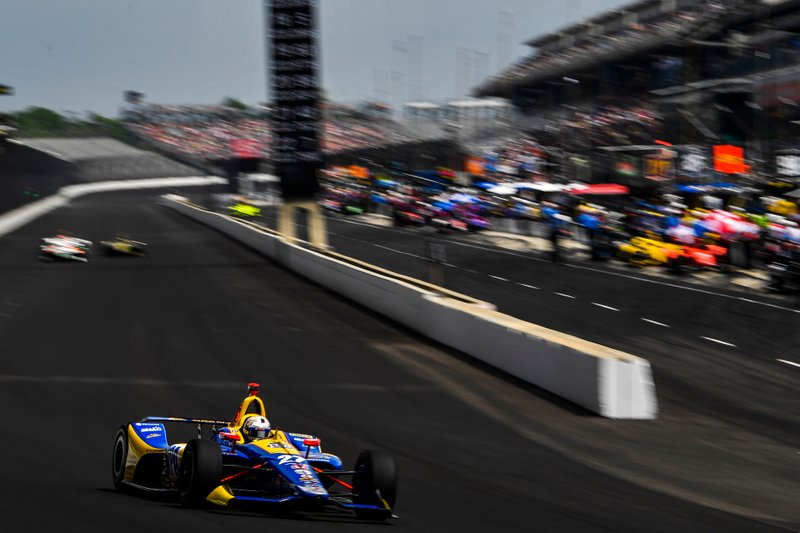 Now let’s just take a step back here and comprehend that statement: lifting off the throttle at the yard of bricks is 680 feet away from turn-in for the first corner! Yet such is the force of an IndyCar slipstream at that speed, you only fall back slightly from a car ahead that’s still on full throttle! I made a point of watching the race there, and that’s exactly what was happening when a car wasn’t close enough to get ahead – it would roll right out of the gas, and build again.

Another fascinating place I discovered to watch was near the tunnel after Turn 2, where you could hear far higher revs from a car that had run flat through the previous corner and was benefitting from the slipstream of a car in front on exit. That’s the true art to passing in these cars around here – allowing drivers to set up the slingshot along the straights.

The duel between Pagenaud and Rossi was the highlight of a great race.  For Rossi, he overcame a terrible pitstop – due to a fuel rig malfunction – to roar his way back to the front, swerving around the obstinate Oriol Servia (who was a lap down!) and a host of others to set-up one of the great late-race showdowns in the 500’s illustrious history. A Turn 3 pileup caused the race to be halted while the mess was cleaned, and Rossi felt his best shot to beat Pagenaud – better fuel mileage – was suddenly not a factor. 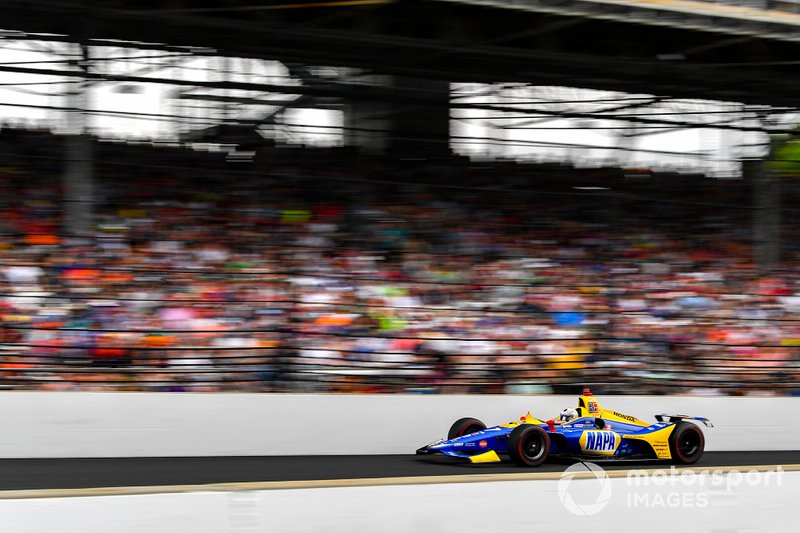 “We just didn't have the straight-line speed,” he rued later. “There's not much we can do about that from inside the car.

“That last yellow really hurt us because we were doing a lot better on fuel mileage than [Pagenaud] was, so that was the first kind of nail in the proverbial coffin. We didn't have the speed out front. I mean, I was flat for the last 15 laps, and there's not much more you can do.

“It was pretty inevitable. On the last restart, he just drove by us. There was the opportunity there to get the lead. I had been working on it for 12, 13 laps, and it finally came, and I didn't have a choice, I just had to hope that maybe he would lose so much behind me and that Takuma [Sato] or Josef [Newgarden] or whoever would get him, and I would be able to have enough of a cushion for the final two laps. But I passed him in 1 [with three laps to go] and he was straight back by me into Turn 3 [a lap later], so there was nothing I could do.”

Rossi was magnanimous in defeat, saying Pagenaud and his team “deserved” the win. Since his famous victory in the 100th Indy 500 in 2016, Rossi has been associated with TAG Heuer, the official timekeeper of the race, but this time he had to sit and watch Pagenaud get presented with the Carrera Indy 500 special edition. 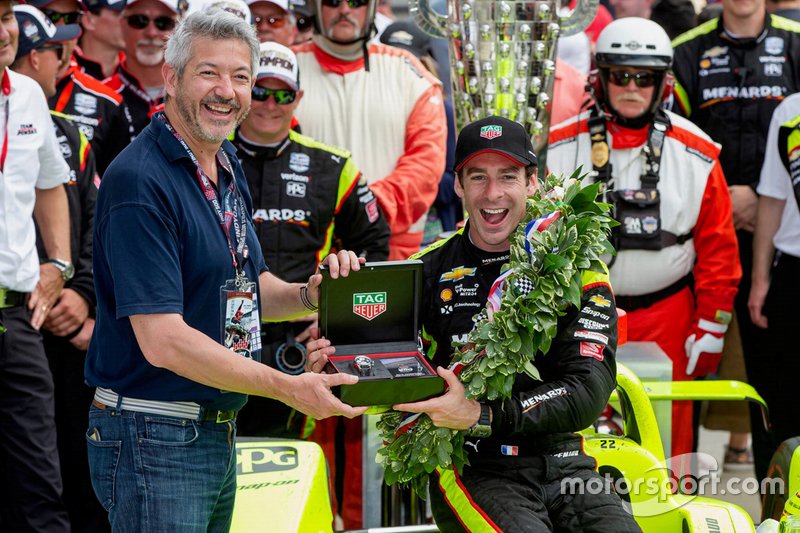 “The TAG Heuer connection came after the 500 win in 2016, and I have a partnership with the brand, which has been involved with IndyCar and the track, and it all tied together with me being an American driver, so we’ve been together for four years,” Rossi explained. “I’ve always been a fan of Alec, who has a connection to TAG Heuer as an ambassador, and last year I came up with the idea of reaching out to see if he’d paint my 500 helmet. Logistically that was difficult but he was willing to design one, and it came out pretty awesome, it was quite extreme from my regular helmet design standpoint, and everyone loved it.

“So I kept asking if we could do another one, and the TAG Heuer designers themselves came up with this concept. They knew Steve McQueen was an icon of mine, a truly awesome guy, so they put this together so it’s a retro throwback to his legacy and also with some vintage TAG Heuer designs, with some watch faces and logos entwined – thought it was cool, people seem to like it, so I hope we can keep doing it for the next few years.” 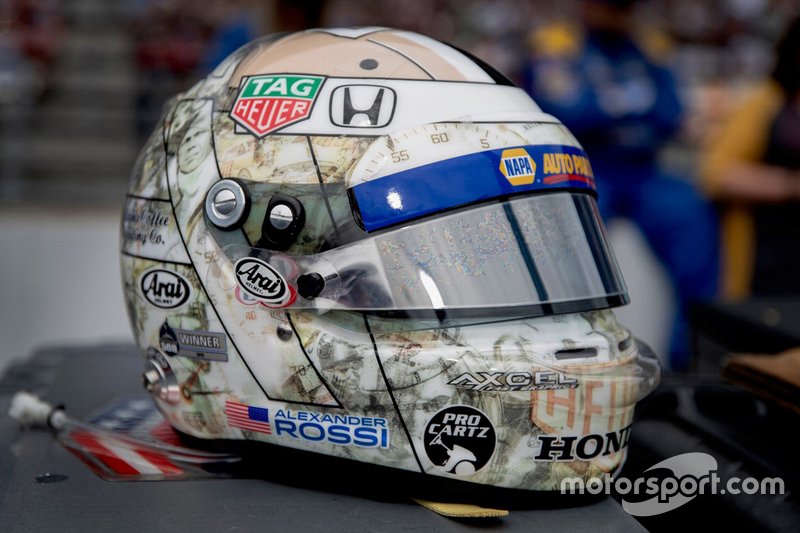 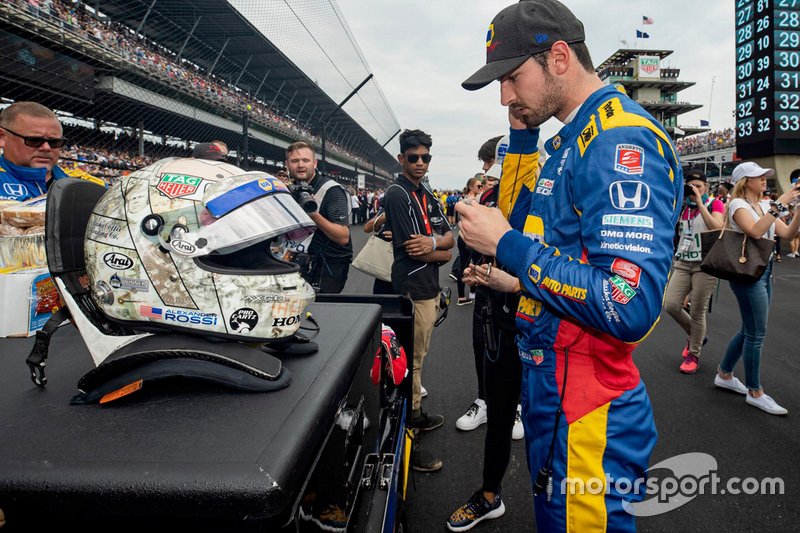 And although deeply disappointed to miss out by two-tenths of a second, Rossi should have many more attempts to win that second Indy 500.

He certainly proved that he’s mastered the art of timing the run, having charged back into contention after starting ninth, and then bouncing back from the delay in the pits that dropped him to sixth.

“The car was by far the best in the field in terms of what we could do and pass at will when I needed to,” he said. “I didn't see anyone else doing that.

“But once you've won this thing once, the desire to win just ramps up exponentially every year, so it sucks to come this close and really have nothing that we as a team could have done differently. I'm proud of them. I'm proud of the effort that they always put in, and yeah, when we get No. 2, it's going to be probably a huge explosion of emotions because we all want it really bad.” 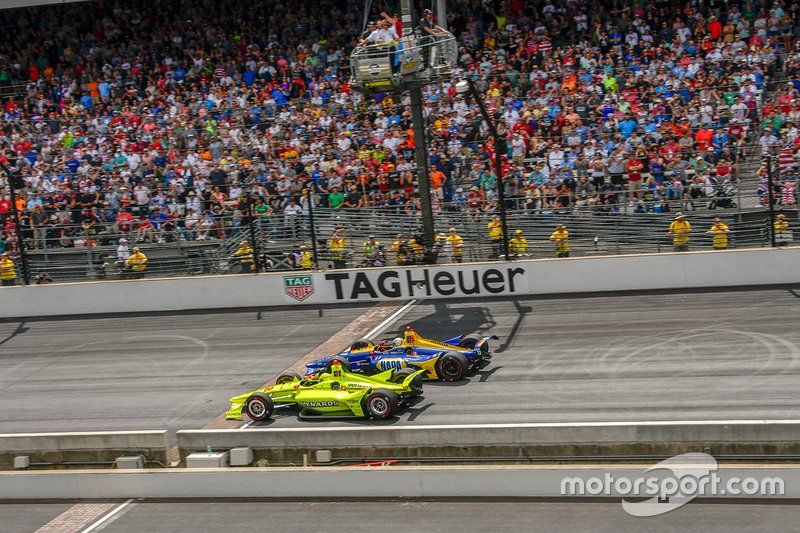 Satisfaction and frustration at Indy for Arrow SPM