Rossi "doing due diligence” on all Honda IndyCar teams 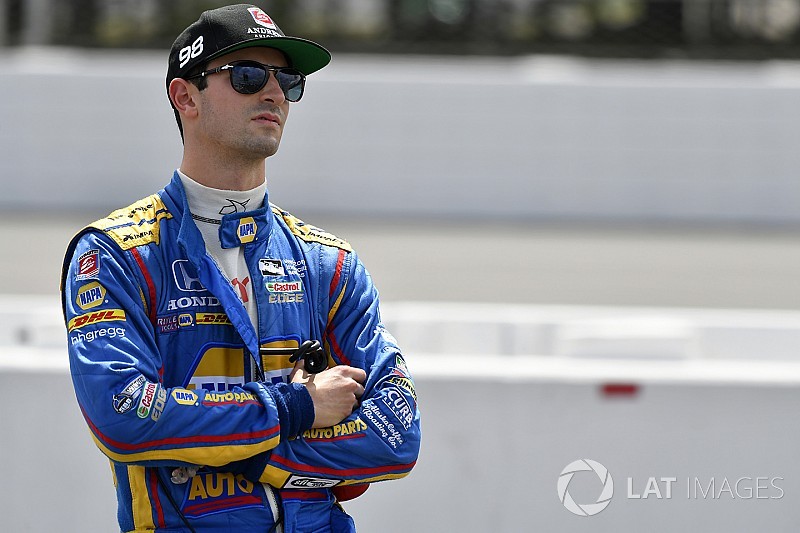 Andretti Autosport started IndyCar’s latest turbo era, in 2012, with Chevrolet but when Chip Ganassi Racing switched from Honda to Chevrolet for 2014, AA went in the opposite direction, and has won three of the last four Indianapolis 500s, including Rossi’s triumph last year.

However, with Ganassi switching back to Honda this year, Chevrolet have felt notably short of race-winning cars – a problem masked by Team Penske’s extraordinary run of success.

Since June, rumors have been rife of Andretti being wooed back to the Bowtie fold – but speculation since last weekend’s event at Gateway were that Andretti would remain with HPD and that Rossi would therefore stay put.

Rossi scoffed at such stories, and told Motorsport.com on Monday night: “The big domino was always going to be the potential for Andretti Autosport to become a Chevy team and to the best of my knowledge, Michael hasn’t even made the decision. So to say I’ve re-signed with Andretti simply isn’t true because I literally have no clue what engines his team will be using!

“When the talks and rumors started, because of my relationship with Honda, we – myself and my ‘team’ – naturally started talking with other Honda teams. So now we’re still continuing down that road to see what the best fit may be.”

James Hinchcliffe is known to be eager to have Rossi as his teammate at Schmidt Peterson Motorsports next year, and Schmidt has told Motorsport.com that he’s very interested in both Rossi and one of his current teammates, Takuma Sato, driving his #7 car SPM-Honda next year.

“Yeah, we’ve talked with Sam, that’s no secret,” said Rossi, “and I’ve met with the team. They have a very interesting program, I obviously know James very well and I’m confident that together we’d be strong. Through 2016, I think you’d say Schmidt were stronger than Andretti.

“But as I’ve also talked about, in 2017 Andretti has made pretty awesome gains and there’s nothing to say they won’t grow further in the upcoming offseason.

“So that’s the kind of thought process we’re going through. There are pros and cons to weigh up with all the Honda teams, whether you’re talking Andretti, Schmidt, Ganassi, Rahal… all things you have to evaluate. There are some conversations that are further along than others, but on the other hand there are relationships I’ve formed at Andretti, and I have a lot of positive things to say about them.

“But like I say, we’re waiting on their engine decision, like anyone else. So I can tell you now that there has been no commitment from me and my team to anyone regarding what we’re doing for 2018 and beyond. The only thing I can say is that I’m sticking with Honda!”

Asked if he thought there was a chance that Andretti Autosport’s current lineup – Ryan Hunter-Reay, Marco Andretti, Rossi and Takuma Sato – could remain identical for 2018, were it to remain an HPD team, Rossi said, “Absolutely, 100 percent. And maybe run a fifth car. I know there have been those conversations. There’s endless possibilities though, because nothing’s been finalized. That’s the point I’m trying to get across.

“I don’t know what goes into Michael’s decision process, although obviously there are financial, sponsor and political considerations. But he has not let us know what engines he’ll be running next year. He’s told us we’ll know by the end of the season – but obviously that’s coming up very quick.”

On the subject of whether he will definitely stay with Andretti should it remain a Honda team, Rossi replied: “If this had been decided back in May, then there wouldn’t be any question about staying at Michael’s team. But we’re already quite a way down the road with other teams, and it’s down to my own due diligence to listen to the other team owners and team managers and make a decision based on the information I’ve learned. I’ve gained knowledge of their positive attributes and forthcoming improvements that I’d never have known about had I not picked up the phone.”

How Gateway hit a home run on IndyCar’s return