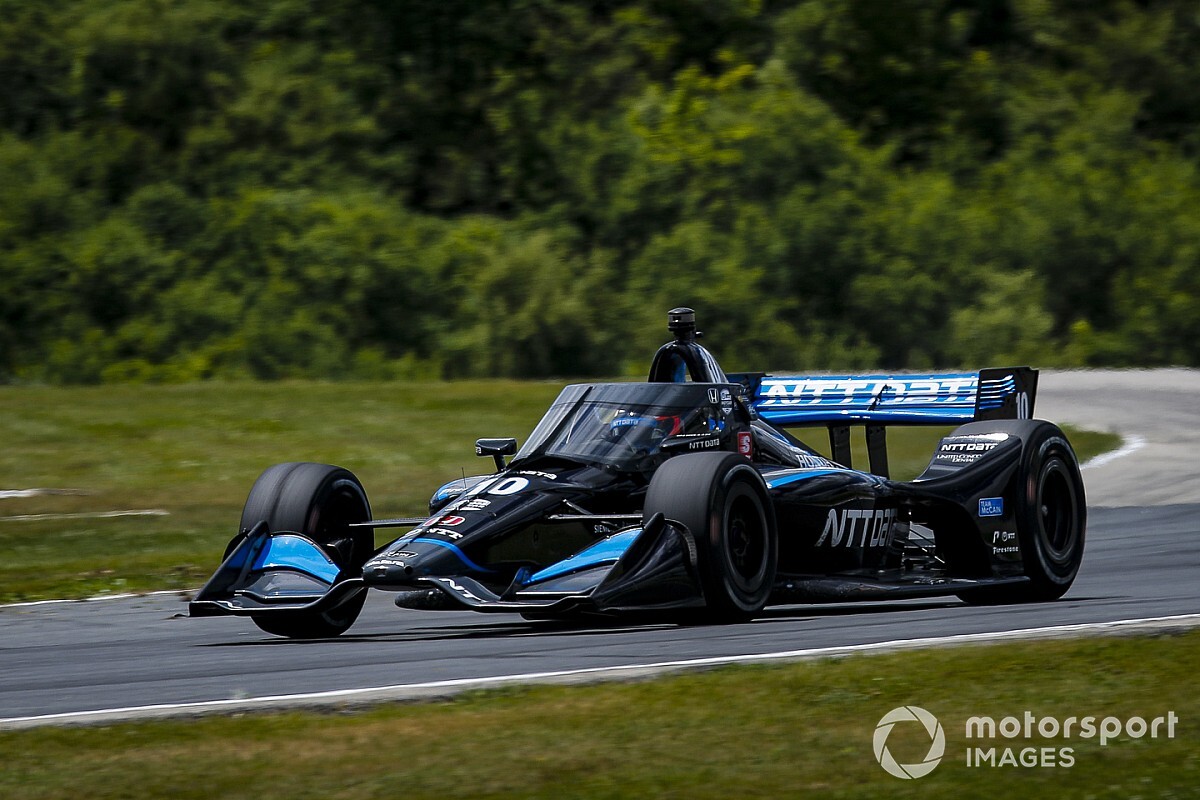 Felix Rosenqvist says that being put into clean air after pit stops was crucial to him exploiting the inherent speed of his Chip Ganassi Racing-Honda and hunting down Pato O’Ward to score his first NTT IndyCar Series win.

Rosenqvist, who dedicated his win to the late John McCain, former CEO of his principal sponsor NTT DATA, said that staying out of dirty air had allowed him to chase the Arrow McLaren SP-Chevrolet of pole-winner and long-time race leader Patricio O’Ward.

“It was one of those races like Mid-Ohio last year where we had to rely on pure pace,” said Rosenqvist who was IndyCar’s Rookie of the Year last season and finished sixth overall in the championship. “We had a lot of free air. I think that was the plan from yesterday. Yesterday we were stuck in traffic most of the race. You can't really do much.

“Today we said we'll try anything to stay out in the clear as much as possible. No matter what tires we have or who's around us, we'll try to do that because we know we have good pace, especially in the race.

“We were really good on the reds. When they said Pato was on the used reds [softer alternate compound Firestones in the final stint], initially I thought that was a good thing with us being on blacks. He seemed to keep the gap pretty well.

“At some point it went away. We started catching him more and more and more. At the same time we had lapped traffic, which this time actually worked in my favor, having been one that always complains about that! That was good.

“I think in that whole sequence, Pato, when he caught the lap traffic, it just tipped over for him, and we started gaining so much with the blacks. At that point I was just focused on getting the win.

“Having the start we had to the season, I had to get this one. We had the pace. We had push-to-pass boost left. I kind of blew it all in one go there to get Pato. That was the second-to-last lap.

“Real good fight with him. I haven't seen the replay, but I'm sure everyone loved that. Yeah, good fun.”

Rosenqvist said the previous lopsidedness of the Ganassi results – teammate Scott Dixon winning the first three races of the season – had been an unfair reflection on his own #10 strand of the team. Rosenqvist had been pressuring Dixon in the closing stages of the season opener at Texas Motor Speedway until crashing out, he stalled in pitlane at the GP of Indianapolis after a poor opening lap, and in the first race of the Road America weekend, the car had suffered a broken spark plug.

“These guys are doing just as good of a job as Dixon's guys and now Marcus’ [Ericsson] guys. I think especially in Texas, Indy GP, they did a phenomenal job in the pits. They've been exceptional. In this blistering heat we've had in the last couple of races, standing there with masks, sweating, you can see they're hungry for every race, as hungry as I am.

“It's just been unfortunate the first couple of races… But today everything just came together. It's so nice to take four out of four for the team, with Dixon starting off the way he did. It just shows how good we are especially in the races. Just need to work on qualifying.”

Rosenqvist’s usual race engineer Julian Robertson stayed home for this event, so instead the #10 was run by Dixon’s former race engineer Chris Simmons, who has become competition manager at Ganassi. However, Rosenqvist said that hadn’t fundamentally altered his work methodology.

“About Chris and Julian, I wouldn't say there's really any difference,” he said. “We are very worked-in as a team. Everyone is so tight. Anyone can sort of do anyone's job. I wouldn't say that really felt different in the car or anything. Obviously everyone works a bit differently.”

Rosenqvist was also pointed out that his left-front wheel changer (Josh Junge), who appeared to take longer than his colleagues in servicing the #10, had actually performed well as the car’s wheel mounting points had been damaged. This was a result of Graham Rahal losing control of his car on the exit of Turn 3 on the opening lap after being ushered onto the curb by Will Power.

Although from Rahal’s onboard it appeared as though Rosenqvist had sent the RLL car into the wall, the external view showed that Rahal slid toward the Ganassi machine as he fought for control.

“On Rahal there, he actually bumped me,” said Rosenqvist. “He touched with Power, then kind of ping-ponged into me. Hit my front left really hard. That left some damage.

“Ultimately getting off the wheel in the pit stop was really hard for the guys. That was why we lost time in the pit stops, three or four seconds. That's why we had a hard time catching Pato at the time.

“That just shows even more what a good race we had!”