A look at what IndyCar's rookie class was able to do at St. Pete.

Four rookies took part in the St. Petersburg season opener for the Verizon IndyCar Series and we will take a look at their performance in alphabetical order.

Aleshin wasn’t a huge factor in the race, but in the end was the only rookie to improve his finishing position from where he started. He kept his nose out of trouble and was able to have good pit stops that kept him in the hunt to be the best finishing rookie. I’ll give him a 3/5 rating for the race since he saved his best for last by getting around Juan Pablo Montoya on lap 91 to maintain 12th place to the finish after spending most of the race around 18th-20th places. 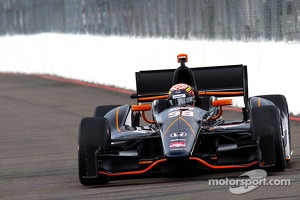 Hawksworth was impressive in the early going of the race. He maintained his own during the early parts of the race but was slowed by a bad first pitstop that dropped him to 15th. He settled in 13th place before the caution that Charlie Kimball brought out, but was unsighted by the first restart and lost control, hitting Marco Andretti and ending both of their races. Although he finished worst of the rookies, he also gets 3/5 for his performance because he was able to get back to the top 10 before his second pitstop and was able to maintain a top 10 position early in the race despite having Ryan Briscoe behind him.

Huertas got as high as 9th before his first pitstop, but did not gain much ground after that. He spent most of the race on the tail end of the lead lap and that is where he ended up in 18th. He had a drive-thru penalty for entering a closed pit, but all and all it was an uneventful race for Dale Coyne Racing’s second driver. He gets a 2/5. 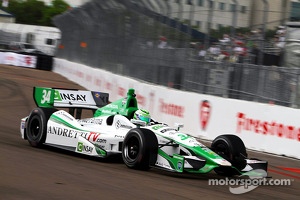 Munoz was fastest in morning warmup, so expectations were high. However, the highest starting rookie could not capitalize on his morning performance. He stayed in the top ten, but after his first pitstop he dropped to around 13th-14th place. His second pitstop dropped him to 16th place and things never improved as he was passed in the last five laps of the race by Mike Conway. Carlos gets 2/5 for this race.