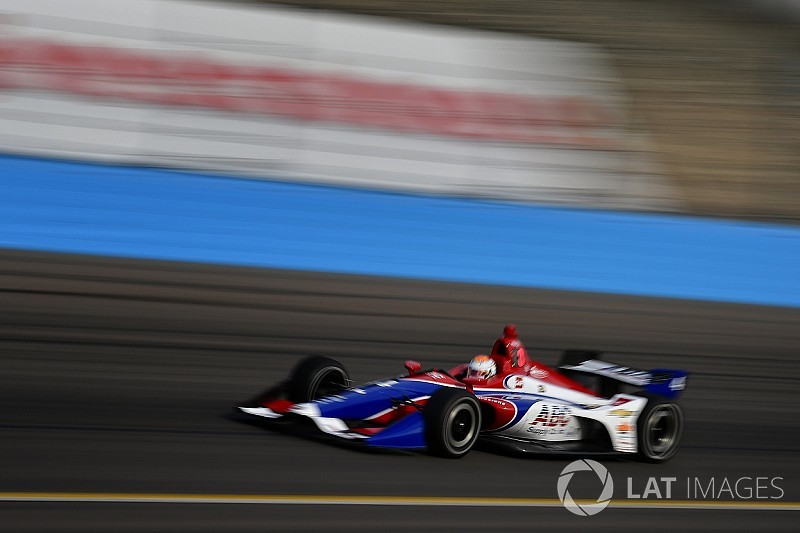 Larry Foyt says AJ Foyt Racing’s 2018 rookie Matheus Leist “has been impressive everywhere,” although his four incidents with the walls at Phoenix’s ISM Raceway have shown how much he still has to learn.

Leist scored three victories in his Indy Lights season with Carlin Racing last year, two of which came on ovals, and he was fastest rookie over three days in Phoenix. But Foyt says the 19-year-old Brazilian still has a lot to learn from the team and from veteran teammate Tony Kanaan.

Foyt told Motorsport.com: “This is our third test with Matheus – Sebring, Sonoma, Phoenix – and honestly, he’s been impressive everywhere. He’d never been to Sonoma, and two runs in, he was very competitive which is great.

“He had some close calls in Phoenix while he learns and the marbles that these tires produce is quite different from what he encountered before in Indy Lights. But he’s learned that now.”

In the course of two days of testing, Leist had a spin without contact at Turn 1, and then also had three brushes with the wall – one at T2, and two more at T4. But like Kanaan, who ended the test third quickest, Leist’s pace was strong and remained in the top half of the field.

“I think considering how fast he’s been, I think he did really well to not let any of his incidents become big hits, just brushes,” said Foyt. “He’s got a lot of talent. I think he can become a big deal in IndyCar.

“But there’s still more to learn – testing is one thing, racing is another, and there’s some things you can only learn by getting out there. TK has been really useful in talking to him, and AJ went over to talk to him when he ran too high, telling him you can’t do that.

“On one of the incidents, Matheus said the car ahead had slowed down so rapidly and he wasn’t ready, and I can see that. Even Tony mentioned that with so much drag removed, the car doesn’t slow down like it used to when you lift. So you’re thinking farther ahead than you used to.

“I mean, it’s pretty hairy out there for all the drivers, even the experienced ones. Phoenix is going to be a tough race for everyone.”

Despite AJ Foyt Racing’s most consistently competitive showing at a full-field test for several years, Foyt said the team were encouraged but not complacent.

“As I say, this is only testing,” he reiterated, “although obviously it’s great to see Tony and Matheus had good pace throughout. But honestly, we still feel like our head’s under water – as I’m sure a lot of teams feel – with the new electronics, new aero package to learn, and so on. It’s just head-down before St. Pete.

“Tony’s doing the tire test at Sebring in a couple of weeks, and Matheus’ next test will be in that [1-month] gap between St. Pete and Phoenix [race]. But there’s still so much work to be done before the first race, it’s hard to see beyond that at the moment.”

IndyCar windscreen "unlikely" to be implemented this year