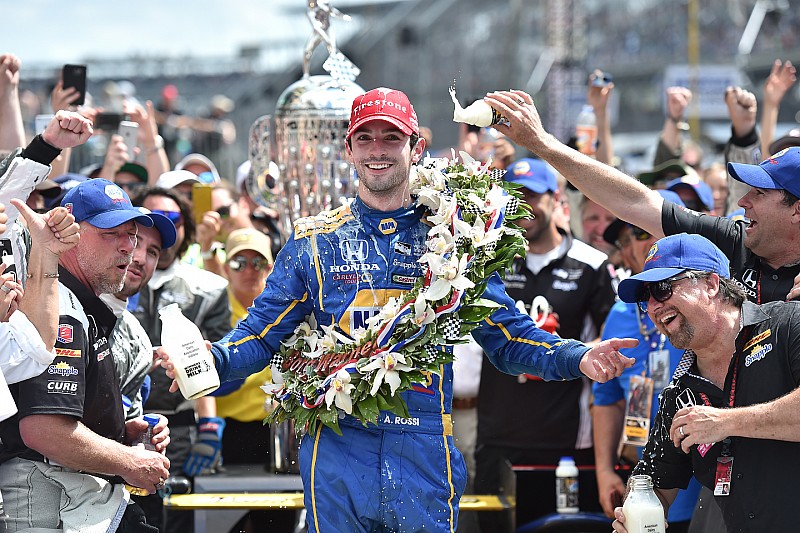 Alexander Rossi won the 100th running of the Indianapolis 500 for Andretti Autosport-Herta at the end of a desperate fuel mileage race, becoming the first rookie to win the race in 15 years.

The pacesetters of the day were forced into ducking into the pits over the final 10 laps, Rossi dropping his pace to as low as 180mph on the final lap to stretch his fuel mileage.

The Californian, who was a late sign-up for the Verizon IndyCar Series season, obeyed his team orders from Bryan Herta, and slowed down soon enough to hold on for victory ahead of teammate Carlos Munoz and Ed Carpenter Racing’s Josef Newgarden by 4.5sec.

It is the first win for a rookie in the Indy 500 since Helio Castroneves won in 2001.

Tony Kanaan was fourth for Chip Ganassi Racing, just ahead of teammate Charlie Kimball who, like Rossi, made his final fuel stop 36 laps before the end. Newgarden’s ECR teammate J.R. Hildebrand was sixth.

From the drop of the green flag, the polesitter, Schmidt Peterson Motorsport’s James Hinchcliffe and Andretti Autosport’s Ryan Hunter-Reay were embroiled in a two-way battle, chased by Newgarden, Andretti’s Townsend Bell, Penske’s Will Power and Munoz.

Over the next 23 laps, Hunter-Reay and Hinchcliffe would swap the lead back and forth, while attention turned to Marco Andretti in eighth (up from 14th on the grid) and Kanaan, up from 18th to ninth, chased by Penske’s Helio Castroneves, Dixon (Ganassi), Rossi, the slow-starting Penske of Pagenaud, SPM’s third car driven by Servia, and Hildebrand.

On lap 8, Kanaan passed Andretti for eighth and two laps later he was into seventh ahead of Munoz. Also making big moves at this stage was Pagenaud who was back into the top 10 on lap 12.

Two laps later, Aleshin passed Power for fifth, triggering a gradual slide down to 11th for the 2014 IndyCar champion, while Pagenaud was firmly heading in the opposite direction and passed him for sixth on lap 17. Five laps later, Pagenaud towed up onto the tail of his former Schmidt Peterson teammate Aleshin to take fifth place.

Finally someone - Newgarden – broke up the Hinchcliffe/Hunter-Reay battle and moved into second ahead of Hinchcliffe, as Pagenaud started to pressure Bell for fourth.

The first round of pitstops was started on Lap 27 by Hinchcliffe and Hunter-Reay, and the following lap, Kanaan was followed pitward by Newgarden, Pagenaud and Bell. That left Munoz in front with Power second on lap 31.

When they pitted too, Sage Karam (DRR/Kingdom Racing) took the lead while Dixon, despite complaining of a loose car, still made it to lap 31 before stopping. Karam and Penske’s defending race-winner Juan Pablo Montoya pitted on lap 32.

Following that first round of pitstops, Hunter-Reay led Bell, Newgarden, Pagenaud, Munoz, Hinchcliffe, Aleshin, Kanaan, Power and Castroneves, Hinch’s drop accounted for by a slow pitstop as his fuelhose failed to disconnect cleanly.

By lap 38, Hunter-Reay had put the lapped Dale Coyne Racing car of Bryan Clauson and a gap of 1.4sec between himself and Bell, before Bell finally passed the DCR car on lap 40 and drafted past RHR on lap 42.

The first yellow of the race flew on lap 47, as debris was spotted on the back straight, and the entire field pitted. Hunter-Reay regained the lead ahead of Pagenaud, Bell, Newgarden, Hinchcliffe, Munoz, Castroneves, Kanaan, Power and Aleshin.

But Power was released into Kanaan’s path and squeezed the Ganassi #10 against the pit wall. After receiving a stop-and-hold penalty, Power’s crew also topped him with fuel. He would resume 32nd and last.

The lap 55 restart saw Hunter-Reay make a fine go of it, but Newgarden dived past Pagenaud, startled him into relinquishing second and Hinchcliffe swiftly took advantage.

Meanwhile Kanaan’s car had apparently been unaffected by the collision as he moved forward on the restart so the order by Lap 60 was Hunter-Reay, Hinchcliffe, Bell, Newgarden, Munoz, Kanaan, Castroneves, Aleshin and Pagenaud who had tumbled to ninth.

On lap 64 came the first major incident of the day, as the rear of Montoya’s car slid wide early in Turn 2 and sent the car slamming into the wall on the exit. The defending Indy 500 race-winner stepped out apparently unharmed, and the shunt appeared not to catch out anyone else.

All those on the lead lap pitted on lap 67 – all those except Power, who had been topped off in the pit stop, and now led Hinchclfife, Hunter-Reay, Castroneves, Bell, Newgarden, Munoz, Kanaan, Aleshin, Pagenaud, Dixon, Karam, Andretti, Hildebrand and Rahal.

However, another unsafe release penalty for a Penske car – Pagenaud’s into the path of Aleshin – dropped the Frenchman to 30th.

The lap 72 restart was waved off as spotters reported some rain sprinkles, but on lap 76, the field took the green again, with Hinchcliffe immediately moving past Power around the outside of Turn 1, and Hunter-Reay passing the #12 Penske into Turn 3 as Bell, Newgarden swiftly followed suit.

On lap 79-80, Castroneves passed both Kanaan and Power, and the following lap the three-time Indy winner moved past Newgarden for fourth for just one lap, as Kanaan passed Power for sixth.

Then Helio charged again, to repass Newgarden, take Bell for third, and five laps later Hunter-Reay and Hinchcliffe. The Canadian repaid him at the same place on the following lap to resume the lead.

The out-of-sequence Power pitted on lap 91 re-emerging into the top four, albeit a lap down, but almost immediately, the full-course caution flew again when Bell made contact with a charging Karam at Turn 1 and the youngster crashed into the outside wall.

Everyone then stopped except Power who got his lap back, and Clauson who led two laps under yellow before pitting.

On lap 105, the green waved again and while Hunter-Reay passed Castroneves, Kanaan shot up to third around the outside, chased by Hinchcliffe and Newgarden, with Kanaan gaining another slot the following lap as he demoted Castroneves.

Bell hit the front on lap 113, chased by Hunter-Reay, Hinch, Castroneves, Andretti and Newgarden as Kanaan fell to seventh ahead of Munoz, Hildebrand and Dixon.

Then on lap 115, Aleshin spun out of Turn 2 and Daly spun in sympathy, banging the rear of his DCR car against the spinning SPM and his nose against the outside wall, bringing out the fourth full-course yellow.

Fracas in the pits

On lap 117, the pits opened and life turned upside down for Andretti Autosport as their two swiftest runners came to grief. Bell was sent out of his pitbox and shot wide to get around Hunter-Reay but bounced off Castroneves and into Hunter-Reay who was just pulling away.

Cars #29 and #28 suffered elongated pitstops that dropped them to the back of the field, 25th and 26th, and Bell then lost a further lap serving a drive-through penalty.

Racing resumed with AJ Foyt Racing’s Alex Tagliani heading Rossi, Castroneves, Hinchcliffe, Kanaan, Andretti, Newgarden, Munoz, Rahal, Dixon and Sato. Rossi immediately jumped around his namesake and into the lead, with Hinchcliffe, Castroneves, Kanaan, Andretti chasing them down, yet on lap 124, Tagliani did a pass in the grass to regain the lead.

Four laps later, Rossi was back to the front, as Dixon got around Rahal for ninth and then eighth after passing Sato. Rossi, meanwhile, was getting towed out of reach of everyone else by the quick but lapped car of Bell, as Tagliani fought hard to keep Kanaan, Hinchcliffe, Castroneves and Newgarden behind him.

Soon after, Andretti was tumbling down the order from 6th to 21st, complaining of his front tire pressures, while Tagliani pitted on lap 136.  Andretti followed suit quickly, with Rossi also pitting.

That allowed Castroneves to retake the lead ahead of Kanaan, Hinchcliffe, Munoz, Newgarden, Dixon, Sato, Rahal, Bourdais, Kimball filling the Top 10. Munoz then moved past Hinch and Newgarden into third, while Sato repasssed Dixon for sixth, ahead of Rahal, Bourdais and Hildebrand.

Helio taken out of contention

With the race three-quarters done, Kanaan, Castroneves, Newgarden and Hinchcliffe had just pitted as the yellow flew for Lazier losing a left-front wheel as he exited the pits.

Max Chilton (Ganassi), Rahal, Bell, Pagenaud and Clauson were sent to the back for having to pit under yellow. The pits opened on lap 153, sending everyone else to the pits.

For the restart on lap 158, the top 15 read Castroneves, Kanaan, Newgarden, Hinchcliffe, Bourdais, Hildebrand, Power, Rossi, Munoz, Sato, Dixon, Pagenaud, Rahal, Chilton, Chaves. But when the green flew again, Kanaan and Newgarden immediately went to the front, and ran two-wide for two corners, before Kanaan got in front. Newgarden returned to P1 before Kanaan got him back, towing Hinchcliffe with him.

Frantic action behind these three saw JR Hildebrand catapult his way into the top six, but snagged his right-front wing against Castroneves’ left-rear wheelguard and broke it, necessitating a stop for the #3 Penske.

A pit stop to repair that damage seemed likely to be expensive at such a late point in the race, but that problem was solved by Sato slipping high out of Turn 4 and into the wall.

That sent the majority of the field scurrying to the pits, and allowed Castroneves to emerge still on the lead lap, albeit at the tail of the field.

But few figured the cars could make it to the end on 36 laps. For the new leaders Hildebrand and Tagliani, it wasn’t even an option, so they were at liberty to go flat out from the restart on lap 167.

Yet Kanaan took just a lap to pass them and move into the lead, and Newgarden, Hinchcliffe, and Dixon demoted Hildebrand to fifth, with Munoz, Rossi, Tagliani, Kimball and Power right behind.

Hildebrand and Munoz re-passed Dixon for fifth, while seven laps later, Newgarden drafted past Kanaan and into the lead. The Brazilian retook P1 four laps later, as Munoz passed Hinchcliffe for fourth a lap later.

Hildebrand pitted and rejoined right in front of teammate Newgarden on lap 186, as Munoz caught and passed first Kanaan and then Newgarden with 10 laps to go.

Yet the fast drivers opted for the splash-and-dash, and despite setting 218-220mph laps as Rossi slowed to 200 or less, the hares were beaten by smart strategy and an obedient driver.

Newgarden: "It just sucks that we didn't have a shootout"