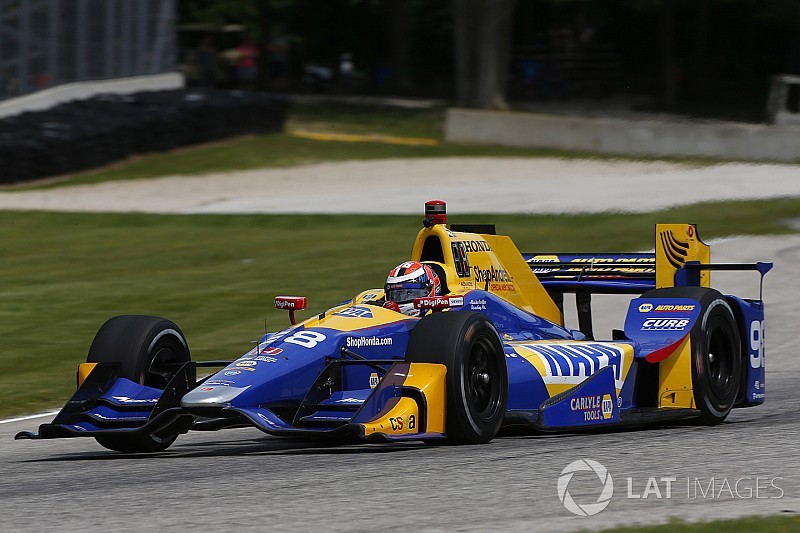 Alexander Rossi put Andretti Autosport-Honda at the top of the times in opening practice at Road America as teammate Ryan Hunter-Reay effectively ended the session five minutes early with a spin into the gravel.

That put the 2016 Indy 500 winner almost a quarter second ahead of three Penske-Chevrolets, led by Simon Pagenaud, who was in turn almost two tenths faster than last year’s Road America winner Will Power and Josef Newgarden.

Hunter-Reay was eighth fastest, 0.7sec off Rossi’s best, when the rear stepped out on him into Turn 14 (final turn), and he skittered over the sand trap and bounced off the tire wall with his right-front wheel.

Teammate Marco Andretti and the fourth Penske of Helio Castroneves completed the Top 10.

Esteban Gutierrez, who has been confirmed in the #18 Dale Coyne Racing-Honda for the remainder of the season, ended the session in 19th, 2.3sec off the front, around 1sec behind rookie teammate Ed Jones. But Gutierrez completed only four laps, compared with Jones’ 11.

Another new face was Robert Wickens who is standing in for Mikhail Aleshin, as the Russian was delayed re-entering America following his participation in the Le Mans 24 Hours - although he is now cleared and on his way to Wisconsin.