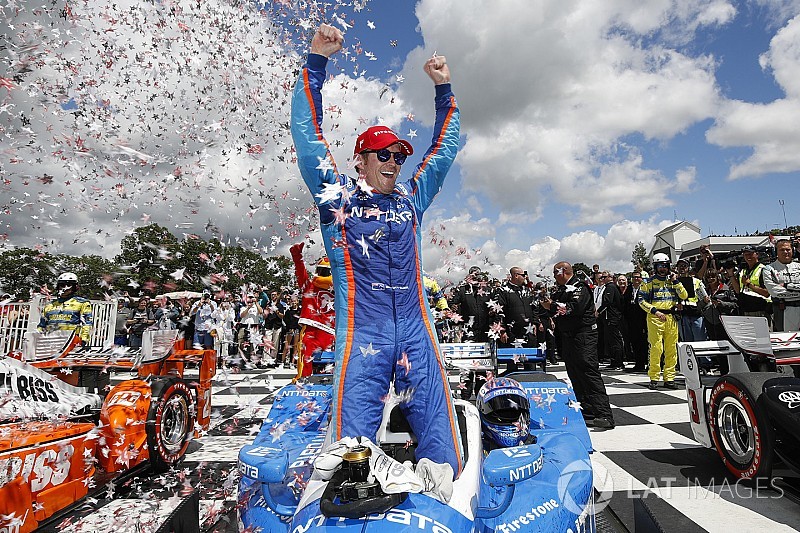 Chip Ganassi Racing-Honda's Scott Dixon held off a charging Josef Newgarden in the closing stages of the Kohler Grand Prix to nail his first win of the season and extend his championship lead.

At the drop of the green, polesitter Helio Castroneves got away cleanly but front-row starter Will Power  bogged down slightly which allowed Penske teammate Josef Newgarden up into second.

Meanwhile, Graham Rahal made a bold start in his Rahal Letterman Lanigan Racing-Honda to run alongside Dixon but the four-time champ elbowed him back to fifth, and Rahal was ordered to give up one position to Simon Pagenaud's Penske, for shoving Dixon onto the grass at Turn 2. Down into Turn 5, Spencer Pigot’s right nose wing broke off on the left-rear of Ryan Hunter-Reay’s Andretti Autosport-Honda.

Chilton passed Rahal for sixth on Lap 4, and Carlos Munoz drafted his AJ Foyt Racing-Chevrolet past Jones on the main straight. Rahal’s day got worse on Lap 5, as Kimball passed him and Hinchcliffe moved onto his tail.

Dixon tried to pass Power around the outside of Turn 5 on Lap 6, but couldn’t make the move stick, while despite starting on blacks, Pagenaud was able to stay in contact with this battle as everyone was into fuel-save mode.

Alexander Rossi and JR Hildebrand appeared to commit to a four-stop strategy by stopping at the end of Lap 6, and the following lap Graham Rahal and Mikhail Aleshin’s Schmidt Peterson Motorsports-Honda followed suit.

At the end of Lap 10, Castroneves led by 2.3sec, Newgarden a similar distance ahead of Power with Dixon 0.7sec further behind, and 2.6 up on Pagenaud who was a second ahead of Chilton.

Munoz pitted on Lap 11 to swap his red sidewalled tires for blacks, promoting Jones and Hunter-Reay into ninth and 10th, and Pigot pulled in his ECR car for new tires and fuel a lap later.

Leader Castroneves ducked into the pits on Lap 13, switching from reds to blacks, and Power followed him in. Castroneves narrowly missed Chilton as he emerged from his pitbox. Power re-emerged and had a wheel-banging battle with Rossi, in which the 2016 Indy 500 winner eventually prevailed.

Newgarden pitted a lap later and emerged ahead of Castroneves but on cold tires he couldn’t hold off his veteran teammate, while Dixon was able to jump Power and had to immediately start defending from Rossi, which he succeeded in doing.

Power on blacks was now struggling to hold off Pagenaud on reds, and on the run down from Turn 3 to 5, he moved to defend from his teammate and was ordered by Race Control to relinquish the place.

At Lap 17, Castroneves led Newgarden by one second, with Dixon 2.8sec behind and Rossi a further 1.4sec adrift and struggling to hold off Pagenaud. Rossi pitted again on Lap 18, moving Pagenaud into fourth and Power fifth.

Up front, their Penske teammates were battling hard now as Newgarden laid down his fastest lap of the race, and at the start of Lap 20, he passed Castroneves around the outside of Turn 1 to hit the front and immediately pulled a 1.5sec gap. At the same time, Rahal and Kanaan made their second stops.

Dixon started hunting down Castroneves and by Lap 21 the Kiwi had the gap under one second, with Pagenaud a similar distance behind the Ganassi car. Dixon looked at making a move on Castroneves at Turn 5 on Lap 24, but Helio hogged the road to keep the Ganassi driver behind and on Lap 25 he ran 3sec behind Newgarden. Dixon was also having to keep an eye on his mirrors as Pagenaud loomed menacingly.

Castroneves, Pagenaud and Power all stopped on Lap 27, Chilton, Hinchcliffe, Hunter-Reay, Jones, teammate Esteban Gutierrez and Andretti's Takuma Sato did likewise. Newgarden and Dixon did the same a lap later and Dixon got out ahead of Castroneves. It was fortunate timing, as Sato was off and stalled at Turn 11, exiting the Kink, bringing out the full-course caution. The four-stoppers chose this moment to duck into the pits – Rossi, Kanaan, Pigot, Rahal, Hildebrand, Aleshin, Daly. Pigot’s car stopped in the pits, however. With Sato’s car bump-started and returned to the pits.

The restart saw Newgarden (blacks) leading Dixon (red), Castroneves (reds), Pagenaud (blacks), Kimball (reds). Dixon used the extra grip of the reds, to hang on around the outside of Newgarden and grab the lead, and into Turn 5, Castroneves demoted his teammate too. Chilton had jumped Power on the restart, but when Hinchcliffe tried to do the same into Turn 3, he made contact with the Penske and dropped off the course and pitted with suspected left-front suspension damage.

Dixon immediately started stretching his advantage, 2.6sec ahead of Castroneves on Lap 32, as Kimball and Chilton tried to keep up with Pagenaud and ahead of Power, both of whom were on the harder black tires. Newgarden, also on blacks, was doing a good job to remain just a second from the red-shod Castroneves.

Munoz pitted from eighth on Lap 36 and took on reds, emerging in 17th.

Dixon’s lead crept over the 4sec mark on Lap 39, with a blanket of two seconds covering Castroneves, Newgarden and Pagenaud, with Kimball, Chilton and Power running 6sec further back. Power passed Chilton on Lap 39 and closed up on Kimball, to no avail. Hunter-Reay would soon demote Chilton too.

Castroneves pitted from second on Lap 41 and took on fresh red tires, and Dixon peeled off into the long pitlane along with Newgarden, Pagenaud, and Power. Castroneves’ early stop didn’t quite work for him, and he couldn’t pass Newgarden and make it stick. Kimball, who led a lap, was last to pit but that didn’t work for him either, as he emerged behind Power.

Following the pitstops, Dixon led by 1.7sec, with the four Penskes next, although Power was five seconds off the back of Pagenaud, who was desperately trying to pass Castroneves. There would be a major reset on Lap 45, however, as Kanaan came off the Carousel with enough momentum to pass Rossi who was struggling with a broken front wing. The left-front wing of Kanaan's car broke on the right-rear bumper pod of Rossi's car. Suddenly shorn of front-end bite at a crucial turn-in moment, Kanaan understeered hard into the barrier.

The four laps under yellow alleviated any fuel worries, which meant Dixon would have to hold off four Penske cars. Behind Power ran Kimball, Hunter-Reay, Rossi, Jones (carrying debris on his front wing), Chilton, Rahal and JR Hildebrand who had been battling hard for half the race.

The restart was clean, although Rossi got shoved off the road at the Kink and dropped to 12th. Kanaan might regard that as a little bit of karma. Hunter-Reay was up to seventh behind Kimball, with Jones, Rahal, Chilton and Aleshin next up.

Over the closing laps, Newgarden was the only Penske driver able to keep up with Dixon, but he couldn’t get close enough to make a serious lunge and he crossed the line 0.5779sec behind the Ganassi driver who scored his 41st IndyCar win, and his and the team's first of the season. It was also a perfect result for Ganassi team director and Dixon strategist, Mike Hull, who this weekend was celebrating his 25th anniversary with CGR.

Castroneves kept Pagenaud and Power bottled up behind him to grab the final podium spot, but Helio after the race had to be treated for severe dehydration.

Kimball easily held onto sixth ahead of Jones, Rahal, Chilton and Aleshin completing the Top 10.

Hunter-Reay lost his front wing against Kimball’s car in the final desperate laps, and as the parts flew away, he dropped to 14th.

Dixon is now 34 points ahead of Pagenaud in the championship hunt.