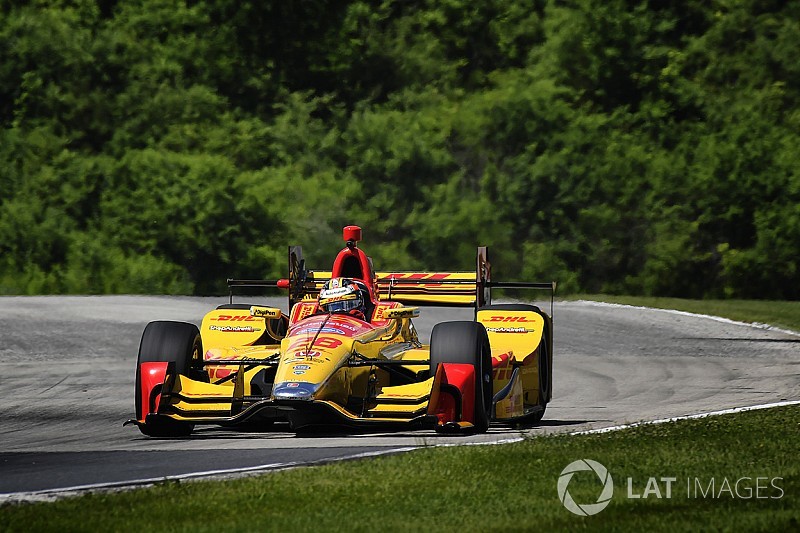 Andretti Autosport-Honda’s Ryan Hunter-Reay recovered from a disappointing qualifying session to head the 30min warm-up session at Road America ahead of this afternoon’s Kohler Grand Prix.

Hunter-Reay, who will start 12th, lapped the 4.014-mile course in 1min43.7956sec to go 0.24sec clear of Chip Ganassi Racing-Honda’s lead driver Max Chilton, but each of them had a teammate who missed the session altogether.

Fifth-place qualifier Scott Dixon failed to hit the track as the #9 Ganassi crew tried to fix a troublesome fuel pump, while Andretti’s Indy 500 winner Takuma Sato is feeling ill and has a sore neck, and thus preserved his energy by sitting out the session.

Carlos Munoz, who all weekend has looked reasonably strong by AJ Foyt Racing-Chevy’s recent standards, was fifth fastest, a few hundreths ahead of Marco Andretti and Ganassi’s Charlie Kimball.

Mikhail Aleshin twice went off at Turn 5 and finished 17th of the 19 drivers who took part in the session, while Esteban Gutierrez finished a tenth ahead of Dale Coyne Racing-Honda teammate Ed Jones.

Rahal hoping tire tactics give him a chance against Penske