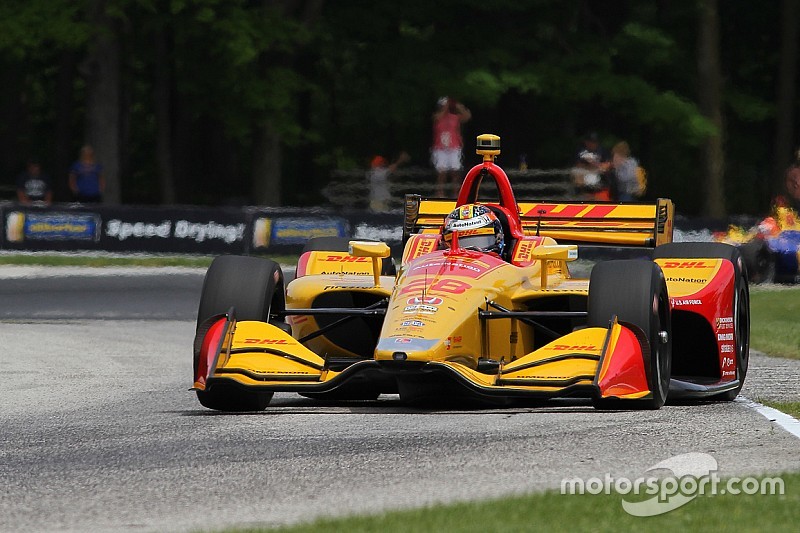 The first came after 20mins when the Michael Shank Racing with Arrow SPM-Honda ground to a halt at Turn 12 with an electrical problem, just before Zach Veach of Andrettti Autosport-Honda went top until his time was deleted.

After the issue was resolved and he served his five-minute penalty for causing the red, Harvey appeared to suffer a stuck throttle at the same spot, skated over the gravel trap and nosed into the tires.

The original red foreshortened the original 30-minute period when the drivers were allowed to use the Push to Pass boost which delivers 50-60hp as the turbos are upped from 1.5-bar to 1.65-bar in a maximum of 20sec bursts.

Andretti’s Alexander Rossi, who has finished three of the last four races staring at a Penske rear wing, was just behind his nemeses in sixth, but ahead of the other Penske of Indy 500 winner Simon Pagenaud, while Spencer Pigot of Ed Carpenter Racing-Chevy was eighth.

The surprise of the session was Tony Kanaan who was 12th for AJ Foyt Racing, less than one second off the ultimate pace, and ahead of Patricio O’Ward in the lead Carlin Racing-Chevy. His teammate, Max Chilton, turned only four very slow laps.