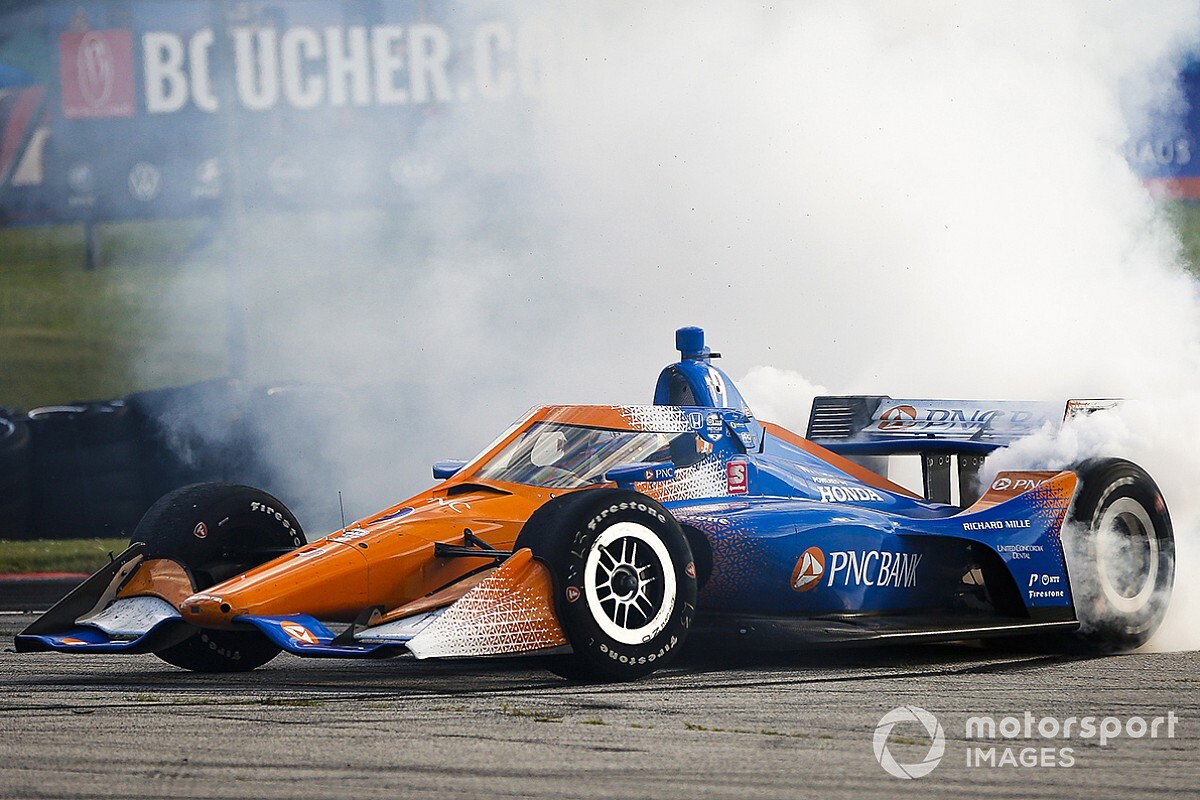 Chip Ganassi Racing’s Scott Dixon earned his 49th IndyCar victory just a week after his 48th, beating Will Power and highly impressive rookie Alex Palou to the checkered flag in the first of the NTT IndyCar Series’ races on this double-header weekend at Road America.

Polesitter Josef Newgarden made a strong start, but so too did Ryan Hunter-Reay from the second row, and immediately the Andretti Autosport driver drew level with slow-starting front-row man Jack Harvey of Meyer Shank Racing. RHR was thus in prime position to threaten Newgarden all the way down to Turn 5 where he just failed to pull off an outside pass.

Behind, Graham Rahal held down third for Rahal Letterman Lanigan, but Penske’s Will Power, wrong-footed by the tardy Harvey, was vulnerable to Santino Ferrucci’s Dale Coyne Racing with Vasser Sullivan machine sweeping around his outside at Turn 1 and the resultant slight contact sent Power down to eighth, behind Harvey, Dixon (Chip Ganassi Racing-Honda), and Colton Herta (Andretti Harding Steinbrenner Racing).

An off course excursion by Alexander Rossi down at Turn 13 saw the Andretti Autosport driver collect an advertising banner, as did teammate Marco Andretti. Both pitted but Andretti had salt thrown in the wound by serving a drive-through penalty for speeding.

Having initially put the pressure on Newgarden, Hunter-Reay fell back into the clutches of Rahal and on Lap 8 of the 55, the RLL machine outbraked the AA car, Hunter-Reay compounding his loss by running wide and coming under pressure from Ferrucci. Further back, Power had fallen off the pace, not only conceding positions to Felix Rosenqvist’s Ganassi machine and Palou’s Dale Coyne Racing with Team Goh entry, but then coming under pressure from Arrow McLaren SP-Chevrolet’s Patricio O’Ward.

Having passed Hunter-Reay, Rahal set his fastest lap but Newgarden steadied his lead at two seconds. On Lap 11, Ferrucci dummied to pass Hunter-Reay into Turn 5, Hunter-Reay covered, thought he had the situation under control and Ferrucci dived back under him to grab third in a very clever move.

That left Hunter-Reay looking vulnerable to Harvey, Dixon and the dueling Herta and Rosenqvist as the scheduled pitstops started on Lap 13, Power and Simon Pagenaud pitting first. Teammate and race leader Newgarden stopped a lap later, while Rahal went a lap longer, only for the refueling to go wrong. He would resume in 11th.

Earlier stops – combined with strong in and out laps – was the best way to go. Newgarden was now nine seconds in front of Ferrucci, but up to third had come Power and the highly impressive rookie Palou. Two seconds behind ran Hunter-Reay, Harvey, Dixon, Herta, Rosenqvist and O’Ward, all of these now on the harder primary Firestones. Highest placed alternate-tired driver was Simon Pagenaud, who had started the race on primaries and now ran 12th.

Ferrucci started chipping away at Newgarden’s lead, but again the Penske champion responded to his nearest pursuer. Towards the end of this second stint, Power started pulling away from Palou who was seeing Hunter-Reay, Harvey and Dixon getting ever larger in his mirrors. That was until Dixon pitted at the end of Lap 25 to take on a new set of primaries.

Palou, Herta, Rosenqvist, and Pagenaud stopped next time by, but Palou’s stop was not great and Dixon blew by easily. Palou’s problems were put into perspective on the following lap, however when Newgarden stalled twice as he tried to leave his pitbox. He finally emerged in 11th.

Having pitted immediately behind Newgarden, Power had ducked out without problem and now in front of Ferrucci. Dixon’s early stop undercut saw him jump Ferrucci and almost Power too, but Power on cold tires was not ceding the position and he protected the inside ferociously at Turns 5 and 6 with some scary-late braking. This was now the battle for the lead, as Marcus Ericsson pitted for a new set of alternates.

Power pulled out 1.7sec and initially Dixon had to focus on fending off Ferrucci, but by Lap 34, Power’s lead was under 1sec and Dixon was 2.7sec ahead of Ferrucci, who held the same margin over Hunter-Reay. Harvey, Palou, Herta, Rahal, Pagenaud and Newgarden completed the Top 10. Newgarden deposed Pagenaud at the start of Lap 38 going into Turn 1, but then the full-course yellows flew – Harvey had suffered a brake failure and went straight on and into the gravel on the outside of the downhill Turn 3.

Once the pits opened, everyone piled into the pitlane, but there was problems on the right-rear wheel for Power, who was beaten out of the pits by Dixon. Ferrucci was even unluckier, being released just as Dalton Kellett pulled his AJ Foyt Racing-Chevy across his nose, and forced Ferrucci into avoiding action.

Thus the restart would be taken in the order Dixon, Power, Hunter-Reay, Palou, Herta, the recovering Newgarden, Ferrucci, Rahal, Pagenaud and Ericsson. Sadly Rosenqvist pulled in with mechanical issues, and just as the field was about to go to green, Andretti’s car stopped on track, driver reporting no power.

At the restart, Dixon held off Power, while Newgarden outbraked himself trying to hold off Ferrucci and ran wide at Turn 1, allowing not only Ferrucci but also Rahal ahead. But at Turn 7, Daly and O’Ward made contact that sent Daly’s Ed Carpenter Racing-Chevy spinning hard into the outside wall, leaving Conor with a sore shoulder. That gave Newgarden the opportunity to stop again to replace his flat-spotted tires.

The next restart, with 11 laps to go, saw Power spin up his rear wheels so he wasn’t able to challenge Dixon, while behind him Palou pulled a brave pass on Hunter-Reay, despite the Andretti Autosport driver squeezing the inside hard enough to leave the Coyne car running half a tire width on the grass. Hunter-Reay tried to respond into Turn 5, but Palou forced him to go to the outside line and retained third. However, Kellett had spun off, bringing out yet another yellow, and positions reverted to the previous timing line – therefore, Palou had to cede third to Hunter-Reay.

With eight laps to go, the green dropped once more and Dixon got it right, leaving Power behind. This time Palou passed Hunter-Reay around the outside of Turn 1 to grab third and latch onto Power. Hunter-Reay stayed clear of Herta, Ferrucci, Rahal and Ericsson. O’Ward and Pagenaud, running in ninth and tenth, dueled hard enough that the Penske driver was forced wide at Turn 5, and lost out to Takuma Sato’s RLL car and Charlie Kimball in the Foyt car.

Rossi’s terrible race – terrible season, so far – was capped by a flat left-front tire on Lap 52, sending him to the pits.

On the 55th and final lap, Ericsson passed Rahal for seventh, but at Canada Corner, he spun himself down to tenth, allowing not only Rahal but O’Ward and Sato ahead.

At the front there were no mistakes from the Ganassi leader, and Dixon crossed the finish line 2.5sec ahead of Power who was just 0.6 ahead of Palou. Hunter-Reay claimed fourth ahead of Herta, Ferrucci, the unfortunate Rahal, O’Ward, Sato and Ericsson.