Rahal returns to TMS after near victory in 2012

Jakes aims to continue the momentum from a career-best weekend.

The Firestone 550 will mark the 11th event for Rahal Letterman Lanigan Racing (RLL) at the 1.5-mile Texas Motor Speedway oval. The team’s highest start of pole with Scott Sharp came in 2007 and highest finish of second came in 2005 with Vitor Meira. The team earned another front row start in 2004 when Buddy Rice qualified second. Overall the team has earned three top-five finishes and six top-10’s at the track. 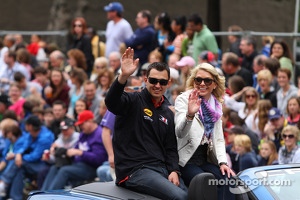 The No. 15 Midas / Big O Tires entry for Graham Rahal and the No. 16 Acorn Stairlifts entry for James Jakes will bring that total to 19 in 2013. Last year at TMS, Sato earned his best qualifying position of the season to date of 10th but was assessed a 10-grid penalty for an unapproved engine change and started 20th. He moved up to sixth but contact on Lap 63/228 resulted in a 22nd place finish.

The 2013 race will mark Graham Rahal’s fifth event here. He qualified third in 2012, led 27 laps and looked close to earning his second series victory but a slight brush of the wall with two laps to go forced him to settle for second place with Service Central Chip Ganassi Racing (SCCGR). He qualified 20th for the first of two heat races in 2011 and finished ninth with SCCGR.

He drew the fourth starting spot for Race 2 in 2011 and finished 30th. He did not compete in Texas in 2010 during his partial season of competition. He qualified 12th with Newman/Haas/Lanigan Racing (NHLR) in 2009 but retired in 22nd place after contact. In 2008, he qualified 18th and finished 11th with NHLR. He is ranked 14th in series standings with 126 points after seven of 19 races.

“I felt great last year. We worked very hard on a good racecar, and would have had the pole if I didn’t hit the hard limiter. I had the fastest lap in qualifying, but unfortunately it’s the average of two. I thought we ran very well in the race at the beginning and end. We faded mid race with some handling issues, but it quickly came back to us. I take last year as a great learning lesson for myself, and I look forward to getting back there this year.”

GRAHAM ON THE OCCASIONAL THOUGHT ABOUT 2012’S NEAR WIN

“I still think about it occasionally. I want to win, and it would have been so nice to get my second that night. But it is what it is, I moved on. A race win this weekend would certainly help!”

JAKES AT TEXAS – SITE OF HIS BEST CAREER OVAL FINISH

The 2013 Firestone 550 at Texas Motor Speedway will be Jakes’ third event here. He qualified 21st in 2012 and earned his highest career oval finish to date of 10th. In the dual race in 2011 he qualified 30th and finished 25th in heat one and drew the 23rd starting spot in Heat 2 and finished 28th.

After earning his highest overall IndyCar Series start and finish of second place at the previous event on Belle Isle, Jakes has his sights set on the top step of the podium. He has had competitive runs since the start of the season although various issues kept him from breaking through until Detroit.

After having a competitive race car at Indianapolis Motor Speedway, Jakes feels that a competitive run at TMS is possible. He is ranked 12th in series standings with 130 points after seven of 19 races.

“Like other places, we have shown good pace there but we haven't been able to put everything together. Hopefully after coming off a good result in Detroit this will give us some momentum for the next few races. Last year was only my second race there and we managed to finish in the top-10 so this year I will be looking to better that. I think we should be in a good position in Texas. I was pretty happy with the car in Indianapolis this year and that should translate over.”

GRAHAM AND JAMES ON THE CHALLENGES OF RACING AT TMS

“Nowadays one of the great challenges is tire management and keeping the car underneath you,” said Rahal. “There is by no means the amount of grip at Texas that there used to be as tires have changed, and the downforce levels of the cars have been greatly reduced. It has become one of the most challenging oval tracks we will run all year.”

“Texas is very fast and also mentally challenging because of the concentration that you need during the race so that you don’t make a mistake,” added Jakes. “Since they maximized the amount of downforce that you can run, the racing has become better and you really have to work on your car setup to make sure it is good for the entire race.”

JAKES ON A DETROIT REWIND


James was quick in the lone practice session in Detroit and went on to earn his best qualifying effort of fourth place on Friday afternoon for Saturday’s Dual which eclipsed his previous best of eighth on the road course at Motegi, Japan. On Saturday morning he improved that mark again with a second place qualifying effort for Sunday’s Dual 2.

The team struggled to extend the performance of the red “alternate” Firestone’s in Saturday’s race and he finished 10th. They worked to improve that in Sunday’s pre-race warm-up and in the late stages of an event-filled Dual 2 race, James drove as hard as he could to create a gap over second place before his final pit stop to come out in second and earn his best series finish.

“Detroit was a great weekend, very exciting for the No. 16 Acorn Stairlifts crew, but I have always thought we should have good place on the road and street courses and it was just a question of putting everything together. I loved the new layout and I’m very much looking forward to going back there next year.”

“On Sunday evening I felt fine, I guess because all my adrenaline was still pumping. Monday morning I was hurting a little, I could have stayed in bed all day. We raced for over four hours at the weekend and with such bumpy conditions it was always going to be very physical. Also the last 30 laps of Dual 2 were like qualifying laps to make sure we created enough of a gap before the pit stop, and this is probably what finished me off because that was hard work.”

“It terms of putting a result on the board, absolutely yes. We have shown on occasion that we have great pace but this was the first weekend where we have been able to put it all together.”

The team tested at TMS on March 27 with Rahal behind the wheel and Jakes on site as an observer. The initial plan was for Jakes to test as well but the cool, windy conditions led the team to decide to save the limited allocation of test miles for later.

“I think the team will certainly be competitive there after our test,” said Rahal. “We found some things I thought would really help us a considerable amount even though the conditions were pretty different. We didn’t have the best of runs at Indy, but we have moved on and are looking forward to challenging for the win in Texas.”

JAKES ON CARRYING MOMENTUM FROM INDY, THROUGH DETROIT AND ON TO TMS

“Yes, absolutely. We had a strong run going for the first part of the race in Indy and it seems to have carried on until now. I think it’s just a combination of everyone jelling together and ironing out the mistakes. I'm very excited about this part of the season and really looking forward to maximizing the potential out of the car to move us up in the championship.”