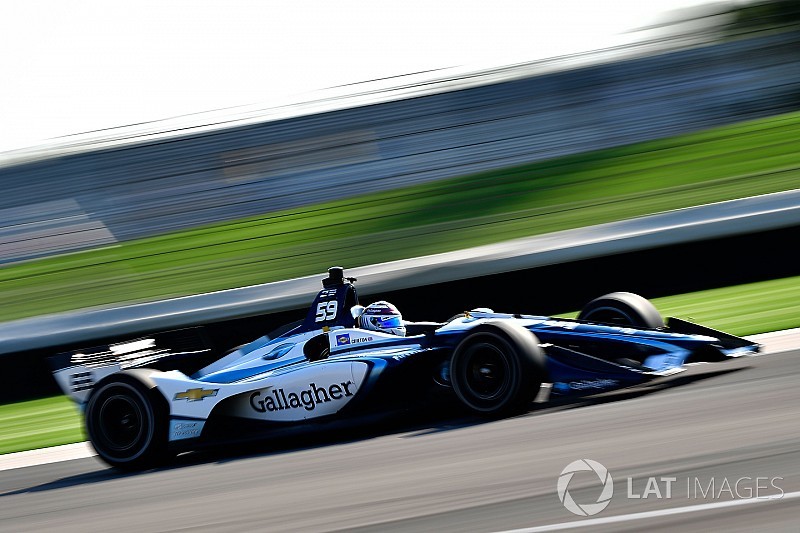 With Carlin Racing regularly contending for Top 10 places in its very first season of IndyCar, Max Chilton tells David Malsher what he hopes to achieve this year and what he feels the team is still missing.

DM: Looking at your pace, rather than hard results, are you literally feeling race-by-race progress right now?

MC: Yes and no. I think we did remarkably well at Indy, considering the team had never been there with IndyCars. We qualified mid-pack which was just amazing considering how strong and close the whole field is. Then we went on to Detroit and we qualified really well there.

First of all, I’ve got to say, I feel like I’m driving the best I’ve ever driven in IndyCar – I learned a lot in the first two years here, and I think I’ve proven in the past that I always do best in my third year in a series – more precise, more confident to go out and attack in every session. I think I’ve outqualified Charlie in eight of the 10 races we’ve had so far – the only two where he beat me were Indy and Texas, and he is more of an oval expert than me. At Road America I was eight-tenths quicker than him because that’s a track that really suits my style. But I started four places lower because of how the two Q1 groups are put together. Bizarre.

But anyway, because of that difference in pace, he went for the four-stop strategy, I went on three-stop and immediately started fuel saving and I was as quick as Charlie who wasn’t fuel saving. So we ended up having a good race, but it was frustrating because as a team overall we didn’t have the speed in qualifying, otherwise I think our performance would have got us a top-10.

So to your question, yes we’re making progress in terms of how we operate, but the IndyCar schedule is so intense that we get very few proper test days. I’m in the car most weeks but because it’s a race weekend. It’s hard to make progress in that timeframe.

We will get there. We have no engineers who’ve done IndyCar before so that’s probably not ideal but the ones we’ve got have done remarkably well. I’m proud of their efforts and the mechanics are working incredibly hard to be where we want to be.

Can you feel which areas you’re missing out on compared with, say, Penske?

Well it depends on each track, but at Road America it was mid-corner grip, mechanical grip. Because at most of these tracks we’ve lost 40 percent of the downforce, we’re all running maximum downforce and the same wing angles. So it’s not an aero thing, it’s a mechanical thing, and some of these teams have damper programs with factory-based crews, whereas we literally have no one factory-based – everyone’s at the track!

So that’s where a lot of time is lost. In a virtually spec series, little improvements can have big consequences, and teams like Penske and Ganassi have the knowledge and understanding of what to learn from in the first year with a new car.

But we’re working hard behind the scenes, and as you know, Trevor is all about winning and he’s used to success so I do think we will get there.

Do you foresee Carlin soon making the expansion in manpower to catch up to Penske?

Well, obviously that’s more of a question for Trevor. It’s a difficult one, but the way I look at it is, you need more backing to get that same strength in numbers, but you’re not going to get more backing until you get results. So until we move higher and get more results, we can’t really expand too much. The thing we all know is that Trevor is the best at starting up new teams, and he always eventually succeeds because he knows exactly what areas need work. He’s the man for the job.

Would you say this car actually suits your driving style or have you just adapted to it?

On the road courses it suits my driving style because I’m quite smooth and controlled. Downforce was quite good at covering up driving style issues. It’s like giving a driver with less experience a softer set of tires than his teammate – it helps cover up a deficiency. But as soon as there’s less grip, like this year, the smoother more precise drivers do better. And I think that’s why I’ve done better this year in road course qualifying than my teammate. But it works the other way on ovals – if you have less downforce, I feel less confident and am hindered by it.

Are you enjoying the sense of responsibility that comes as a result of there being so little IndyCar experience within the team?

Yes, that’s a nice feeling. I worked with Carlin for 10 years and I’ve always felt they take note of my opinion, and I know they’re as desperate to win as any of us, so they will listen to any helpful advice or pointers I can give.

Obviously, Charlie is massively helpful there too. He’s got a lot more experience than me – this is his eighth year in IndyCar – and he also loves to talk. If Charlie’s mouth is closed, you know he’s asleep! I think I speak very precisely but with the minimum of words. Charlie gives a lot more feedback and explains stuff in context from years gone by, session by session, so I think between us we’re good for a new team. And that’s good when you’re up against teams like Penske.

With seven races to go, what results do you think are feasible by the end of the year?

Well, the cool thing about IndyCar is how close everything is, and if you’re an underdog running 14th or something, a yellow and smart pit strategy can massively change your day. Anything is possible. So although we didn’t start where we wanted to in Road America, my lap times were in the top five or six, so if the order had been flipped, I could have stayed near the front.

So we just need to get qualifying nailed – we need to focus on that, because I believe we have the race pace to stay near the front if we start there. I want to get a top 10 or two before the season’s over.

Andretti “cautiously optimistic” for Iowa – and remainder of 2018