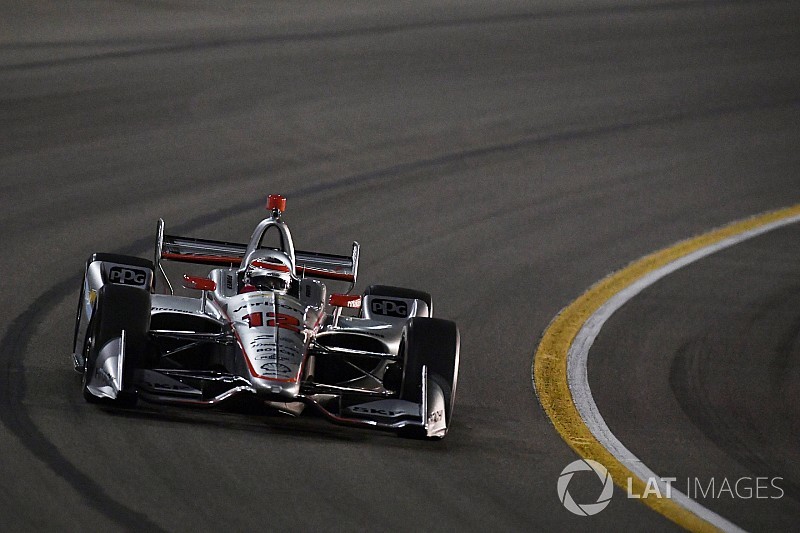 IndyCar should hold a special session on Phoenix’s ISM Raceway in which the field must drive in the second lane in order to enhance racing, says Team Penske’s Will Power.

The ISM Raceway has a reputation for mostly one-lane racing, leading IndyCar to drag tires around the outside lane in an effort to create more racing lines ahead of the 2018 race.

Although Alexander Rossi was able to make a string of over 20 passes for position, drivers such as Power, Ed Jones and rookies Pietro Fittipaldi and Kyle Kaiser collided with the outside wall having gone off the racing line.

The universal aerokit improved the racing going into the final year of IndyCar’s deal with ISMR, but it was enhanced by teams and drivers varying their tire strategies.  Power, who led 80 laps last Saturday, says a more radical solution is needed.

“I think they need to run a session where they say you get a free set of tires before final practice and say you can only run the second lane,” he said. “I think that is the only way you can bring that in.

“It’s a one-groove track. I think IndyCar has done a fantastic job with the car, the turbulence is way less and there probably is a bit more passing now, but it’s tough.

“If you get a little bit up there, you end up in the wall. No one wants to take the risk. But I have to say the car has been really good. I think IndyCar did a great job.”

Andretti's Rossi added that while the circuit needs changing, passing is possible in its current configuration.

“I'd love to see more banking, [make it] wider,” he said. “I think the track is doing what they can. I think the series did a great job. Obviously, our #27 team were a representation if you nail it, you can pass.

“From my side, it was a lot easier to pass cars than last year. I think that's a shout out to [president of competition and operations] Jay Frye, his team in the competition department at IndyCar, for the changes they made.  It's a moving target. It's a very difficult job to come up with aero packages and changes.

“I think St. Pete was the most passes we have ever had at a street course before. I think there's probably quite a few passes here. So that's all steps in the right direction.”

IndyCar and Phoenix are understood to be keen to renew the deal, despite a third year of poor attendance.

Newgarden had no idea if winning pass would work