Power completed two laps Friday around the one-mile oval at an average of 170.212 mph, which will position the No. 12 Verizon Team Penske Dallara/Chevrolet inside the second row for the start of the 250-lap race.

"We had a good Verizon car all day," said Power. "I thought we might have had enough for the pole today, but I made a little mistake on the last lap and we just missed it. Starting third is a good position for us tomorrow." 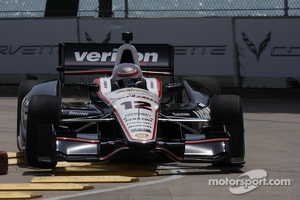 Meanwhile, Helio Castroneves will start 18th on Saturday after recording a two-lap average of 167.169 mph in the No. 3 PPG Automotive Refinish Team Penske Dallara/Chevrolet.

"Wow, that was a tough day of qualifying -- one of the toughest of my career," said Castroneves. "The PPG Team Penske Chevrolet has been good today, but I think we got a little greedy there. We took a gamble on downforce, going really low, thinking the track would be better and it just wasn't."

Castroneves is coming off a victory last weekend in the Firestone 550 at Texas Motor Speedway. He leads the IZOD IndyCar Series championship standings by 22 points entering the ninth race of the 19-race season on Saturday.

Making his debut in the distinctive blue and black PPG Chevy this weekend, Castroneves’ qualifying run was a bit dicey as the car nearly stepped out on the short oval under trimmed-out conditions.

"The car got sideways a couple of times," said the three-time Indy 500 winner. "I'm glad the car came in on all four wheels. We have a lot of work to do tomorrow in the race, but we'll be ready and hopefully we'll fight for our first win at Milwaukee."

With rain a possibility in Milwaukee on Saturday, Power knows that could play a factor in the Milwaukee IndyFest. “We’re not sure what the weather will be – we hope the rain stays away, especially for the fans – but it should be a good race,” said Power.