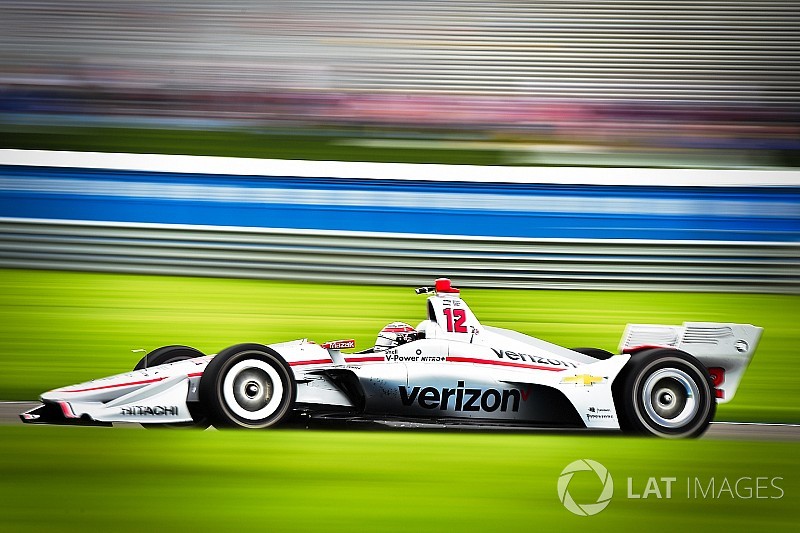 Will Power, who yesterday scored his third IMS road course victory in four years, says “every lap was like qualifying” so he was proud that he drove “absolutely perfect all race”.

Power scored his 33rd Indy car victory – and 30th for Team Penske – as well racking up Roger Penske’s 200th in Indy car competition, but the Australian pointed out that the fuel saving at the end was demanding, as was trying to stay within range of temporary leader Robert Wickens when the rookie was running the faster compound Firestones, and his own Penske-Chevrolet was on primaries.

He explained: “With Wickens using reds [softer, faster alternate compound] in that second stint I was on blacks [primaries]… it was about not letting too much damage be done, so I maintained the gap at five seconds basically, and was able to do a very quick in-lap, so by the time I got out behind him, it was only a three-second gap. Obviously he was on blacks and I was on reds, so I returned the favor and really caught him and had a good race with him down to Turn 1.

“Once I got past him, it was pretty straightforward because we were much quicker and then it went yellow, which made for a very difficult last stint, having to save a lot of fuel, and keeping a gap to [Scott] Dixon so he wouldn't use his Push-to-Pass and attack me.”

Power pointed out that the final stint, going fast enough to retain the lead but saving enough fuel to avoid a late splash-n-dash pitstop had been particularly tough. Coming off the throttle early to eke out fuel mileage means that to maintain good lap times a driver must drive the corners at higher speed.

“Every lap was like qualifying,” he said. “I drove just absolutely perfect all race, just hitting my marks, hitting my brake points and just really extracting the most out of the car… You save fuel but you push like qualifying because you've got to make the time up in the corner as you're saving the fuel. So it's not like it's easier to go fast and save fuel. It's very tough.”

Power also praised his crew for the final pitstop under yellow when almost the whole field stopped, and he was able to emerge just in front of Wickens.

“Yeah, that was the key to the win there, I think, my guys getting me out in front of Wickens with that final stop – just literally a nose ahead! I was very happy about that. And then it was obviously about having a good restart and when to fuel save.”
Although three IndyCar drivers have told Motorsport.com that they believe Honda has superior fuel mileage to the Chevrolets, Power attributed some of his success yesterday to the economy of the Chevy.

“We have noticed that Honda has had some pretty good mileage,” he agreed, “but [the team] gave me the [fuel mileage] number I needed. It was a big number that I had to get. I did my first lap, and I only was halfway there. I'm like, ‘Man, this is going to be tough.’ I leaned out [the fuel mixture] more, which is a power loss, and then I got the number. I was able to get the number every lap and maintain a pretty good pace.

“I really don't know what the difference is [between Chevy and Honda] in fuel mileage. You know, it seemed as though they had better, but Chevy, today…

“That's the thing about Chevy: they're constantly working on it. If there's any deficit anywhere, they find a way to bridge that gap and do it quickly. I love driving with Chevy for that reason.”

Regarding the milestone reached for the team, Power stated: “200 wins in IndyCar just shows Roger's determination and the way his team works and his passion for winning. It's a real pleasure to drive for him. You're given equipment week in, week out, to win. I have to say it's amazing to be a part of that history of Penske Racing because it's such a deep history. I'm so grateful to be able to drive for this team.”

Power, like long-time teammate Castroneves, has now scored 30 wins for Team Penske, one ahead of the legendary Rick Mears.

Dixon: “A team like ours shouldn't be as lost as we were”