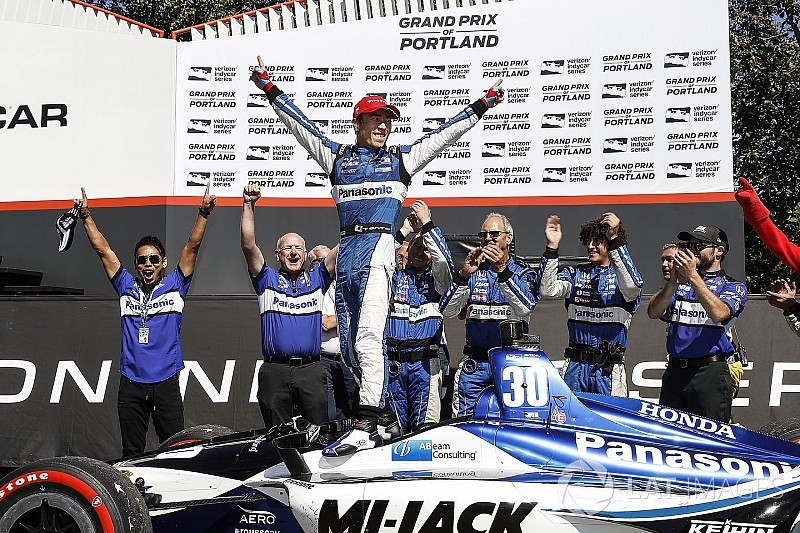 Takuma Sato scored the third IndyCar win of his career after a crazy race at Portland that saw Scott Dixon salvage fifth well ahead of Alexander Rossi despite dropping to the back of the field, and the Penske drivers’ title hopes effectively extinguished.

A very scruffy start saw Will Power pull into the lead well ahead of Josef Newgarden, allowing Rossi down the inside of Newgarden at Turn 1 and Ryan Hunter-Reay around the outside of him at Turn 2.

However, there was carnage exiting Turn 1, as Zach Veach and James Hinchcliffe rubbed wheels at Turn 3, spinning the Schmidt Peterson Motorsports car, and pushing Sebastien Bourdais’ Dale Coyne Racing with Vasser-Sullivan car off into the dirt.

Others who piled into the dusty melee included the Chip Ganassi Racing-Hondas of Ed Jones and championship leader Dixon, Graham Rahal’s Rahal Letterman Lanigan Racing-Honda, and the fourth Andretti car of Marco Andretti which was launched over Hinchcliffe’s car, tumbled and came to rest upside down.

Dixon, blinded by dust initially, got going under his own power and slowed in front of the Ganassi pit on-track to have his car checked over by race engineer Chris Simmons, and was given the all-clear to continue. He was down to 20th. Bourdais was also able to pit and stay on the lead lap, albeit 21st.

The race restarted on Lap 8, this time without incident, but exiting Turn 7 Power abruptly slowed apparently with a gearbox issue, Roger Penske reporting that the car couldn’t use first gear. The #12 Penske fell to 12th. Into Turn 9 the following lap, he went around the outside of Tony Kanaan at Turn 10 and moved into 11th.

Rossi was using his reds well, pulling a 2.3sec lead on Hunter-Reay who was clearly bottling up Newgarden and Veach. Not far behind, King was past Harvey and into fifth.

Dixon was making good progress, as expected, reaching 17th by Lap 15, but not able to find a way around Simon Pagenaud in the third Penske, but gaining a place when Munoz made his first stop. Harvey also pulled in for another set of reds, and on Lap 20 Pigot stopped.

Power was making no progress on passing Gabby Chaves’ Harding Racing-Chevrolet although the stops of those ahead had seen the pair move up to seventh and eighth, 1sec apart, albeit around 18sec behind the leader Rossi.

Harvey, who had stopped earlier, muscled between them and then past Veach, despite Veach’s best efforts to retaliate along the back straight. Next lap, King passed Veach too, in Turn 7.

But on Lap 44, Power slid wide through Turn 11, and went into the tires at Turn 12, rejoining a lap down. He then made a long pitstop, falling eight laps down, his title hopes over.

He wasn’t the only championship contender in trouble. Dixon had stopped the lap after Power – and got nabbed for a pit speed violation, obliging him to serve a drive-through penalty.

Rossi had led by 7.4sec on primary tires as Newgarden passed Hunter-Reay for second just before the full-course caution to rescue Power. Two laps after the restart, Newgarden dived down the inside of Rossi to claim the lead at Turn 1, as behind him King passed Hunter-Reay for third. Indeed, the ECR machine was swiftly on the tail of Rossi, hobbled as he was by primary tires.

Veach clipped the curb and spun out of sixth place at Turn 11 on Lap 56, causing the third full-course yellow of the day. Most of the leaders chose the opportunity to stop, but Hunter-Reay stayed out and took the lead ahead of Sato’s Rahal Letterman Lanigan Racing-Honda, Bourdais, Dixon, Pigot, Pagenaud, Munoz, Dale Coyne pair Santino Ferrucci and Pietro Fittipaldi, and Charlie Kimball (Carlin-Chevy). Newgarden, Rossi and King – all now on reds – emerged 16th through 18th.

Following the Lap 60 restart, a clash between Newgarden and Alfonso Celis Jr at Turn 1 caused the Penske driver to launch over the chicane curbs and allowed Rossi to edge closer.

A brave move from Newgarden on Harvey at Turn 7 was followed by a scarily brave pass on Harvey from Rossi along the back straight, so the pair ran 13th and 14th. When Chilton passed Munoz, the SPM driver lost enough momentum to allow Newgarden into 12th, and Rossi passed Munoz for 13th down the front straight.

Hunter-Reay made his final stop at the end of Lap 71 and took on fresh red tires, allowing Sato into a 2.2sec lead over Bourdais, who was being tracked closely by Dixon and Pigot, with Pagenaud another 2.7sec down.

Dixon stopped at the end of Lap 73, while the rest of the leaders followed suit when Ferrucci’s car came to a halt just off the racing surface on Lap 77.

Chilton’s Carlin-Chevy moved to the front by not stopping with the others, and at the green he would lead Sato, Hunter-Reay, Bourdais, Dixon, Pigot, Pagenaud, Kimball and Fittipaldi. Down in 10th and 11th were Newgarden and Rossi.

The Lap 81 restart was waved off for Chilton departing too early, but the restart proper on Lap 82 was orderly. The significant order change was Pigot exiting Turn 7 better than Dixon and passing him along the back straight. Dixon’s hopes took a further knock at the start of the next lap – Rossi passing Newgarden into Turn 1 to claim ninth.

Chilton surrendered the lead to make his final stop at the end of Lap 85, and Rossi moved past Fittipaldi to claim eighth. He now had only 2sec – and Pagenaud and Kimball – between himself and points leader Dixon.

The battle for the lead between Sato and Hunter-Reay – running 1sec apart – edged 2sec clear of primary-tired Bourdais, in the closing 20 laps, although RHR’s early third stop was limiting him from running full rich fuel.

Rossi could make no impression on Kimball, and it was becoming clear that even were he to pass Kimball and Pagenaud, he wasn’t going to even catch Dixon, let alone pass him.

With three to go, Hunter-Reay started reeling in Sato and they started the final lap half a second apart, but without Sato making an error there was no chance for the Andretti driver, and he passed the checkered flag 0.6084sec behind. It was only the third IndyCar win of Sato’s career after 2013 Grand Prix of Long Beach and the 2017 Indy 500.

Bourdais was a further 1.2sec down in third and 2.7 ahead of fourth-placed Pigot, with Dixon breathing a sigh of relief with fifth place – top of the title contenders. Pagenaud and Kimball remained out of Rossi’s reach, while Fittipaldi kept Newgarden behind him to claim ninth.

The unofficial points are now Dixon on 598, Rossi on 569, and the Penske pair Power and Newgarden all but out of it in joint third on 511 points.