Colton Herta was the only driver to duck under the 58sec barrier in third practice for tomorrow’s Grand Prix of Portland, going a tenth quicker than IndyCar points leader Josef Newgarden.

The Harding Steinbrenner Racing-Honda driver clocked a 57.9939sec lap around the 1.964-mile road course to eclipse the Team Penske-Chevrolet of Newgarden by 0.1083, and Newgarden’s teammate Will Power by 0.1793sec.

Scott Dixon was just 0.0089 further down in P4, with Andretti Autosport-Honda’s Alexander Rossi and Ryan Hunter-Reay claiming fifth and sixth.

Jack Harvey was a highly impressive seventh on his return to the series with Meyer Shank Racing-Honda, while Graham Rahal, Felix Rosenqvist and Sebastien Bourdais completed the top 10.

Conor Daly was less than 0.15sec slower than temporary teammate James Hinchcliffe in the Arrow Schmidt Peterson Motorsport Hondas, and the entire 23-car field was covered by one second.

There were two red flags, both for spin and stalls, from AJ Foyt Racing’s Matheus Leist and Dale Coyne Racing’s Santino Ferrucci, currently lead rookie in the standings.

Following the session, the IndyCar drivers and their crews lined the pitlane, and its AMR Safety Team fanned across the start/finish line, holding a one-minute silent tribute to Anthoine Hubert, the French rising star who perished in a horrific Formula 2 accident at Spa-Francorchamps today.

Qualifying for the Grand Prix of Portland starts at 3pm local (Pacific) time. 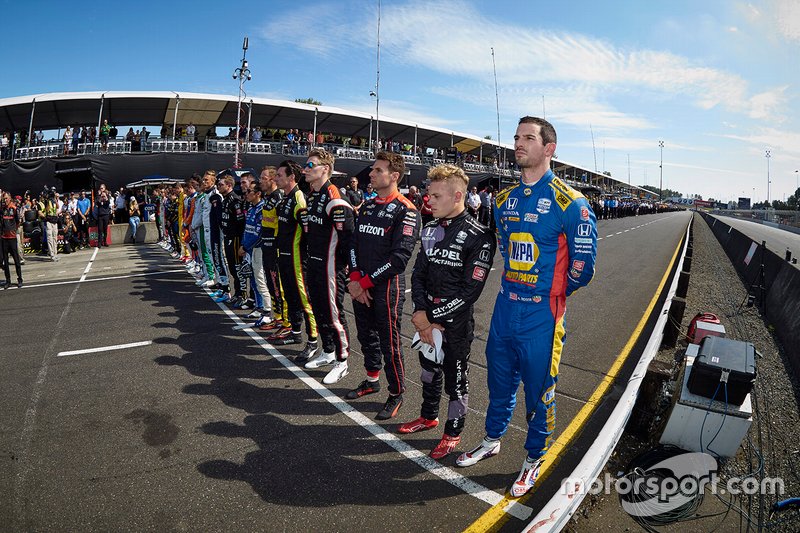