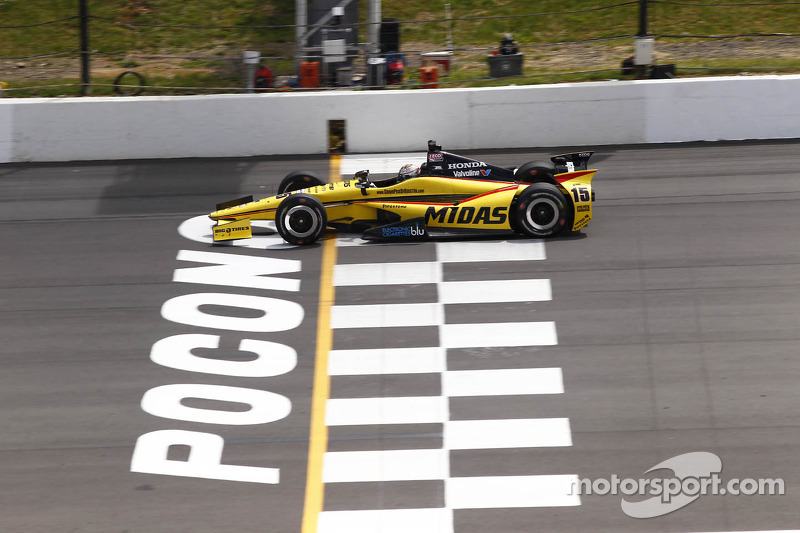 Pocono's 'roval', a unique track and a lesson in open wheel history.

For the first time since 1989, American open-wheel racing comes back to an area of the United States that has become known as racing's Magic Triangle due to the location of Pocono Raceway to the population centers of New York and Philadelphia.

Pocono Raceway is about 90 miles away from both New York and Philadelphia with New York having the distinction of the #1 largest TV market and Philadelphia, the #4 largest TV market. This also places the super-speedway within 200 miles of 60 million people and when you consider that the average NASCAR Sprint Cup fan (the main fan base that have used Pocono Speedway these last 24 years) travels 300 miles, this race track is in the highest population density of almost any other popular racing destination. 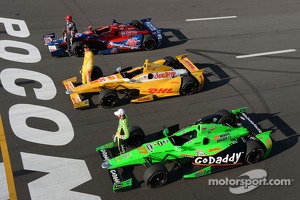 Everyone loves to bring their own analogy to this uniquely shaped racing venue ... being a triangle, people call the 'Tricky Triangle' a tri-oval or 'roval' because of its asymmetric configuration - an oval with three corners that drives like a road course, The Devil's Triangle, and, naturally, the Bermuda Triangle because of the good driving careers that have been dashed here by drivers and teams that can best figure out the set-up for a car that will encounter very fast speeds around three very differently shaped turns.

The best analogy may come from the design of a continuous drive track of a bulldozer known as an elevated sprocket drive found on modern tractor vehicles. The shape delivers superior traction and allows the machine operator great handling performance and control of this earth-moving device.

Pocono Raceway's shape can be described as follows - The front/main straightaway (no-name) leading to turn one is .7083 of a mile or 3,740 feet which enters the Trenton Speedway shaped Turn 1 and catches the cars at 14° banking. The “Long Pond” (the second longest straightaway) stretches for .5786 of a mile or 3,055 feet between Turns One and Two and enters the "Tunnel Turn" (designed to be similar to the high-speed turns at Indianapolis Motor Speedway) at 8° banking. Lastly, the 'no-name' stretch from Turn Two to Turn Three is a mere .3371 of a mile or 1,780 feet and enters the final turn, the Milwaukee Mile Turn 3, at 6° banking. 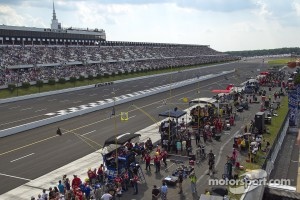 The unusual triangular configuration is conducive to many lead changes since this track sports the longest and widest straightaway with the longest and widest Pit Road of any on the modern NASCAR circuit. This gives Pocono a uniqueness that will certainly be exploited by the IZOD IndyCar Series open-wheeled DW12s.

During practice and qualifications leading up to this first open-wheel race, the traction of the cars to this unique asymmetrical track layout proved itself. All of the cars that had practiced on Thursday's first day of track activity broke the last open-wheeled race car speed record set by Emerson Fittipaldi at 211.715 mph, with the slowest practice fast lap recorded being Sebastian Saavedra of Dragon Racing at 215.001 mph. Compare this with the fastest speed registered by the other leading racing series to use the track - NASCAR's Joey Logano at 179.598 mph - June 9, 2012. 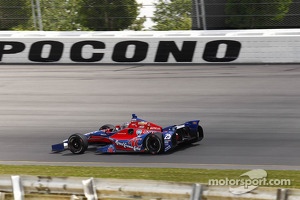 Qualifications had Andretti Autosport and Marco Andretti blister the track record by nearly 10 miles per hour with a 221.237 mph two lap average. Further, this 'home track' to the Andretti family, since the Nazareth, PA home base is only about a 20 minute drive from the "Tricky Triangle', had the three-wide starting front row filled with Andretti Autosport teammates of Ryan Hunter-Reay at P2 - 220.892 mph, and James Hinchcliffe at P3 - 220.431 mph. The only dark spot that could have had Andretti Autosport from filling the first four positions on the grid was that during his qualification run, EJ Viso's DW12 stepped out and hit the safer barrier wall ending his Lap 1 run at 219.952 mph.

With the IZOD IndyCar Series visiting this Magic Triangle for the first time in 24 years, traction is the order of the day and the elevated sprocket drive shape of Pocono Raceway delivers on its promise of this nation's most unique super-speedway.

Pagenaud 9th, Vautier 11th in qualifications at the "Tricky Triangle"