Pippa Mann racing for Coyne, and Clauson, at Pocono 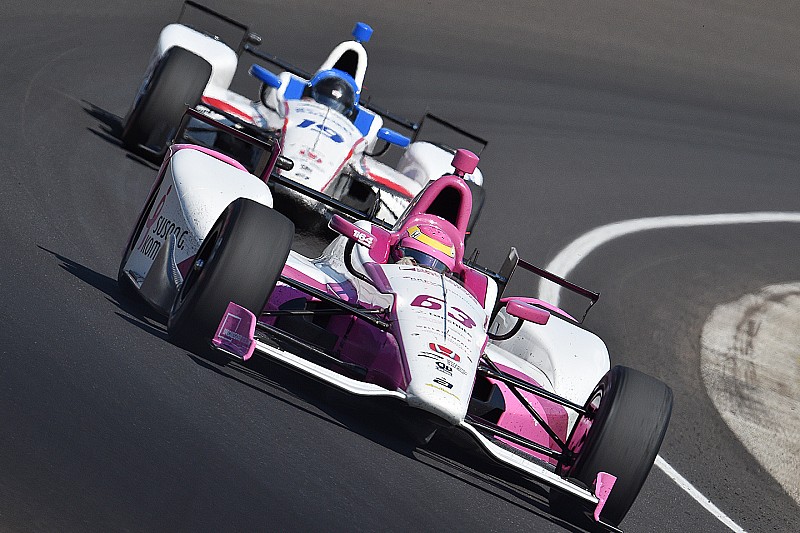 Pippa Mann will make her 15th official IndyCar start this Sunday as she takes over the #19 Dale Coyne Racing-Honda at Pocono Raceway, and she is pledging to race in honor of Indy 500 teammate Bryan Clauson.

The #19 Coyne entry has been driven by Luca Filippi, Gabby Chaves and RC Enerson so far this year. Mann has made one other start in 2016 piloting the #63 DCR-Honda as part of a four-strong Indy 500 lineup that included the late Bryan Clauson.

As a result of working with Clauson, Mann has pledged to race in his honor, as she and DCR incumbent Conor Daly help the “BC” logo reach Clauson’s aim of competing in 200 races this year. TConor Daly will be using Clauson's Indy 500 number, car #88, with the slogan "BC Forever".

Mann has drawn parallels with Clauson and another former teammate, Justin Wilson, who perished as a result of an accident at Pocono 12 months ago.

Mann told Motorsport.com: “What’s really weird, and hard, is that Bryan was so similar to Justin. Hard-working, unassuming, humble. They were good dudes who had time for people.

“The difference [between them] is that maybe IndyCar fans don’t know how good Bryan was. If you saw how good he was in real life, racing on dirt – something I had the privilege of seeing – you’d see he was really, really that good.

"And then you factor in how hard it was doing what he was doing each May, to step into an IndyCar after a 12 month gap. Look at how much he improved just this year with Dale Coyne Racing in that environment with us.

"I was really looking forward to racing with him again next May, because he was only going to get better. And not only am I massively grateful to Dale for giving me this opportunity at Pocono, I am also so proud to carry the ‘BC Still Chasing 200’ logo on my helmet this weekend.

“Bryan had told me that Pocono was another race he really wanted to run in an IndyCar, so between Conor and I, we’re proud to be making those starts for him."

No testing but Mann still confident

Mann has started two of the three previous IndyCar races at Pocono since the series returned to the tri-oval in 2013, following a 24-year hiatus. Last year’s contest on the 2.5-mile superspeedway saw Mann match her best IndyCar result yet with a 13th place. However, the whole event was darkened by the Wilson tragedy, plus Mann was 15 laps down because her engine stopped twice in the early stages and needed refiring.

Dale Coyne Racing was one of the few teams that didn’t test at Pocono last week, but Mann says that her previous experience of the place, and her experience of the handling of Indy cars on domed skids at Indianapolis this year, has elicited some confidence.

“It’s tough, but it’s not a new situation for me to be in,” she said, “and without wanting to sound like a broken record, I am just really grateful for the opportunity from Dale. But we had a good car at Pocono last year – except for that engine issue, obviously – and we had a good car at Indy this year.

“Pocono is another 500-mile race, so we just have to show up with realistic expectations. If we unload and keep working away at it, hopefully we can come away with a pretty decent result.

“The domed skid was a worry before the Indianapolis 500 this year, but racing at Indy and the knowledge I have of Pocono will help a lot. There are a couple of places where it could cause issues, but at the same time I’m hopeful that it won’t be too much of an issue most of the time.

Referencing her shunts in practice for the 100th running of the Indianapolis 500 in May, Mann commented: “The biggest thing I found with the domed skid – obviously very publicly! – was that even though it slows down the rotation of the car, the critical yaw angle is much, much lower.

"So the snap to spin happens quicker and with quite a small [steering-wheel] movement. It’s much more similar to the old [pre-DW12] car I drove in 2011, which also had a domed skid.

“That’s something we’ll have to pay attention to at Pocono, because you have to drive the car fairly sideways in traffic in order to get close to the car in front and try to get a run on them.

“But in 2013, when IndyCar came back to Pocono, we didn’t get to test before that one either. I was lucky enough to have Justin as my teammate that year, and we finished seventh and 15th.

“I’m not dumb enough to think it’s going to be easy, but if we treat this as a long race and have clean pitstops, I think we should be OK.”

Dixon: IndyCar suits me over “crazy” tech of F1