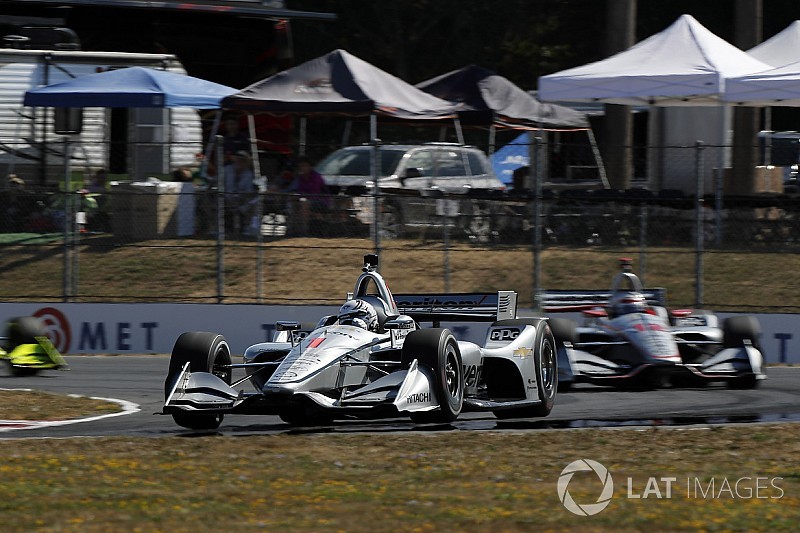 Despite all-but dropping out of the 2018 championship fight following Sunday’s race at Portland, both Will Power and Josef Newgarden are aiming to end the season on a high.

Power and Newgarden locked out the front row for Team Penske-Chevrolet, but ended the day classified 21st and 10th respectively, and now lie joint third in the championship on 511 points – 87 points behind Chip Ganassi Racing’s Scott Dixon and 58 adrift of Alexander Rossi of Andretti Autosport.

Power’s race started to unravel with a gearbox issue, and then a mid-race error while running ninth saw him slide into the Turn 12 tire wall and go a lap down. A pitlane speeding penalty and a recurrence of the gearbox problem left him seven laps down.

Newgarden, who fell to fourth at the start, gained a place due to Power’s mechanical gremlin, and then moved past Hunter-Reay just before the caution flew for Power’s accident on Lap 43. Four laps after the restart, Newgarden passed Rossi for the lead but then had his strategy undone by the yellow for Zach Veach’s accident. He and Rossi emerged from the pits in 16th and 17th, and in the final stint on red tires, lost out to Rossi at Turn 1. Newgarden came home 10th.

Said Power: “On the warm-up lap before the green, something happened to the gearbox. It jumped to neutral, I went into emergency mode and made it go into gear and thought, 'OK, that's all right.'

“Then, coming out of the hairpin on the first restart, it popped into neutral again and everyone behind me went past. Then I realized I couldn't use first gear.

“We were on a reasonable strategy and I made a mistake trying to keep [Matheus] Leist behind me. Then, the gearbox completely went. I'm not sure the gearbox would have made it the whole race, anyway.

“Man, it's a tough sport. It's too bad because it was actually going to be a reasonable day. We were on a path for two stops, but that's racing.

“Now, we just go to Sonoma, have fun and hopefully have a good day, have a good finish to the year.”

Said Newgarden: “We led some laps and I think we had a Verizon Chevrolet that was good enough to win it. It just didn't fall our way. You can't predict these IndyCar races.

“I wish we could get Lady Luck on our side one of these days. It just seems to walk away from us of late. [Scott] Dixon was able to take advantage of it today. Those guys are having a great year and luck falls on their side.

“Now, we will just go and try and win the season finale and do what we can. I don't think we have much of a shot at the championship. We've given it a good effort here at Team Penske and you can't ask much more out of the team."

For Power or Newgarden to win the championship, they would need to score maximum points [104] in the double-points finale at Sonoma, with Dixon finishing 22nd or worse and Rossi finishing ninth or worse.

Andretti: Alonso in IndyCar would have similar effect as Mansell