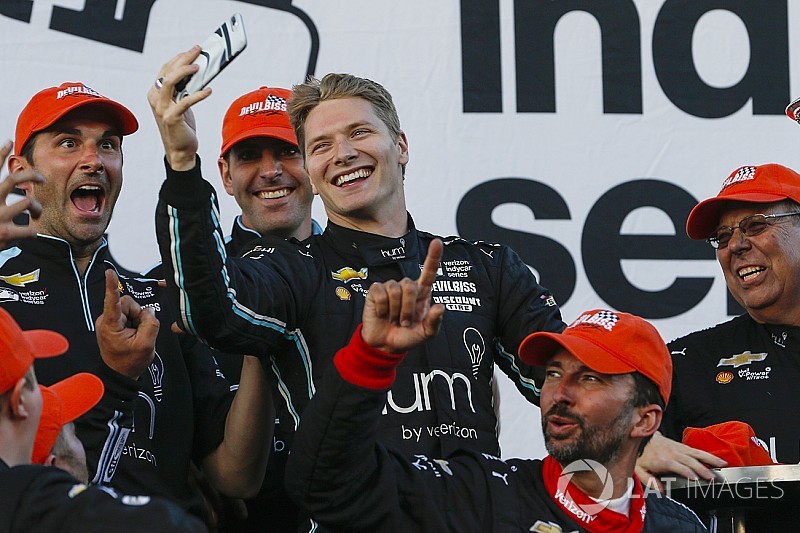 Reigning IndyCar champion Josef Newgarden and race engineer Brian Campe assess the challenge of the 2018 IndyCar and reveal why they think Team Penske-Chevrolet can maintain an edge over the opposition. By David Malsher.

When Juan Pablo Montoya and Oriol Servia started IndyCar testing with the 2018 aerokit last summer and reported its characteristics – looser on corner entry, less drag, higher top speed, more work for the driver in braking zones – some IndyCar observers who should know better (myself among them) instinctively started speculating which drivers the new car would or wouldn’t suit.

But the truth is that, usually the best drivers will adapt and find a way back to the front. They’ll pore over data until their eyes burn, analyze individual corners where they’re struggling compared with teammates, and come up with ideas to try in the next session. Supporting them, equally industrious engineers will move heaven and earth to formulate a car setup that suits their driver, even if – as with this year’s IndyCar – the rules leave little wiggle room for customization.

It’s for this reason that a technical do-over, particularly in a spec series, only temporarily dismantles the hierarchy among teams and drivers. Within a few days of testing, the best squads and top drivers are showing what makes them great.

Such is life at Team Penske, which won 10 races in each of the last two seasons using manufacturer aerokits, and who seems also to have a firm handle on the radically revised 2018 aero package.

Josef Newgarden, reigning champion, tells Motorsport.com: “Having lived and breathed the Penske experience for the last year and a bit, they’re an absolute force in any situation – same regs, new regs, whatever. They’ve operated at this level for 50 years and so they’re always going to be in the fight.

“We have too good a lineup of personnel, too strong an infrastructure, to not be in the championship hunt. Will we be leading that hunt? I do believe we have a strong foundation with this car already…”

“When the formula changes like this, it’s not so much the people or the aero package that make the difference but the processes that the teams use to find the speed,” he says. “That’s when a team’s strength can really show. Everyone in Team Penske – the engineers, the management, the mechanics, the drivers – all buy into our process, so when we get a challenge like a new car, we just go about doing the things the way we do them.

“And generally, that works out, but if it doesn’t, we’re also quick to pivot and say, ‘OK, we looked in the wrong area for speed, so let’s try elsewhere,’ and everyone works fast to try and get the solution.

“Having said that, I think the new car does put everyone on their toes, and you do have to look in every nook and cranny to maximize the package. We were all pretty comfortable with the manufacturer aerokits by last season, in their third year, so this new aerokit causes us to ask a lot more questions of ourselves. Where do you put the ride-height of the car? Will our setups from last year work – or at least provide a decent starting point? We even start looking back to the first version of the DW12 [2012-’14] to see what we ran then. You try to answer a lot of these questions at each test but there are still going to be a lot of unknowns at tracks we haven’t tested at… which is most of them!”

If both Newgarden and Campe sound confident – albeit eyes-wide-open and wary – they’re not ruling out the possibility of surprise front-runners this year. After citing Chip Ganassi Racing, Andretti Autosport and Rahal Letterman Lanigan Racing as the biggest threats over the long haul of a championship campaign, Newgarden adds: “With a new car you can get some interesting twists, just because our schedule is so diverse and because there are a lot of strong engineer/driver combinations throughout the field.

“This is IndyCar and we know there are a lot of potential race winners in it. So I think we may have some surprises because none of us has yet got a handle on setups for this car on every track.”

The known knowns, and known unknowns

Earlier this week at Sebring Raceway – allegedly still the only road course that can simulate a street course’s bumps – Newgarden and Campe ended their allotment of preseason test days on top of the times, although the champion is among the growing number of drivers who dismiss laptimes around the venue as a misguided barometer of true potential.

“That’s a bad rabbit-hole to go down – to put too much emphasis on times from Sebring,” says Newgarden. “Historically, Team Penske hasn’t been that strong there, so we know the laptimes aren’t very representative of what we’ll find when we get to St. Pete [where Penske has won eight of the last 13 races]. But still, it was a really natural pace that we had at Sebring, and by that I mean it wasn’t a lot of effort to find that speed. And in other respects it was a positive test, too. We got some direction on a lot of areas, and I also think Chevy has done a really good job. But as a general form guide for St. Pete? Nah, not much.”

It’s a theme that Campe echoes.

“It’s difficult to gauge where we’re at and what we really know about this car, because 1) it’s hard to accurately simulate St. Pete grip level at Sebring, and 2) on a genuine street course there are a lot of walls, so a driver may not be willing to push as hard as he would at a Sebring, Barber or Sonoma.

“So honestly, we don’t know what will happen at St. Petersburg. Therefore we’ll have to bring everything in our arsenal so we’re ready for anything.”

If those are the known unknowns, the known knowns are simpler to figure out. For one thing, Newgarden likes his new rig and he’s enjoying the technical journey of exploring its potential.

“The new car is fun to drive and it moves around a lot more,” he says, “but it’s also created a new window for learning. You have to learn how to drive it, first of all, but also you have to go looking for new setup details that will make you better than the guys around you, and whoever does that should come out of the gates strong and hold that to the finish line.

“I like those challenges because I feel like I can do a good job with the engineers and figure it out quicker than the rest. I see a new car as an opportunity.”

Campe throws in another known fact that will become a theme of the season – tire degradation has increased, because a) IndyCar and its top drivers wanted it that way, b) Firestone responded, and c) the cars, shorn of so much downforce, are sliding more.

“Drivers are going to have to be smooth to save the tires so they’re strong for a whole stint,” he says. “I’ve been constantly on Josef about it throughout testing! I’ll say, ‘OK, that’s a fast setup now, but how’s it going to be 20 laps into a stint at St. Pete? Will the rear tires be going off too much? The front tires?’ It’s another of these unknowns, but we do know that drivers will have to be smooth, and that will require a lot of discipline.”

Despite Helio Castroneves’ switch to Penske’s IMSA team, and the IndyCar squad’s reduction to three full-time entries, Roger Penske still has a driver lineup that is the envy of pitlane. Newgarden, Will Power and Simon Pagenaud each has a championship to his name, has a broad spectrum of strengths and possesses the work ethic necessary to exploit his potential. Power and Pagenaud also have near-telepathic relationships with their respective race engineers, Dave Faustino and Ben Bretzman, and one imagines Newgarden and Campe will soon develop something similar.

Campe regards a three-strong team as being helpful, especially in a year of substantial technical change, but doesn’t anticipate practice sessions where the #1 (Newgarden), #12 (Power) and #22 (Pagenaud) are sent out with wildly varying setups.

“I don’t think we’ll intentionally experiment with our ideas across the cars,” he says. “We do that in testing, but at the races you have to give the driver what you think is best for them. Our drivers are experienced enough to know what they want and we know what they want, so on race weekends we typically give them what they feel they need to go fast.

“Then after a session, Josef and I can look at Will’s data, and I’ll say, ‘OK, you’re slow compared to Will at this corner. What do we need to do to make you as fast as him there?’ And Josef will either say, ‘Oh, I can change my driving technique,’ or ‘That’s what I was talking about when I said I had too much understeer,’ and so I’ll work on that. That’s the real advantage of having three top drivers in the one team. They can constantly learn from each other.”

Interestingly, Newgarden believes the new car has slightly reduced the amount of commonality between the three drivers’ individual setup preferences.

He observes: “For what we’d consider the big stuff in setup, if one of us finds something he likes, we usually all like it, and if one of us dislikes something, it’s hated by all of us! That’s been very useful at tests, because it means that we’re each capable of developing a setup and delivering something that will take all of us a step forward.

“But I think the new car has separated us more in terms fine-tuning; it’s exaggerated some of the detail differences that we had last year. With the old car, we’d usually converge on the same setup, and the cars had so much grip, it sort of hid the really small preferences we individually wanted. In this year’s car, the differences between what Will likes, what Simon likes and what I like seem to have been magnified a bit.”

With 2018 marking Power’s ninth full season at Penske and Pagenaud’s fourth, Newgarden is still the new kid in the Penske School of Prodigies, but one shouldn’t underestimate his contribution to the team’s progress as a whole.

Says Campe: “Last year, Josef did a bit of adapting to Penske setup philosophy, and we did a bit of adapting to Josef’s philosophy. He had come from another Chevy team, Ed Carpenter Racing, and with manufacturer aerokits frozen for 2017, he opened our eyes to a few things. That’s the great aspect of getting new blood in the door and it was the same when Simon joined us from Schmidt Peterson in 2015; we gained a fresh perspective.

“So for each race, Josef and I adopted the attitude of, ‘This is our first time here together, so let’s treat it like neither of us have been here before. You tell me where the car’s not doing what you want it to do, and I’ll try and fix it.’ And so we learned fast and hit our stride after Indy.

“But there’s not one driver who leads technical direction or steers the team – all three contribute. It genuinely is a group effort, same as between race engineers, chief mechanics and so on.”

Which of Penske’s three crews will ultimately prevail is conjecture for a different story, but it would be a brave person – or a Scott Dixon/Ganassi fan – who’d bet against the top Penske driver proving to be the 2018 IndyCar champion. And that’s despite the new car… or rather, because of the new car.

Why 2018 is just the start of an IndyCar revival