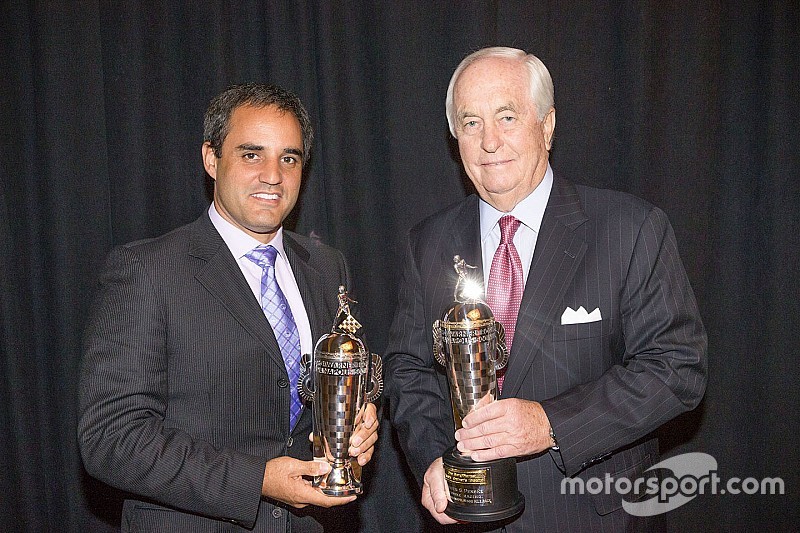 The winners of the 99th running of the Indianapolis 500 were recognized in traditional style by Borg-Warner tonight in Detroit. Juan Pablo Montoya, who in December revealed his second bas-relief face on the Borg-Warner Trophy, received his “Baby Borg” as winning driver, and Roger Penske received his as winning team owner.

BorgWarner CEO James Verrier presented the miniature versions of the 5ft 4in Borg-Warner Trophy on which is embossed the face of each Indy 500 winner. A Baby Borg has been presented to the winning driver of the “500” since 1988, while the winning team owner has also received one since 1997.

It has become a tradition for this ceremony to take place at the North American International Auto Show in Detroit, and Penske told Motorsport.com the location of the presentation meant a lot to him.

He said: “It’s our home city and we’ve done a lot in Detroit to try and support the community. The infrastructure, IndyCar’s Belle Isle Grand Prix, being chairman of the Super Bowl hosting committee [XL in 2006] – we’ve always tried to support the city.

“So to receive this award from Borg-Warner tonight at a congress of automotive world leaders in America’s iconic auto-making city, that meant a lot. It’s one thing to get honored by racers but this was a different clientele, business people, and part of our success over time has been combining racing with our business.”

Montoya initially joked that he would complain to BorgWarner that his version of the Baby Borg didn’t carry any gold, unlike his team owner’s, but went on to say that he found both the ceremony and the trophy, “pretty cool.”

He said: “It feels weird to be looking back at something that happened eight months ago, when we’re closer to the next one, but I think that does remind you how big and historic the race is. That’s good.

“It’s fun to go racing with Penske, knowing you’re going to have a shot at winning, you’re going to be competitive. So for the 100th this year, we just have to go and do our best again and see how it turns out.”

Penske admitted that Montoya’s victory helped the team get over the disappointment of the 2014 Indy 500, when Ryan Hunter-Reay of Andretti Autosport defeated Team Penske’s Helio Castroneves by just 0.06sec.

“That was a tough one,” he agreed, “because Helio drove his heart out that day and he was quite surprised when Hunter-Reay made that great move going into Turn 3. But I think it was also tough because we’d really had a dry spell, since Helio won with us in 2009. We’d been competitive since then but always missed out, and then it was so close in 2014.

Montoya admitted the Baby Borg was his only memento of the day. He remarked: “The overalls and everything, they belong to the team. You know, Roger gives me a car to win, so for me, he can keep whatever he wants.”

The closing stages of the 99th Indy 500 featured a close fight between the Team Penske entries of Montoya and Will Power – who fell 0.1046sec short of beating his teammate – and the Chip Ganassi Racing entries of Charlie Kimball and Scott Dixon. The top four were covered by just 1.092sec at the checkered flag, but Roger Penske remembered trusting his drivers to not let the Ganassi cars through for the win.

“The nature of Indy these days, and the nature of the rules, means that once you get a run on someone at those speeds, you can’t block them,” recalled Penske. “They had been going back and forth all day long, and Juan had a very fast car. We saw him come right from the back.

“Going through my mind with four or five laps to go was that Dixon was strong, [Tony] Kanaan had gone out and he had been a key competitor, and [Charlie] Kimball was still lurking in the background.

“Simon Pagenaud was strong – maybe the fastest of our cars – but he was probably a little anxious as the others around him started picking up the pace in the closing stages. But Juan, the way he races and with his experience, he knew he didn’t have to do anything except make sure he was there in the final 25 laps.

“And that’s exactly how he executed. He made a clean pass on Will, and although I think he had a moment over in Turn 2 that could have ended

his day, otherwise it was a flawless race.”

Montoya played down the final shootout. He said: “If you work hard and come up with the best setup over the month [of May] you should come out pretty good.

“We went to the back after we got hit [by Simona De Silvestro’s Andretti Autosport car] but we had a strong enough car in traffic to come through the field.”

Penske paid tribute to his team, and the crews of all four Team Penske entries.

“I would say that by the time we got to Indy, our pit crews were absolutely on it,” he said. “We have a strength coach and an athletic director now, and the crew guys are working hard on every single thing that they’re doing. So many times we’ve lost that race because of a poor pit stop – a wheel loose, a fuel hose left in the car, running over an air hose, and so on – but the crews executed flawlessly this year.

“Juan’s crew had to deal with adversity at the beginning, repairing the damage from when he got run into near the start of the race, but they did their job. It really was a team win.”

100th Indy and beyond

The 1988 Indy 500, in which Penske locked out the front row of the three-by-three grid and finished first and third with Rick Mears and Al Unser, respectively, is recalled as one of the squad’s most dominant performances at Indianapolis Motor Speedway. However, Roger Penske believes last year’s showing matches or even betters that day.

“I think in 2015 we had the best-stacked deck we’ve ever had at the Speedway,” said Penske, “and I think the fact we have the same lineup in 2016 – same drivers, same crew chiefs, same race engineers, same pit crews – gives us an enviable advantage this year.”

However, the Shaker Heights, Ohio-born native hinted that he had instilled modesty in a team that has racked up 16 wins at the Indy 500 since his first victory, with Mark Donohue, back in 1972.

“We’re quiet winners, I don’t think we overdo the joy,” he said. “We remain poised. The team knows what we’ve accomplished, and if we remain focused and professional about it, we’re hard to beat. But Rahal, Andretti, Ganassi, Schmidt – they can all be winners at Indy, because it’s a long-distance race, and as we know, anything can happen.”

Penske expressed analytical objectivity in assessing his team’s 2015 season, in which his cars frequently proved the fastest in qualifying, only to hit snags on race day. Although a Team Penske car started from pole in 13 of the 16 races in 2015, the team scored just three wins – two for Montoya, one for Power – and the Colombian missed out on the series championship in a tie-break with Ganassi’s Scott Dixon.

“We were fast enough but we didn’t execute in the races,” said Penske. “We should have won more races, but sometimes we were leading when the pits closed under a full-course yellow, and that put us in a real bad situation.

“But technically, we really did understand the aero kit. Chevrolet did an excellent job, and our guys have done a tremendous amount of work in the wind tunnel the last few months. I believe we’re doing everything we can to remain at the very front this season.”