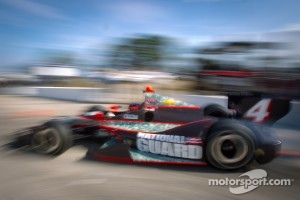 ST. PETERSBURG, Fla. - (March 25, 2012) – As National Guard Panther Racing driver JR Hildebrand pulled alongside Team Penske’s Will Power to make a pass for seventh place with just four laps remaining in the Grand Prix of St. Pete, his car stalled and coasted to a stop. A fuel pressure problem had concluded what was an otherwise spirited run by Hildebrand and Panther’s Chevy-powered team, which slipped from what would have been a near-Top Five to a final finishing position of 19th-place.

Hildebrand started in the 18th position and was in 17th on Lap 12 when the team pitted for the first time, but a mechanical issue with the hub of the right-rear wheel during the stop caused a long delay in pit lane, and the No. 4 car returned to thefield in the 24th position. It did little to faze Hildebrand, whoafter encouraging his team on the radio during the caution laps, quickly began a climb through the field.

As teams cycled through their pit stops, JR made it all the way to the lead of the race on Lap 72 and stayed at the point for three laps before being passed by eventual-winner Helio Castroneves just before the team made its final pit stop on Lap 75. He returned to the field in 11th position and began to quickly move his way through the field; passing Franchitti for tenth on Lap 80, Andretti for ninth on Lap 84 and, after moving to eighth when EJ Viso pitted for fuel, he quickly tracked down Power and Simon Pagenaud in the closing laps. After closing the gap on the sixth and seventh place cars, he popped out to make a move on Power into Turn One on Lap 97 when a failure in fuel pressure rendered the team helpless as the car coasted to a 19th-place finish.

This was the fourth career IndyCar Series race Hildebrand has led in his 20 career starts. He finished 11th at St. Pete last season in what was his first start in Panther’s No. 4 National Guard entry. Panther’s best finish on the 14-turn, 1.8-mile temporary street circuit was a fifth-place finish with Vitor Meira in 2006.

The IZOD IndyCar Series will now travel to Barber Motorsports Park for the Grand Prix of Alabama, which will be broadcast next live next Sunday on NBC Sports at 2 pm (EST), with additional coverageprovided by the IMS Radio Network, XM Channel 145 ad Sirius Channel 121.

JR Hildebrand, No. 4 National Guard Chevrolet: “In that last stint we passed Dario (Franchitti), Marco (Andretti) and were going to be able to easily get by Will (Power) and Simon (Pagenaud) for a potential TopFive. As frustrating as it is that we don’t have anything on a piece of paper to show how well we performed today, I’m really jacked up about the pace we had all race and that the National Guard car felt really good the whole time. I’m just ready to keep this moving, and the National Guard boys did so well all day in the pits, even after we had a mechanical issue on a stop that sent us all the way back to dead last. We knew our Chevy was good all through practice and we learned a lot about the racecar today because it didn’t matter what tire we were on, we were fast as the leaders the entire time. This gives all of us the confidence that we can be doing this on a more regular basis on any type oftrack. Panther has always been known for their oval package, but I think we’re here to show everybody this year that on any type of track we can get up there with the guys at the front and beat anybody.”