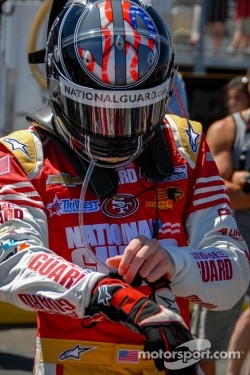 FONTANA, Calif. (September 13, 2012) – A busy day at Auto Club Speedway for National Guard Panther Racing driver JR Hildebrand and his crew concluded with the team having turned nearly 200 laps in its No. 4 National Guard machine, and scheduled for a fresh Chevrolet engine in preparation for this weekend’s 500-mile IndyCar season finale. Hildebrand is currently tied in the 12th position with teammate Oriol Servia in the IndyCar Series championship standings, with both drivers 30 points outside of the top ten in the championship.

In the team’s history at Auto Club Speedway Panther has captured two race victories (2002, 2003 with Sam Hornish Jr.) and in 2003 set the closed-course speed record for average speed during a race with an average speed of 207.151 mph. The team last raced at California Speedway in 2005 with Tomas Scheckter and Tomas Enge in what – at the time – was Chevrolet’s last IndyCar Series race before returning this season. Scheckter led 80 laps in that race before finishing in the seventh position.

One of Hildebrand’s best drives of the 2012 season came on a large oval earlier this year at Texas Motor Speedway. Despite starting in the 23rd position, Hildebrand drove to a Top Five finish that included many hairy moments, as the driver’s No. 4 Chevrolet was extremely loose during several points during the race, and on two occasions he overcame falling a lap down. The event was the first where IndyCar featured its low-downforce oval package, but Hildebrand responded with one of the team’s best results of the season.

IndyCar, Panther Remember IndyCar Leader Scott Romebke The team’s sister company, Panther Graphics, produced a decal honoring Rahal Letterman Lanigan Racing principle Scott Roembke, who passed away earlier this week, that it will run on Hildebrand’s No. 4 National Guard Chevrolet this weekend. The team also gave decals to Rahal’s team to distribute to the rest of the teams in the series to run on their cars this weekend.

Panther Managing Partner & CEO John Barnes released the following statement earlier this weekend upon learning of Roembke’s passing: “Scott Roembke was a dear friend of mine and was a true leader in our profession. He was one of the few people in our sport that I sought out for advice, and I always trusted his word. Scott was a guy that never wanted to take any credit, but never hesitated to take charge. God has blessed all of us in this profession with the opportunity to be a small part of his life. Both myself, and all of us at Panther Racing and throughout the racing community, will miss him dearly. Our prayers are with his family during this difficult time.”

JR Hildebrand, No. 4 National Guard Chevrolet: “We definitely found some stuff in our last run in the test that I was really happy about. We had a cut tire late, but ended up slamming through like 70 laps there at the end of the day, which was a lot of running. We were able to make a couple changes that made a huge difference, and we were one of the only cars out there that were doing full fuel-stint runs. It’s hard to tell where we are when there are other guys out there with half tanks and that kind of stuff, but we definitely picked up some pace and the car started feeling a lot better and we were arguably better the last five laps than we were in the middle of the stint. Overall I’m really pleased that we found a good direction for the race Saturday, and I’m also happy we were able to get to a point where we can start the weekend with a fresh Chevrolet engine without having to take any penalty. At the end of the day, our primary focus is raceday and I’m pretty happy with where we are.”

Conway steps down and Cunningham steps up for A.J. Foyt at Fontana