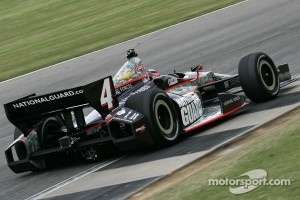 LEEDS, Alabama - (March 31, 2012) – The National Guard Panther Racing team advanced to the Firestone Fast Six for the first time since 2005 Saturday during qualifications for tomorrow’s Grand Prix of Alabama, where driver JR Hildebrand will start in the fifth position. For Hildebrand, the qualifying effort was his career-best on a non-oval track and marked the first time the 24-year-old Californian has advanced past thefirst round of IndyCar Series qualifications. His previous non-oval best qualification effort was 13th at Mid-Ohio last season and his best career start overall is fourth position, which he earned at Iowa Speedway last year.

Hildebrand posted a total of six laps in the first qualification group and advanced after finishing sixth with a top lap of 117.356 mph, 1:10.5546 seconds. The second round of qualifications was shortened by a red flag after Ryan Hunter-Reay spun and stalled off-course, but Hildebrand had already posted the third-quickest lap (117.740 mph, 1:10.3243 seconds) before the accident concluded the session. In the Firestone Fast Six, JR finished fifth overall with a top lap of 116.495 mph, 1:11.0759 seconds.

Today’s result is Panther’s best non-oval start since Tomas Enge started in fourth position at Infineon Raceway in 2005. Prior to today Enge was the only Panther driver to advance to the Firestone Fast Six, which he did on two occasions in 2005; Infineon and St. Petersburg. Saturday’s effort was also the first time Panther has advanced past the first round ofIndyCar qualifications since Dan Wheldon qualified 12th at Infineon in 2010.

Hildebrand will start in the third row alongside former IndyCar champion Tony Kanaan for tomorrow’s 90-lap event. Team Chevy driver Helio Castroneves captured the pole position and will be joined by another Chevrolet-powered driver, James Hinchcliffe, on the outside of the front row. Chevrolet has captured both pole positions of the IndyCar Seriesseason and last week in St. Petersburg Castroneves won Chevy’s first IndyCar Series race since Panther’s Tomas Scheckter was victorious at Texas Motor Speedway in 2005.

Panther’s Qualification History at Barber: Sunday will mark Panther’s third start on the 17-turn, 2.38-mile track at Barber Motorsports Park and its second with Hildebrand. Panther has completed 180 of a possible 180 laps at Barber the past two years with Hildebrand and Dan Wheldon. The team conducted one offseasontest here earlier this year in the DW12 chassis.

QUOTABLE:
JR Hildebrand, No. 4 National Guard Chevrolet:
“I’m stoked for all the National Guard Chevy guys. Our biggest goal this offseason was to focus on improving our road and street course program and it’s great to see that paying off for us. We put a high priority on that and this obviously goes a long way to show that we’re making some headway. We drew a good group and benefited from (Ryan) Hunter-Reay’s spin in the second group as well, but we came in here with a solid baseline. We’re glad to be able to put a result like this on a piece of paper now. We will take it and see what we have fortomorrow. At Barber you have to be able to not make mistakes, and you have to have a car that will last throughout the duration of a stint, no matter what your tire selection. We’ll be looking at some data tonight to make sure our racecar is solid throughout the day.”